San Antonio chef Tim Rattray visited Dallas last week to be the guest chef at Knife for one in a series of special collaboration dinners benefiting RED*. Throughout the week, Knife’s chef John Tesar invited five chefs including Aaron Franklin of Austin’s Franklin Barbecue and Rattray from the Granary which is known for their boundary-pushing barbecue menu featuring items like brisket ramen and smoked shoulder clod with quinoa. Some of Rattray’s courses in Dallas were pretty straightforward like a pecan-grilled quail, but one required two days of prep and utilized an unusual cut of beef – the ribeye cap. 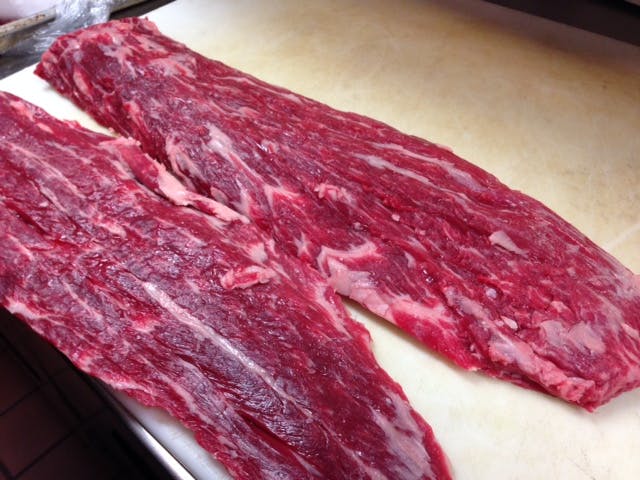 The ribeye cap is also sometimes called the deckle or more precisely the spinalis. It is the muscle that makes up the outer edge of beef surrounding the eye of a ribeye steak. When removed intact from a large prime rib roast it looks like a long thin steak similar in proportion to a skirt steak. It’s one of the most well-marlbled and tender cuts of beef that exists, which is why it’s so highly prized. Davey Griffin, a professor at Texas A&M’s Rosenthal Meat Center has been known to tell a crowd of students that he always eats the spinalis first in case he dies before he gets to the rest of the steak. It’s good eating, so I was excited to see it on Rattray’s draft menu. The day before the dinner, I met him in Knife’s kitchen to watch every step of the process from raw beef to composed dish.

1. Slice the spinalis in half. Note the heavy marbling. 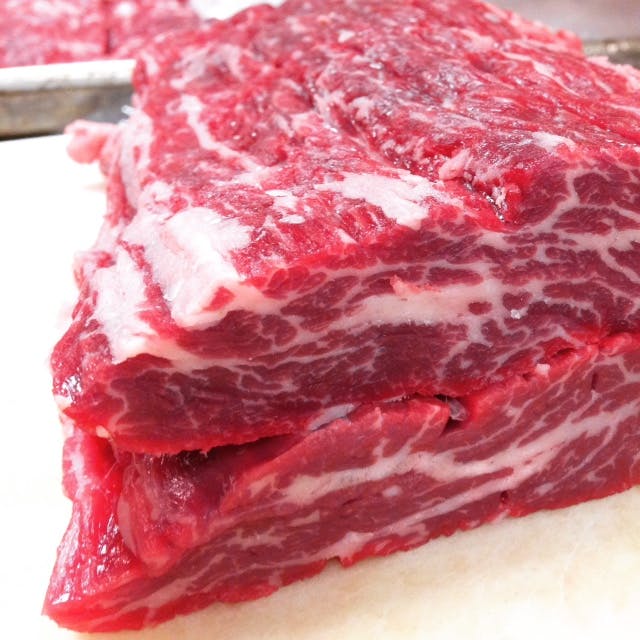 2. Sprinkle on powdered transglutaminase, aka meat glue, which bonds together proteins. 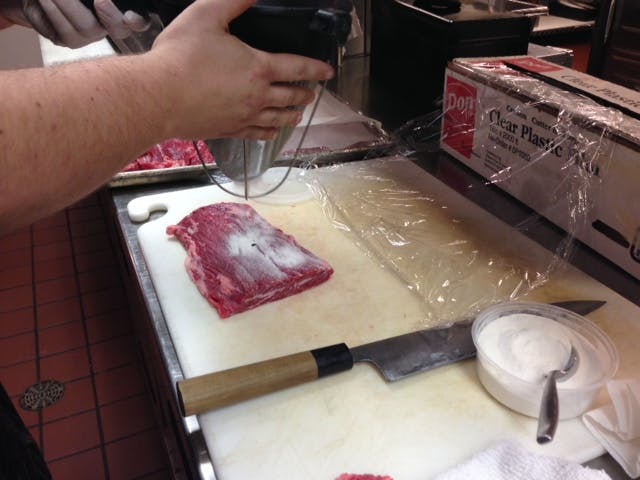 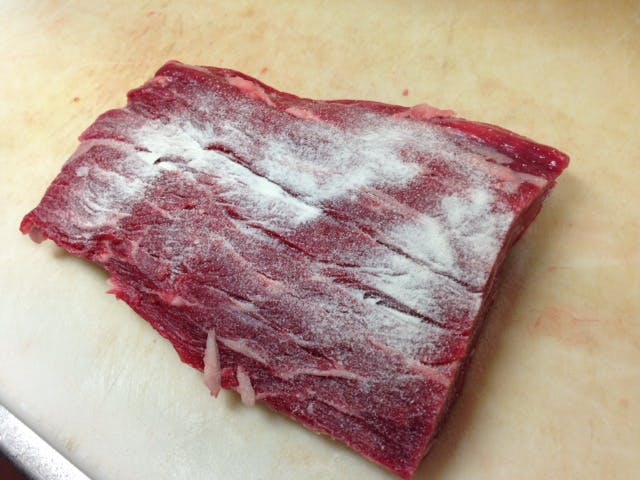 3. Roll the meat and shrink wrap the rolled sections. 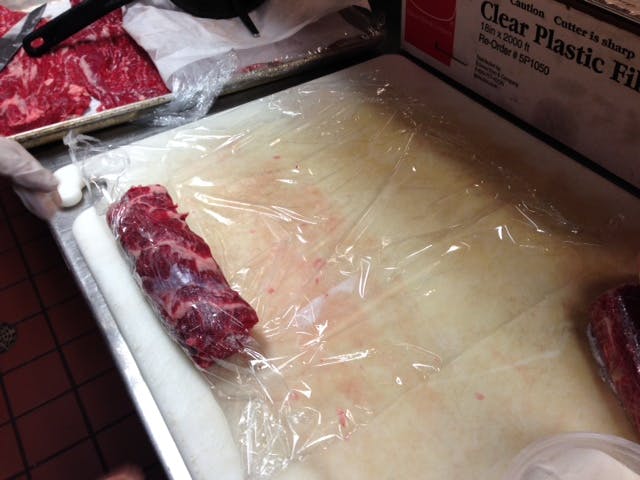 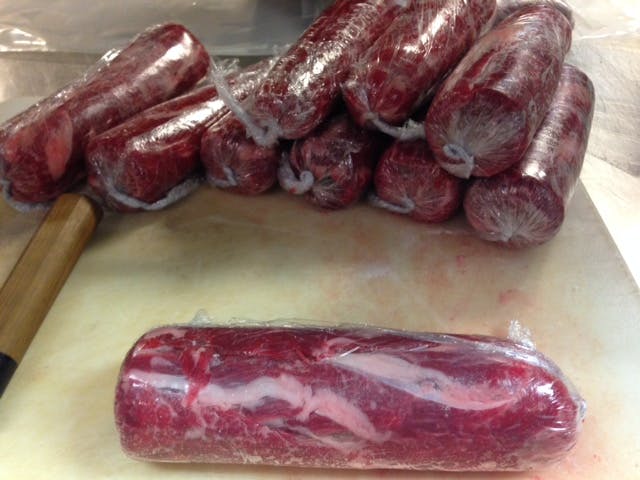 4. Seal meat cylinders in cryovac to refrigerate overnight and set the meat glue. 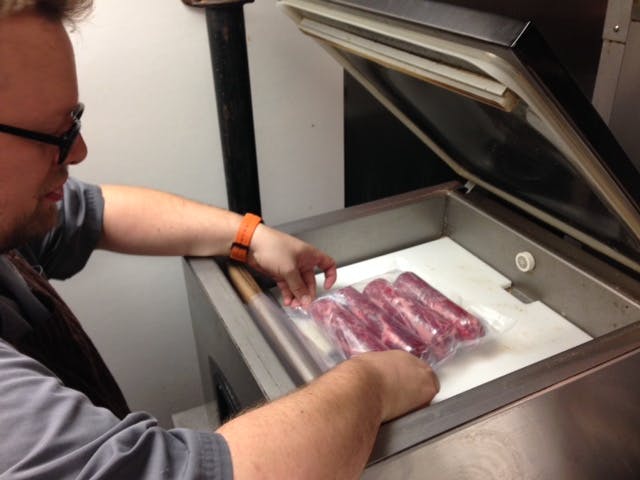 5. After seasoning with smoked soy sauce (which tastes like liquid beef jerky) the beef goes into a sous vide bath. 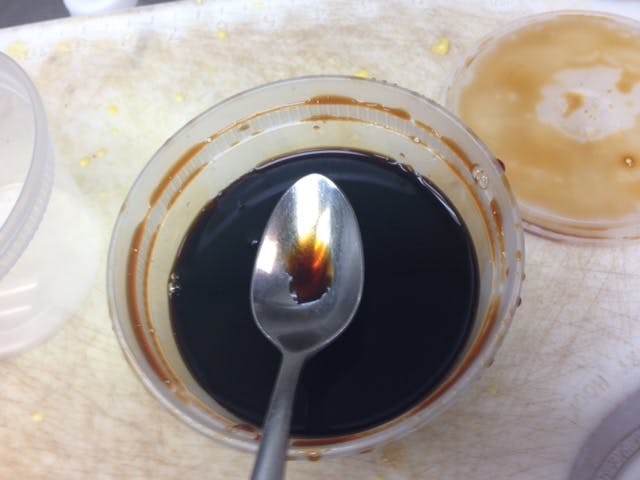 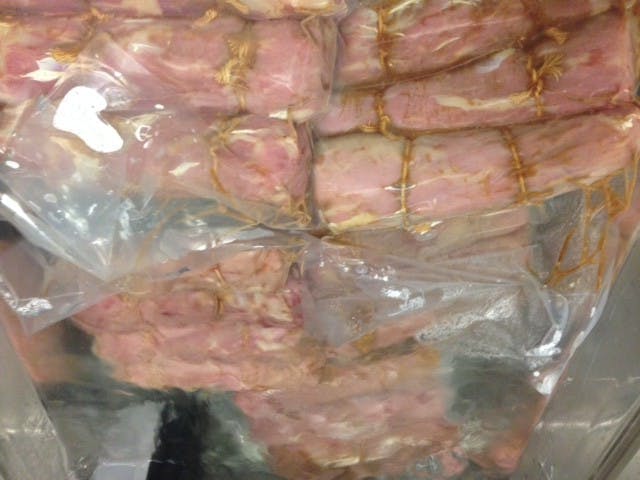 6. The beef is then removed and finished over a wood fire. Such is life in a busy kitchen, the fire went out mid-way through cooking, so they were finished in a broiler. 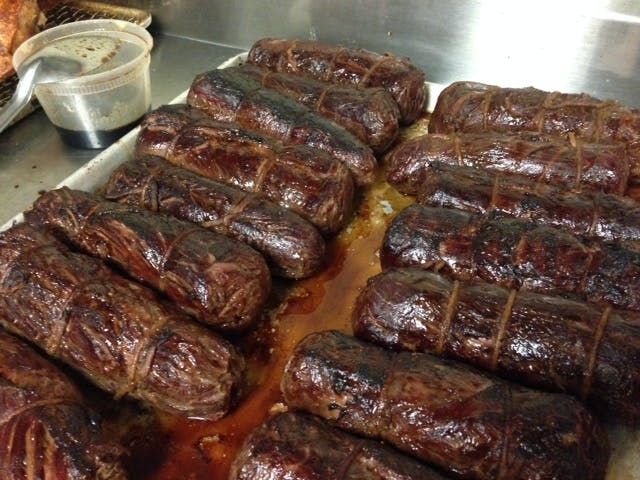 7. Now cooked completely, the rolled sections of spinalis were cut into medallions. 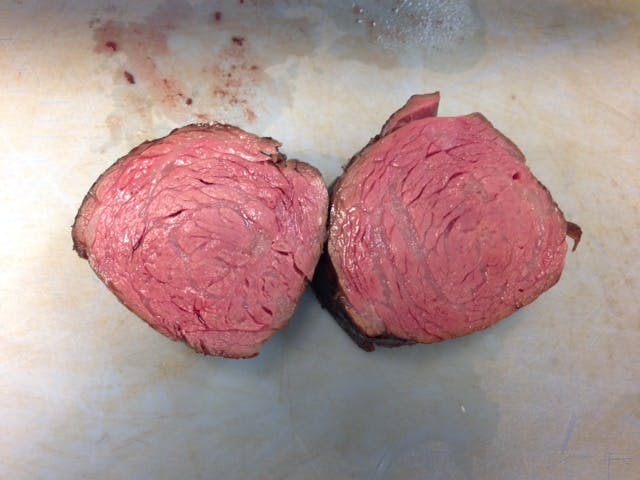 8. Then they were plated with blanched sea beans and a sauce made with blood orange zest and Thai chilis. 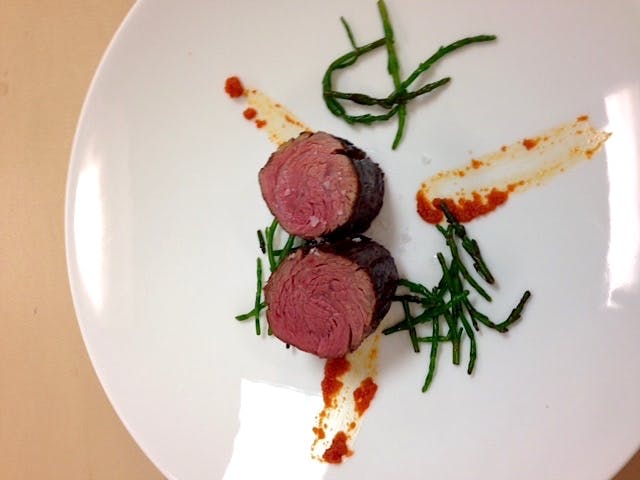 The sous vide process ensured an even doneness from edge to edge, but it was the cut of beef that did the most to keep it so incredibly juicy and tender. While the wood fire didn’t pan out, the smokiness from the soy sauce was apparent in every bite from one of the finer pieces of beef I can remember eating.

*Full disclosure, I attended gratis as a diner at the press table.