Brown sugar, white sugar, and honey are all common sweeteners in the pitmaster’s arsenal. They’re great in a pork rub or on chicken to accelerate the browning of the skin. In fact, sugar might be the most popular ingredient in commercial barbecue rubs, which is why I was excited to learn about a new way to use the sweet stuff.

Last month, Serious Eats published a story by Stella Parks about toasted sugar. It’s a method of slow roasting sugar in the oven to create a caramel flavor without burning it over high heat. The result is what Parks calls “granulated caramel,” and it can be used just like brown or white sugar in recipes like, say, barbecue rubs. Immediately after reading the article, I stuck a pan of white sugar in a 300 degree oven. I kept it in for three-and-a-half hours until the sugar just started to melt, then cooled it, and finely ground it in a food processor. It was ready to use in a test cook the following day.

For comparison’s sake, I smoked three racks of baby back ribs with different rubs. The rub recipes were simple: equal parts kosher salt, fresh ground pepper, and sugar. Each of the racks got a different kind of sugar—brown, white, or toasted—in the rub. I smoked them with pecan wood at 250 degrees for about five hours. While they smoked, I tried a similar comparison with a glaze. I used equal parts bottled sauce and a sweetener. This time I compared brown sugar and the toasted sugar, but added honey into the mix too. The glaze comparison wasn’t a revelation. Both the brown and toasted sugar tasted about the same, the subtle notes of varying sweetness too hard to distinguish along with all of the other savory flavors, and the honey was just too heavy with flavor. Honestly, it made a better glaze with all three mixed together.

When the ribs were done smoking, I tried them fresh out from the smoker without sauce (see top photo). The ribs using white sugar only were easily the least interesting, and the subtle variation of brown sugar versus toasted sugar sweetness was hard to highlight mixed in along with all the salt and black pepper, so I modified things on the next cook.

The second go around, I figured I would try to caramelize the sugar onto the ribs with a higher heat cooking method. This time, I split a rack of baby backs in half (it should be noted that I prefer savory St. Louis ribs or spares, but I just like sweetness on a baby back rib) and sprinkled both halves lightly with salt and pepper. Then I coated one half heavily with brown sugar, and other with a thick layer of toasted sugar. 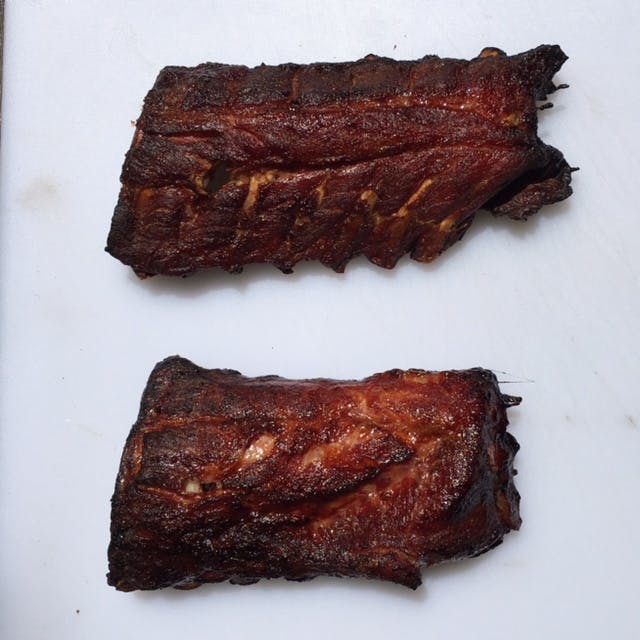 After three-and-a-half hours in the Pit Barrel Cooker at about 350-400 degrees, they were ready. The outer bark was a hearty layer on both ribs, but the toasted sugar half glistened. The brown sugar half was plenty sweet, but lacked the depth of sweetness in the other half. With the toasted sugar rub, the ribs took on a candied flavor, and a texture similar to char siu pork. It was a solid winner over the brown sugar version.

Making the big batch of toasted sugar was a breeze, so I have plenty more for my next rack of ribs, or maybe even chicken. Whatever the protein, I’m just happy to have a new rub ingredient to play with.