We love our beef in Texas, and historically, the rest of the nation did too. According to numbers from the USDA, beef and pork battled for protein supremacy until about 1950, when beef took a clear lead for the next six decades. Today, with falling beef consumption and the surging popularity of chicken, poultry is now on top.

The trickle-down effect is that poultry is showing up more often on Texas barbecue menus. Whether it’s turkey breast, chicken—or even duck—these options are generally seen as “healthier,” especially when compared to pork ribs or smoked brisket.

Because it’s hard to muck up smoking turkey breast, it’s easier to find a good version of it out there than it is to find a great piece of smoked chicken. When it comes to cooking a whole chicken, it takes more skill (or maybe luck?) to perfectly time the simultaneous doneness of white meat, dark meat, and chicken skin.

I guess as a way to further capitalize on offering a “healthy option,” some barbecue joints smoke boneless, skinless chicken breasts, but I haven’t had a bite of even one that was memorable. They dry out easily, and you can forget about trying to hold them in a hotbox successfully for any length of time. One joint in Tyler, Stanley’s Famous Pit Bar-B-Q, has figured out the boneless chicken thigh, which they put one on a sandwich called the Mother Clucker, the best barbecue sandwich in Texas.

For the purposes of this list, I decided to focus solely on chicken-on-the-bone. More parameters for making the cut: (1) Juicy meat is paramount, as is crispy skin, a tough combination to pull of since smoking too low and slow—the standard method for brisket and pork—can turn the skin leathery, while cooking too long dries out the meat. (2) Seasoning needs to be on point, another challenge as you want enough to penetrate beyond the skin, but not so much rub or smoke that it compromises the flavor profile experience.

Below are twenty Texas barbecue joints (listed alphabetically) who know how to balance it all to put out a great piece of, or even half of, a smoked chicken. In fact, the half chicken seems to be the preferred cut of chicken across the state. And yes, there is plenty of variety when it comes to cuts of chicken. The USDA recognizes sixty-plus different ways to cut and package a single chicken. The half-chicken’s technical code is 70201, but if I had the choice I’d go for a 71001, or a full leg quarter.

4T’s Bar-B-Q in Forney – The rub is sweet and goes on heavy, but the skin is crispy. Even the white meat, always a challenge to smoke, is juicy. 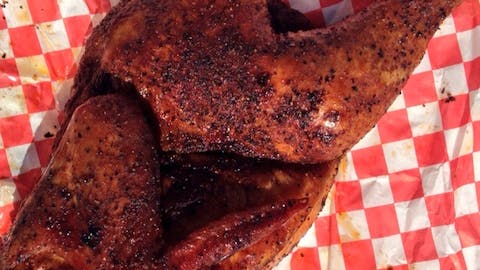 BBQ on the Brazos in Cresson – Even in the mid-afternoon, this half chicken was still moist. It’s also on the smokier side with a bold flavor. 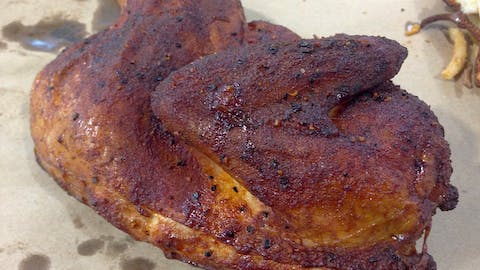 Brown’s Bar-B-Que in Austin – It’s the worst photo of the bunch (you can see a better one on Brown’s Facebook page), but the skin on this chicken thigh packs some serious crunch. 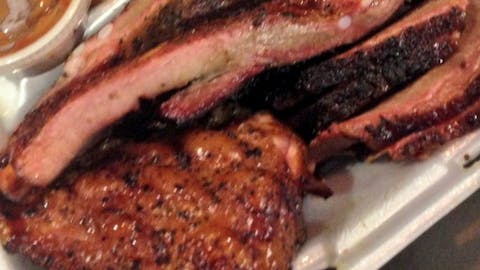 Cooper’s Old Time Pit Bar-B-Que in Llano – At Cooper’s it’s all about the salt and vinegar. The salty rub is laid on thick before smoking, then the finished half chicken is dunked into the vinegar-heavy sauce. It’s a great marriage of acid, smoke, and salt. 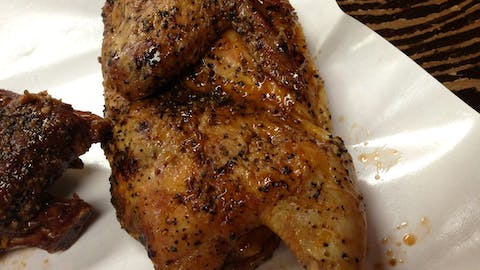 Fargo’s Pit BBQ in Bryan – This was the smoked chicken that launched this whole quest. I had eaten so many bad versions that I had made a habit of skipping it—until I bit into this smokey, salty poultry. 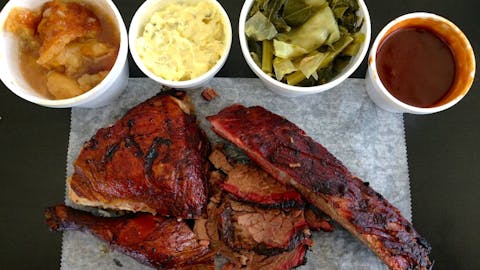 Hays County Bar-B-Que in San Marcos – Smoke and black pepper dominate the flavors here. A dip into their Texas Heat sauce doesn’t hurt either, although the well-cooked meat doesn’t require it. 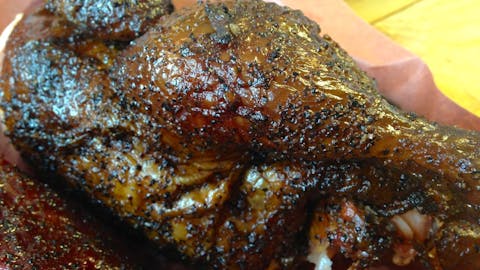 Hutchins BBQ in McKinney – For a chicken that would win competitions and the hearts of die-hard brisket fans, look no further than Hutchins. The saltiness of the well smoked skin helps to flavor every juicy bite. 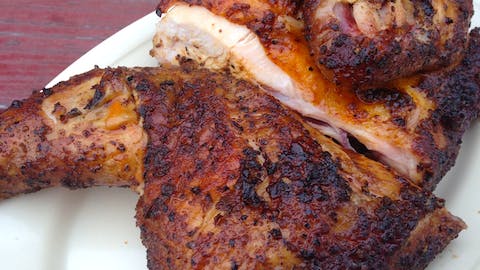 Joseph’s Riverport Barbecue in Jefferson – With the ribs and brisket being so popular here, It’s easy to forget about the chicken. Remember it, and you’ll be rewarded with some of East Texas’s best. 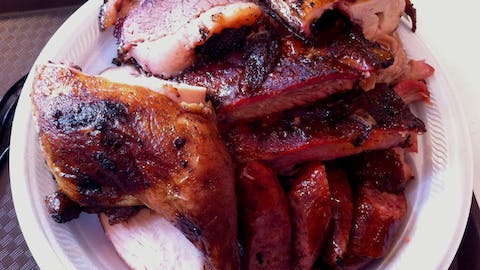 Micklethwait Craft Meats in Austin – There’s nothing complicated about this salt and pepper chicken. The smoke is well represented, and the generous black pepper creates little bursts of heat atop the taut skin. 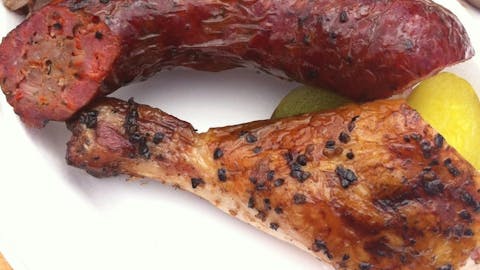 Pioneer BBQ in Nixon – The rub is heavy, and more involved than just salt and pepper, but the most impressive part is the crispy, burnished skin. Thankfully, the meat beneath doesn’t disappoint. 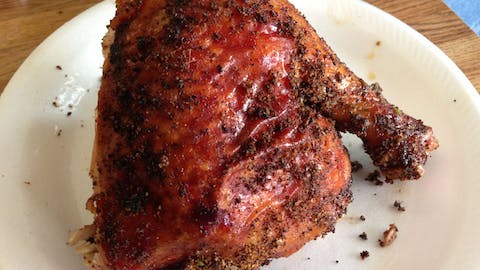 Rio Grande Grill in Harlingen – They cook a few batches of chicken throughout the day at this South Texas joint to make sure it’s always fresh. The skin can put up too much of a fight, but the meat is plenty juicy. 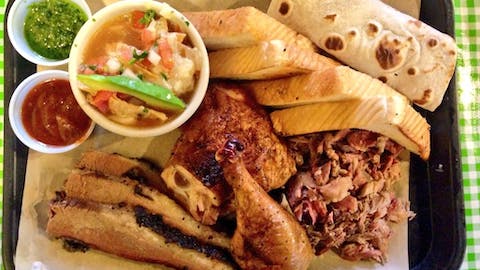 Roegels Barbecue Co. in Houston – Russell Roegels also offers a boneless, skinless chicken breast on the menu, so be sure to specify the real stuff when ordering. It’s a basic version, but good barbecue doesn’t need to be complicated. 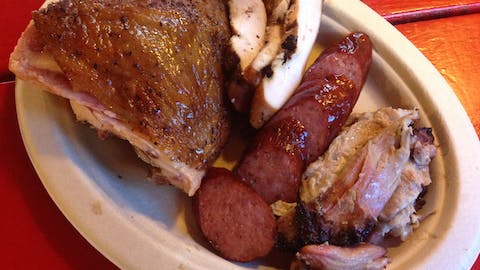 The Slow Bone in Dallas – I’m addicted to the fried chicken here, but the smoked version is no step down. It’s so juicy you’ll think it’s injected, but they just start with a good product and keep it that way. They’ll even throw the smoked version into the fryer if you ask nicely, but I’d just suggest a two meat plate with smoked AND fried chicken for the best of both worlds. 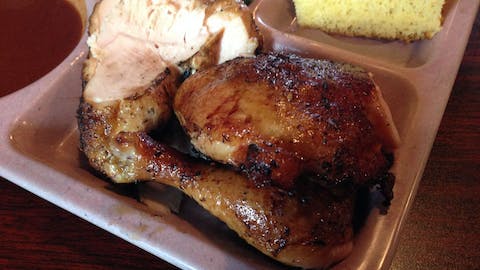 Smoke Shack BBQ in San Antonio – I got greedy for a bite before taking the photo. They brine the chickens here to help them stay moist, then add a dedicated poultry rub. Even the white meat was excellent. 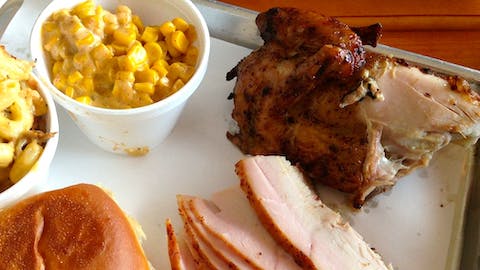 Snow’s BBQ in Lexington – Chicken halves over direct heat are one of Tootsie Tomanetz’s specialties. She flips them over oak coals just like the famous pork steaks. The skiing is kissed with fire and super crisp. Be warned, the chicken is one of the first items to be sold out on Saturday mornings at Snow’s. 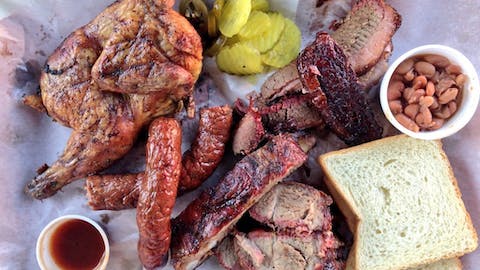 Southside Market & BBQ in Elgin – They’re famous for hot guts, but the chicken doused with some of the hot sauce on the table might be my favorite item on the menu. 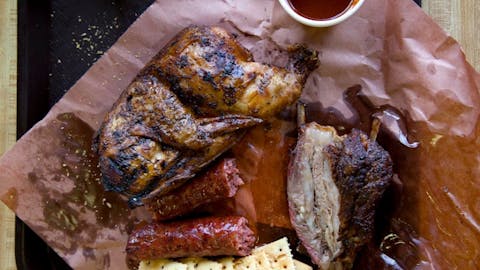 Stiles Switch BBQ & Brew in Austin – With so many other great smoked meats, it took me a while to discover this one. It’s ridiculously juicy with loads of flavor in every bite. 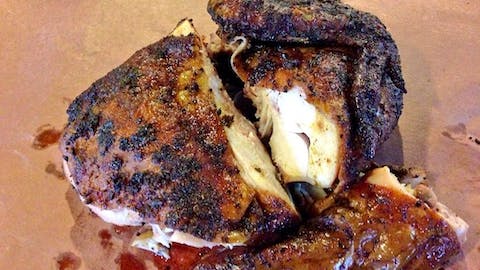 Ten 50 BBQ in Richardson – The chicken here is brined, which keeps it more moist than the turkey. It’s also good and salty with just enough smoke. 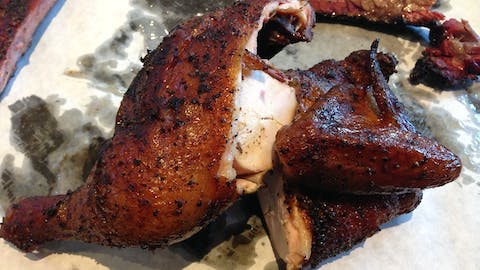 Zimmerhanzel’s BBQ in Smithville – The barely tanned skin won’t knock you out with smoke. It’s the salt and pepper that provides most of the flavor on the crisp skin. 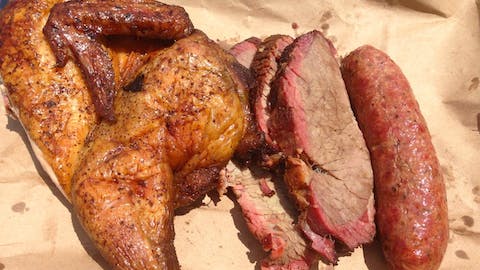 I’ve eaten a lot of smoked chicken, but I know I haven’t had them all. Let me know if I missed your favorite in the comments section.