I know we’re well into the last week of January, but this is my official first review of the New Year. I visited this joint when most others were closed on New Year’s day. It was nearly empty, so I had the place to myself, and I was free to snap away with the camera without anyone paying attention, or so I thought. Ordering here is done meat market style by asking for 1/4 pound of this, and few ribs here and there. This allowed me to sample a variety of meats, which is always my preference. Of course brisket and pork ribs made it on the red plastic tray as did sausage and their specialty cherry glazed baby back ribs. Based on staff recommendation, I got a side of hum drum mac & cheese, and the zesty vinegar slaw was gratis. 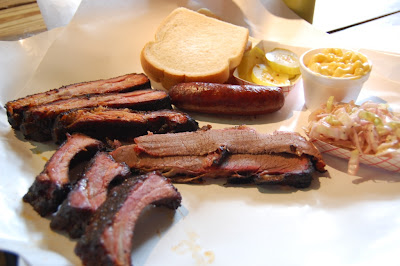 The brisket slices were perfect. Just the right amount of perfectly rendered fat was left on each slice. A deep smokiness found its way into the meat, and each slice was moist, tender and every bite made me crave another. The cherry glazed baby backs were surprisingly meaty and moist. The rub wasn’t overpoweringly sweet, an it worked well with the meat which was adequately smoky. The large pork ribs had too much rub to allow a nice bark to form. The meat had decent smokiness and good flavor, but it was a bit dry. Sausage was a good, if not remarkable version of a beef and pork mixture with good snap and decent flavor. 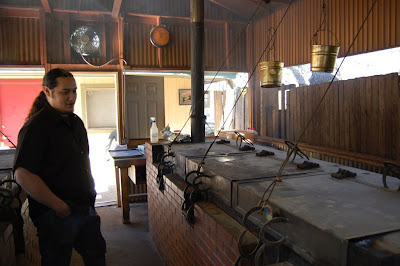 As I was snapping away with my Nikon, a guy walked by from the back door, and looked at me curiously. When I had finished he walked by again asking if I enjoyed the meal. I learned that he was the pit master here. Jason Dady may be the chef, but this is the guy (pictured above) who mans the fire. That fire is first started with lump charcoal, then post oak is used for the smoking process in these giant steel pits. After sampling their well smoked meats, I was surprised to learn that they’d been open for less than a year. Here’s hoping they stick around so I can go back and try the smoked shrimp.