Pork crown roast is a popular cut with an inferiority complex. It wants to be taken as seriously as prime rib, thought it would probably settle for the respect of rack of lamb. Alas, a bone-in loin of commodity hog isn’t much to look at, so butchers dress it up by making a meat wreath out of it, then topping that wreath with little paper hats. It’s cute, and the trussed-up porcine crown does make for a striking centerpiece. But this recipe is a defense of the ugly pork crown roast.

The first step in making an ugly pork crown roast is to skip the racks of Frenched pork loin. Frenching is a process where they clean the ends of the bones to make it looks presentable. I’ll just call it what it is—a waste of meat. Throwing away half a rack of baby back ribs just to fit little (inedible) paper hats onto the bones is ludicrous.

Instead, ask your butcher for a rack of bone-in pork loin that hasn’t yet been Frenched. I had nine bones in my most recent roast, which was plenty to wrap the meat into a circle. You can ask for a few more depending on the size of your crowd.

Going down this path does require some carving skills, as demonstrated in this video from the Black Belt Butcher. (Skip over the part from the 4:10 to the 6:15 mark where he shows you how to French the ribs.)

To guide to loin in the shape of a meat circle, you’ll have to cut into the bottom side of the loin, in between the rib bones (again, refer to the video above). This creates obvious sections that will make divvying up the roast easy enough, but it also makes for thin wedges of meat that will overcook while you’re waiting for the inner part of the roast to get up to temperature. That’s the price you pay for replicating headwear for your main course (for a simpler non-crown version, see this previous recipe).

After your creation of the meat crown is complete, season it liberally on all surfaces. I used a simple mix of half Kosher salt and half cracked black pepper. I re-purposed the turkey hanger in the Pit Barrel Cooker to hang the crown roast upside down in the cooker with the ribs toward the fire. I wanted to get those rib ends crispy. 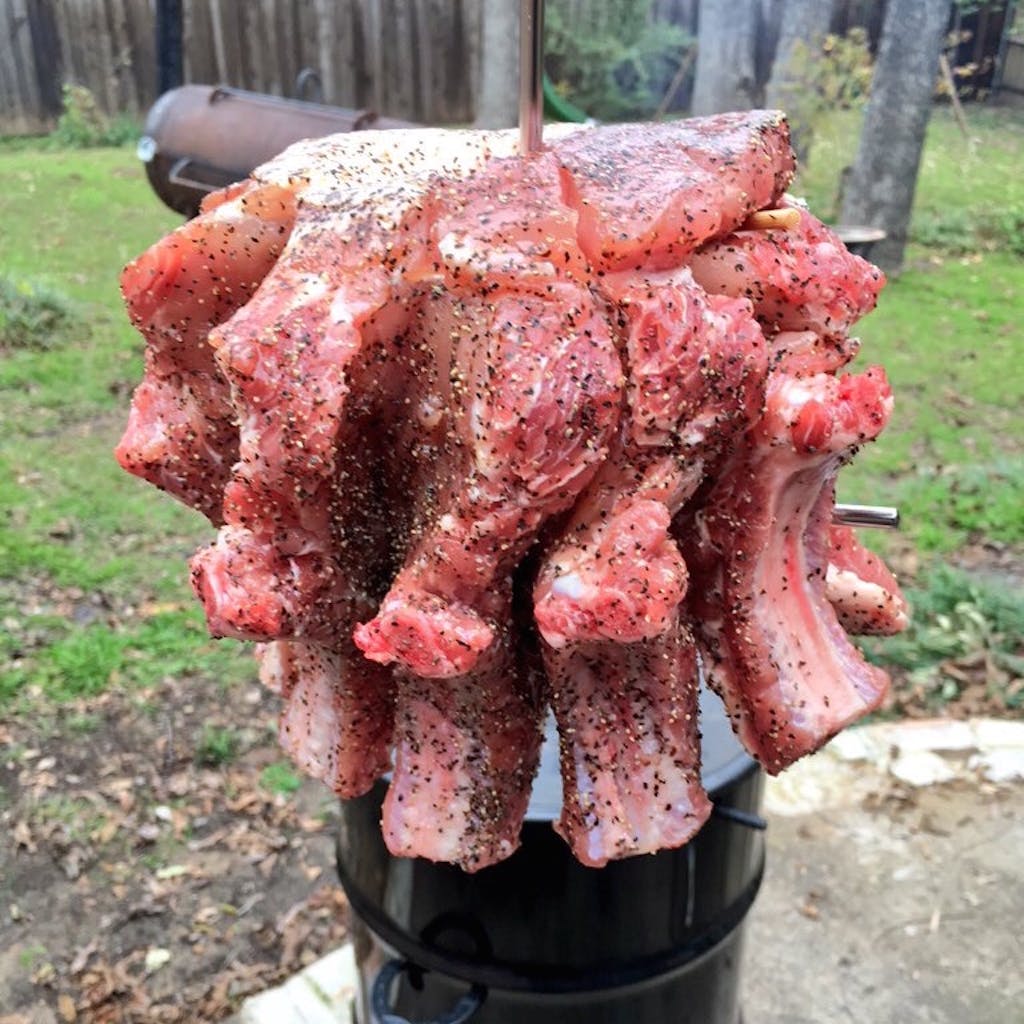 It was done in about two hours (a standard offset smoker should take no longer than three hours depending on your temperature), making this one of the quicker recipes at your disposal when you need to make an impression at the center of the table. 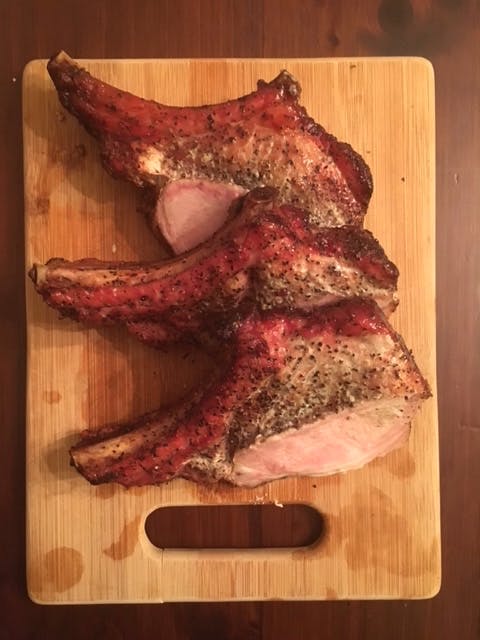 The roast came off the pit when the internal temperature had reached 140 degrees, and I let it rest for thirty minutes. Then it was time to carve. Despite the overcooked meat at the outer edges, it was still juicy. It was also better seasoned than a typical bone-in loin because of all that extra surface area created by the slices into the loin. Best of all, the ribs ends were at once crisp and tender. It was like a two-for-one cut with those ribs and the moist loin slices.

If you’re still skeptical about this cut, you might also want to consider the cost. I bought this one at a high end grocery store that charged $7.99-per-pound for bone-in loin. That’s quite a bit less than the $12.99 prime rib that was on sale, not to mention the much higher meat-to-bone ratio of the pork. But it’s more that just a good deal. A smoked pork crown roast is an impressive cut, and even tastier when it’s ugly.