When you ask people to name the five “tastes,” the average person typically has an easy enough time naming four: sweet, salty, sour, and bitter. It’s the fifth–umami–that’s a bit more elusive. The concept of umami has been around for more than a century, but it was largely unheard of until the Wall Street Journal dubbed it a “New Taste Sensation” in late 2007. Since then, ingredients identified as umami-rich–meaty-tasting foods like tomatoes, mushrooms, and parmesan cheese, and seasonings like Worcestershire sauce and fish sauce–have been the darling of chefs who want to amp up the flavor of pretty much anything ever since. But it’s monosodium glutamate, a.k.a. MSG, that is the most direct route to umami town. MSG is just a synthetic form of the same glutamates found in those umami-rich foods.

Jetton brushes on Kitchen Bouquet at the 1:25 mark

Glutamates are not a foreign ingredient in the barbecue world. The late Walter Jetton of Fort Worth was a purist’s purist when he cooked on open pits for LBJ. In a barbecue tutorial in the mid-sixties Jetton used only a coating of Kitchen Bouquet (an umami-rich reduction of vegetable stock) to season his barbecue. Famous South Carolina pitmaster Rodney Scott of Scott’s BBQ uses Accent (an MSG-containing flavor enhancer) as part of the seasoning mix for his whole hogs. That secret ingredient that you just couldn’t pick out in those Texas spare ribs you had last weekend might just be a sprinkling of MSG. If your favorite barbecue joint uses a commercially manufactured sausage there’s also a good chance you’re eating MSG. The original smoked sausage from both Hillshire Farm and Eckrich contains it, as do a few Texas smokehouses, like Holmes Smokehouse, V&V Sausage, and Chappell Hill among others.

While meat and MSG can make for happy companions, combinations of umami-rich ingredients are more often used to make vegetarian dishes taste more meaty, like the parmesan, anchovies, and Worcestershire in a Caesar salad. But I wanted to know what sort of effect a collection of umami ingredients–an umami bomb–would have on a simple pork butt. I realize this is Texas, where brisket is king, but I didn’t want to risk a failed experiment on a perfectly good brisket. If you’re interested, Harry Soo, of the very successful Slap Yo’ Daddy BBQ team, has used a similar rub on brisket with results he was happy with. 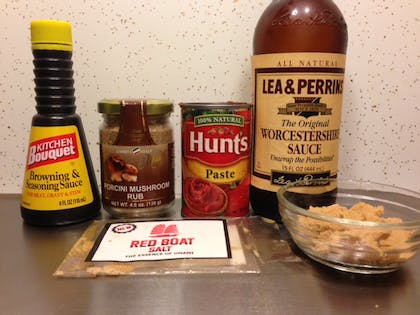 For my personal experiment, I smoked two similar-sized pork butts side by side. One was rubbed with a simple seasoning of black pepper, brown sugar, and salt; the other was a bit more involved. In place of a common yellow mustard bath (to allow the seasoning to stick), I created a slurry from mixed tomato paste, Worcestershire sauce, and Kitchen Bouquet. I coated one pork butt in the slurry, then sprinkled on a rub of salt, black pepper, dried porcini (mushroom) powder, fish sauce salt, and MSG.

If you’re tempted to brandish your culinary pitchforks at the idea of using synthetic MSG in cooking, or you think it is somehow unhealthy or routinely causes headaches, please watch this 23-minute defense of MSG and glutamates made at the 2012 MAD Symposium by chef David Chang before commenting. He starts off by stating “I can think of no other food ingredient or additive, at least in the Western culture, that is vilified … as much as monosodium glutamate.” Then Chang proceeds to tell the audience all the ways in which they’ve been enjoying glutamates for their entire life.

Others are less than impressed at the idea of mainlining umami into a perfectly good pork butt. When I told my friend and fellow barbecue fiend Nick Solares about the umami-bomb experiment, he replied dryly that it was “a solution looking for a problem.” He at least he surrendered that “these things are necessary to prove the perfection of barbecue as it exists already.” Proving his hypothesis would require just about ten hours of oak and pecan smoke. 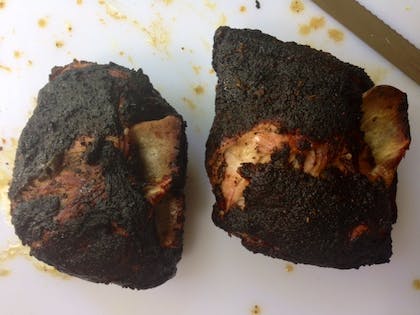 When they came off the smoker, there wasn’t much of a difference in appearance between the two pork butts. Both had a well developed black bark and a protruding blade bone. But how did they taste? Pretty much the same, thus giving Nick Solares a comfortable sense of validation.

The savoriness of the meat may have been amplified more if I’d added some MSG into the sauce, or sprinkled it directly onto the pulled pork just before serving a la Scott’s BBQ, but simply bathing a large chunk of meat with glutamates before smoking is a waste of dried porcinis. But it wasn’t a waste of time. Both the umami-bomb pork butt and the conventional one were damn good, so at least now I know that the perfection of barbecue already exists, and it doesn’t really need MSG.

*The nasty stories you’ve heard about the evils of MSG are likely nothing more than myths.