Van’s sits all alone along a long stretch of interstate between Corpus Christi and San Antonio. I had high hopes for this joint given the praise received from Texas Monthly in their 2008 Top 50 BBQ list, but little that they served on this day was worth returning for. 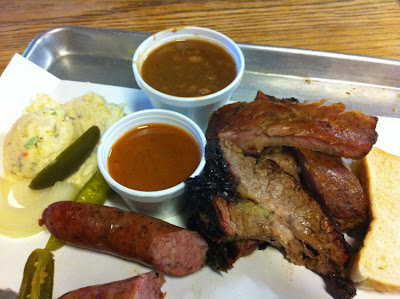 Pork ribs had no bark, little seasoning, and not much smoke. Although it came off the bone nicely, the meat tasted fatigued. A nice link of Pollock’s sausage was barely warmed with no smoke and a limp casing. Brisket looked good, but the black crust was limp. The meat tasted as if it was sitting around in its own grease for most of the day. The fat was poorly rendered and even stringy. Not even the excellent sweet and spicy mustard and tomato sauce could save it. Homemade pecan pie was also on the menu, but it was melting from too much time in the microwave. A spoon would have been needed to scoop it up, but we’d had enough.