Update: This joint had a fire on 03/11/11, but they have reopened and are back in business.

BBQ Snob: “Who is your hot link supplier?”
Virgie: “That’s my secret. Are you folks food critics or something?”
BBQ Snob: “That’s our secret.”

This is how my experience at Virgie’s began with the amiable proprietor and pit master, Adrian Handsborough. Pierson’s down the road has a big fan in Robb Walsh, while Virgie’s counts the Houston Chronicle’s Alison Cook as a fan along with being named one of Texas’s top 50 BBQ joints by Texas Monthly. These are some high accolades for being open a mere five years, but Chris Reid, Fulmer and I were about to find out if they were deserved. 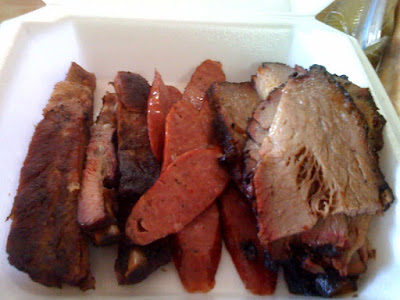 Virgie’s offers a meaty sampler plate, so we went without sides, and headed straight for the protein. Those mysterious hot links were dense and flavorful. A mild red pepper heat was complemented by cracked black pepper and plenty of post oak smoke. They were moist without being fatty and there was a great snap to the casing. St. Louis ribs were a bit on the small side and could have been a bit more meaty, but they remained moist and tender with a nice chew. Well seasoned, they had a bold smokiness and excellent overall flavor. Portions of the point and flat were held together tenuously by a thin line of scrumptious fat in each of the thick slices of brisket. A beautiful rosy smokering was enveloped by a deep black crust, and the flavor of that oak smoke made it deep into every bite. A large portion of fat remained on many of the slices, but was so well smoked that it was devoured along with the meat. At the end of the meal, this would be the cleanest box on the trip.

While all of the offerings were stellar, my favorite part was the brisket, and it’s quality was further cemented after the BBQ Smackdown where I chose Virgie’s as my favorite sample. My favorite bit from the joint’s website may be a misprint. Adrian describes the history of the joint and his “barbecure.” Joints like this definitely help me recharge after many medicore meals in a row, and I’ll be lobbying Webster to add this term to describe how sometimes good BBQ is all you need to cure what ails you.