“There is no one definitive way to make Memphis barbecue.” So says Craig David Meek, author of Memphis Barbecue: A Succulent History of Smoke, Sauce & Soul. After a four day tour through the River City, I must agree with him.

Those who have tasted the various iterations of Texas barbecue know how naive it is to make sweeping generalizations about this cuisine, as the styles vary significantly across the state. Memphis-style barbecue is just the same, even though its geographic boundaries are primarily limited to the city limits and its immediate surroundings. There are big differences in what you can expect from one barbecue joint to the next, even if they’re just a mile apart. And a lot of that has to do with one element: the rub. To be clear, in Memphis, the dry rub is applied after the pork ribs are smoked. The meat is either slathered with a sauce or sprinkled (quite liberally) with a spice mix. (For something similar in Texas you’d have to go to BBQ on the Brazos in Cresson where a light sprinkling of a dry spice rub is the final flourish before serving.) But yes, the choice between these two options has created a classic Memphis conundrum: “wet or dry?” Plenty of joints make the choice for you, like Rendezvous, which doesn’t offer a wet rib, or Showboat, where a dry rub is nowhere to be found.

In his book, Meek estimates that there are hundreds of barbecue options in the Memphis area. I couldn’t try them all, but I created a list using some of personal favorites, plus suggestions from local barbecue competitor and writer Clint Cantwell. All of those from Meek’s guided tour are included as well. While I generally prefer my barbecue with sauce on the side, I went with the local custom of saucy ribs wherever they were offered. Here are the wet, the dry, the hot and fast, the low and slow, and the good and the bad. 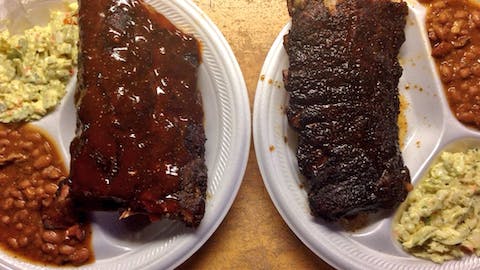 In a bar that’s more famous for its boisterous late night crowd and the Greek burger, the ribs might get overlooked. They shouldn’t. Owner Rocky Kasaftes runs this sixty-plus-year-old tavern, but he’s been cooking ribs for less than a decade. Each rack gets a coating of seasoned pepper and Greek seasoning before going into a small offset smoker that sits next to the back door. Once the ribs are done, they get dipped into a vat of Wicker’s marinade and Lea & Perrins Worcestershire sauce just before serving, so even the dry ribs are wet.

These are some of  the last ribs I sampled in the city, and after so many herb and paprika heavy rubs, this Texan found the generous black pepper to be a welcome change of pace. Alex’s was a great barbecue find, and maybe next time I’ll have room for the burger. 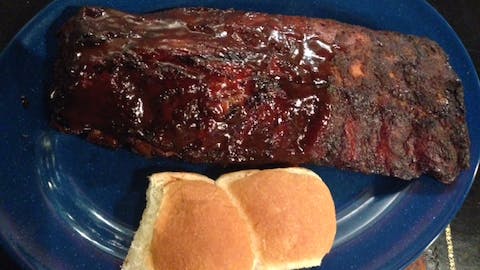 The new downtown location of Central BBQ has a more polished look than the cozy original, but it comes without the long lines. They’re happy to provide a full rack, straight off their Old Hickory rotisserie smoker, that is half wet and half dry. The wet side gets a thin glaze of sweet sauce that clings nicely to the warm surface of the ribs. A light sprinkling of dry rub seemed to disappear almost entirely, but both sides of the rack were equally good. The ribs exhibited a superb texture, but they didn’t have much smoke flavor. Even without the heavy smoke, it’s still one of the few racks where I enjoyed both sides. 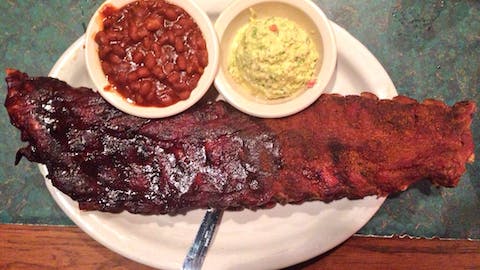 Owner Dan Brown has run Leonard’s since he purchased it in 1993, but he worked there long before that. He still remembers when they slow-cooked ribs in deep pans in the oven, but in the sixties they started cooking over charcoal exclusively. A brick pit inside the kitchen is loaded with charcoal and ribs every day because Brown doesn’t believe in serving leftovers.

Wet or dry, it didn’t matter. These were the best ribs I had in Memphis. Even under the brushed-on sauce, the outer bark on the ribs was crisp, and the smokiness from the charcoal was prominent. The first bite from the dry rub side reminded me why Memphis is considered a great barbecue destination. It had a little spice without the loads of sugar that have ruined many other Memphis dry rub. Rather than covering up the pork flavor, the rub helped enhance what was already an exemplary rack of ribs. Whether for the history or just the food, this is barbecue worth traveling for. 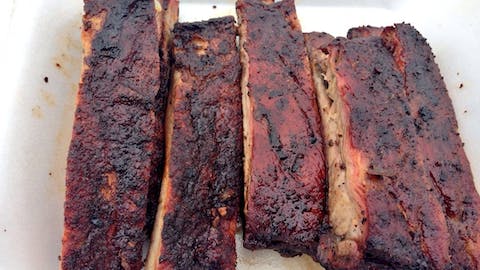 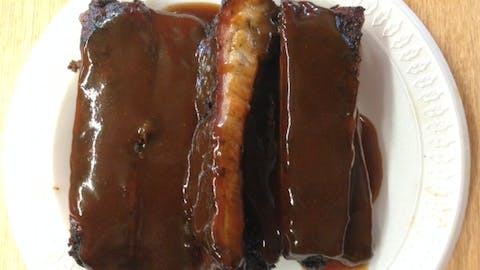 Immediately after ordering ribs (or just about anything else on the menu) you will be asked “Hot or mild sauce?” Don’t flinch or second guess. Set yourself up for a good meal by saying “neither.” The barbecue sauce here is thick, sweet, and with plenty of liquid smoke. It obliterates anything it touches. The dry (not dry rub) ribs, cooked over charcoal in a Chicago style aquarium, were the clear favorite. There’s a pleasant char on the bark, and that charcoal flavor hangs on between bites (and a while afterwards too). You’ll need a bit of a tug to get the meat off the bones, but it’ll be worth it. Get one of their famous Cornish hens alongside. 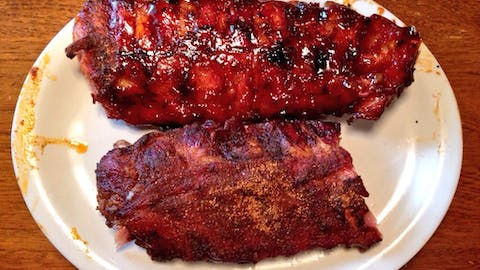 The most impressive moment during my trip occurred at Memphis Barbecue Co., where owner Melissa Cookston serves a complimentary basket of pork cracklin’s. The ribs were plenty filling too, but in the wet/dry debate, just skip the dry rub here. Turbinado sugar and salt are the only prominent ingredients, so each bite of pork comes with about a teaspoon of sugar. The sticky, glazed wet ribs were far better. Not much of the pecan smoke could be detected beneath the sweet sauce, but every rib was juicy and tender. 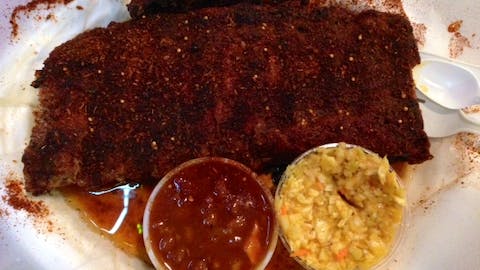 In a 2002 interview with the Southern Foodways Alliance, John Vergos of Rendezvous said, “We don’t cook slow. We want to cook our ribs in an hour and fifteen minutes.” They introduced ribs to Memphis in the mid-fifties that were cooked directly over charcoal, and the Vergos’s haven’t looked back. Every rack of baby backs is served with a pool of vinegar on the plate below, and a hillock of dry rub over top the meat. They don’t serve a wet rack (there is sauce on the table), and didn’t even have sauce until the mid-eighties. Ironically, these hot and fast grilled ribs without sauce wouldn’t meet many folks definition of Memphis style, yet they were probably the first place cooking ribs in town.

Rendezvous is highly celebrated, but it also has plenty of detractors from the barbecue community who say it’s no good anymore. They also complain that it’s too big (the place is sprawling), and that the ribs are too tough. Well, they’re tough because they’re grilled unseasoned for only a short while. If you like a sweet, tender rib, then this isn’t your place. However, for what they do, and have been doing for decades, it’s done well. Just be sure to sneak in a rack of lamb ribs too. 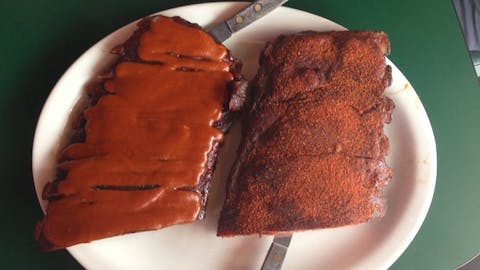 Wet, dry, and glazed are options on the menu for these St. Louis cut ribs. I had already tried the glazed on a visit several years back, and it tasted like salty cake frosting. The wet version wasn’t much better. Instead of brushing sauce a hot rack of ribs, the half rack was just slathered beyond recognition. A nice level of smokiness in the meat made for a good counterpoint to the sweet, dry rub. The rack was a bit dry and also lukewarm, but it still one of the better options in town. Just steer clear of two out of three options to eat your ribs. 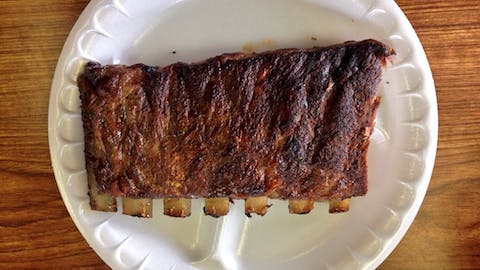 They don’t offer them wet, nor do they have a dry rub at Three Little Pigs. They might not even have ribs at all when you visit. You’ll have to look for a “Ribs Today” sign displayed somewhere near the cash register. The meat was overly tender,  but the flavor was good. They don’t hit the level of my favorites in Texas, but they tasted more like a simply rubbed and smoked Texas rib than the others I tried in Memphis. 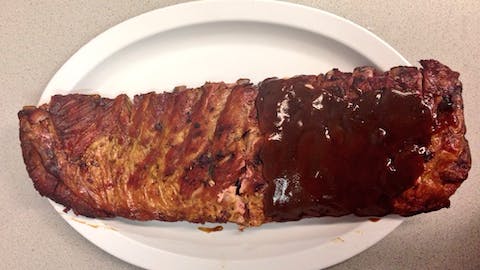 These big spare ribs cooked over charcoal needed a little oomph. Seasoning on the meat was limited to salt. The flavor was flat, and the meat just wasn’t tender. A dry rub wasn’t an option, and a thick slathering of overly sweet barbecue sauce was the only way to kick them up a bit. The pork sandwich is a better option. 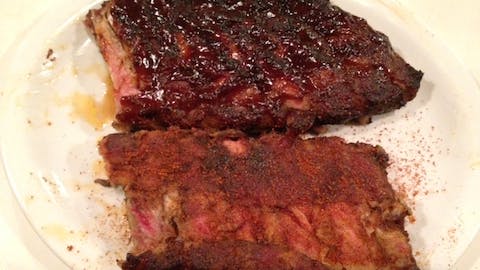 With the sign “Voted #1 Ribs in Memphis” and the location on tourist-heavy Beale Street, I went in with a healthy level of skepticism. When I asked for dry ribs, the server hinted that the request was abnormal, but they had a shaker of rub on the table if I so desired. It didn’t really matter how they were flavored, because the meat fell away from the bone like a roast, and the flavor was of yesterday’s pork. 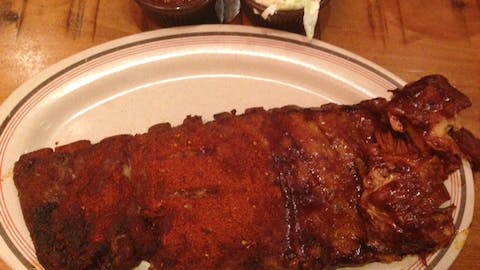 When the plate arrived, the rack of ribs looked like it had gone through barbecue triage. There were parts falling off every which way because the ribs were so far beyond overcooked. The meat was mushy with hardly a whisper of smoke. No sauce or dry rub was going to resuscitate them. 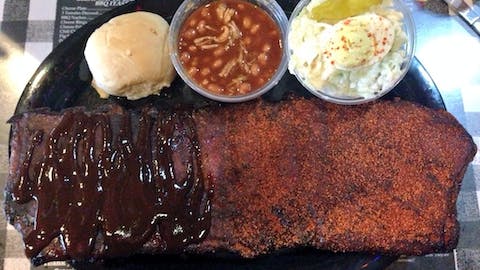 There was nothing technically wrong with these ribs, they were just bland. If you want sauce or dry rub you apply it yourself at the table. The ribs arrived barely warm after a light brush of sauce, so a large amount of the rub that I shook on generously, slid off every time I picked up a bone. What remained tasted mainly of sugar. The thick, sweet, molasses sauce on the other side hid any of the already muted flavors. 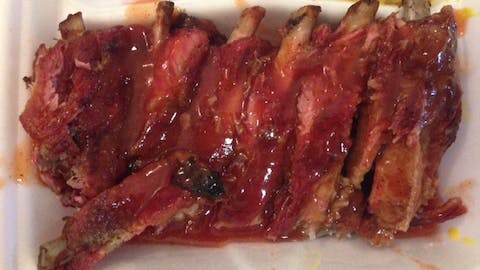 This joint is famous for its pork sandwich and bright yellow slaw, but I was here for ribs. They’re served in a closed styrofoam box for every order, so I sat down and opened my lunch. A wave of vinegar odor hit me, but the flavor was equal parts of acid and syrupy sweetness. It helped to moisten the dry and overcooked ribs, but is that really a virtue? 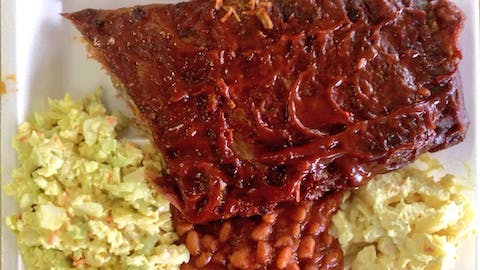 Showboat doesn’t have a dry rub, and when they sauce their ribs, it’s done with mop. Some refer to this as a “muddy” rib, and that would also describe the flavor. The pork tasted steamed, and the sauce was very tomato-forward, closer to ketchup. It also didn’t benefit from being the stop directly after Leonard’s which was a favorite. 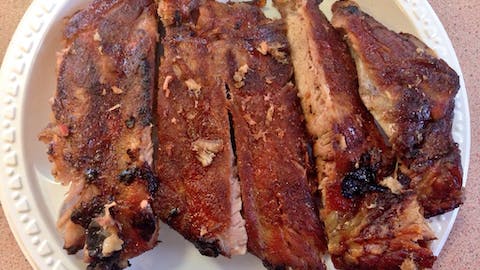 I won’t get into much detail of the very dry ribs at Top’s, but I will say that there’s no need to bother with them. Order a double cheeseburger all the way with a third pound of chopped pork and barbecue sauce ladled on. It’ll make you forget about the ribs, or at least it worked for me.

I likely missed some of the city’s favorite ribs, but I planned carefully to ensure a wide-ranging collection of top quality barbecue joints in Memphis. For a city that is literally world-renowned for barbecue and for ribs, I didn’t expect so many duds. I guess great barbecue is the exception no matter where you travel, but I’m definitely happy to be back in Texas.