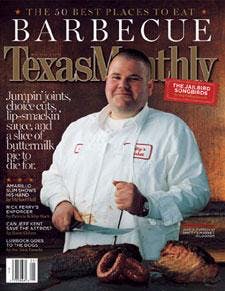 Spenser Magazine just published a story about the Kreuz and Smitty’s barbecue feud in Lockhart. The story outlined how the two sides of the family came together to create Schmidt Family Barbecue in Bee Cave. It was a great piece, but the companion blog post that just posted today might be more interesting. After interviewing many in the family, writer Mike Dundas learned about a few changes at both Smitty’s and Schmidt Family Barbecue that have gone a bit under the radar.

John Fullilove has been the pitmaster at Smitty’s since they opened in 1999. He graced the cover of Texas Monthly’s Top 50 BBQ list in 2003 when Smitty’s was in the top five in the state. I had some great meals at Smitty’s including one last April when I was doing book research, but things have changed at Smitty’s. We were less than impressed over several visits when determining the Top 50 BBQ joints in Texas. Also, whenever I see that a group of barbecue travelers has made their rounds to all the Texas greats, I ask them for their top pick and the bottom. The top varies, but over the last year Smitty’s has been the consistent choice for the bottom. The key here likely lies with (or without) John Fullilove. Dundas writes “Over the past year, according to Nina, John has been taking time off from the pits and James Fullilove (John’s brother) has come back to his hometown of Lockhart to be the new manager.” Losing one member of a team doesn’t always spell doom, but this revelation could certainly account for some of the slip in quality we’ve seen at Smitty’s.

But where is John Fullilove? He’s been working with his cousin Susie Schmidt-Franks to open Schmidt Family Barbecue in Bee Cave. When the joint was announced the plan was to have Susie’s husband Chad Franks do all the cooking. That may be the case in the long run, but it looks like John Fullilove may be the opening day pitmaster at Schmidt Family Barbecue when they open later this year. John is mum on the prospect, but Kreuz Market owner Keith Schmidt said in the Spenser blog post that “Chad came here (to Kreuz) for about six months to learn from Roy, but it is also pretty likely that John is going to be working the pits [at Schmidt Family Barbecue].” The bad news is that John Fullilove’s departure from Smitty’s may have been a major contributing factor in the decline of their food. If that’s the case, then we have something to look forward when he gets back into the game later this year.