De’Andre Jackson never thought he’d be cooking barbecue for a living. As a football star out of Garland, he started for the Big 12’s Iowa State. Entering his senior year, some had him graded as the third best cornerback in college. An ACL-tear toward the end of the season kept him from being drafted, and his NFL dreams were over before they could really get started. After a year in the CFL, he decided finishing his degree was more important. Then he came home.

Jackson’s family members have always been barbecue cooks. Along with his dad and brother, De’Andre was part of the team that opened III Fellas BBQ in Garland last year. In July, he and his wife Maegan decided to branch out on their own and took over what used to be a Mexican restaurant in Plano, just east of downtown.

The space in a work in progress. An unfinished bar sits to one side, and a banner almost covers the holes where T.V.’s once hung on the walls. It has the endearing look of a joint that opened with a lot of heart and hope instead of big-money investors.

All the orders are prepared in the kitchen so there’s no preview. A small counter-height opening is the only window into the kitchen, and through it you’ll see hands working a knife and get a peek at an array of meats on the cutting block. On my first visit, I carried my to-go boxes to a back table hoping for the best. The brisket inside had an ink-black crust with a thick line of tough, unrendered fat. The meat was juicy with a bold flavor from the salty rub, but too tough to pull apart easily. It was brisket with solid potential that simply needed more time in the smoker. I had to come back the next day to see if they could do better.

This time, I got my meal on a tray where a generous serving of thick-sliced lean brisket looked more promising. I pulled away chunk after chunk of the savory beef, and relished the tender fat. It was still hot to the touch, and could use a longer resting period so as to remain juicy throughout the meal, but this was some solidly good brisket. It was even better chopped on a sandwich, where even the bun was seasoned with rub.

Jackson isn’t afraid of flavor, as he shows in the heavy rub on the ribs. He uses baby backs, and coats them with a mix of salt, pepper, sugar, garlic, red pepper, and herbs. I even got a bite of caraway seed. It’s a heavy dose of seasoning that verges on palate assault, but I kept going back for more. They didn’t have the smokiness of the brisket, but did share some of the doneness issues. They were pleasantly chewy on the first visit, but I got a few huge baby backs the second time around that were simply pulled off too early.

A lack of consistency here wasn’t a big surprise. There isn’t much of a staff. A friendly woman works the register. Jackson had one other helper in the kitchen. He’s the owner and pitmaster, but stayed busy as the food runner for the whole dining room during lunch.

He’s also had some issues with his turkey leg supply, so it wasn’t available during either visit, but for just $8 you can get a turkey leg sandwich, which is comically a whole turkey leg and two pieces of bread. I did get to try the chicken, which might be their best item. The dark meat was dripping with juiciness. The crisp skin had a more subdued seasoning, while also bringing the smoke. Here’s hoping the turkey leg is that good on my next trip. 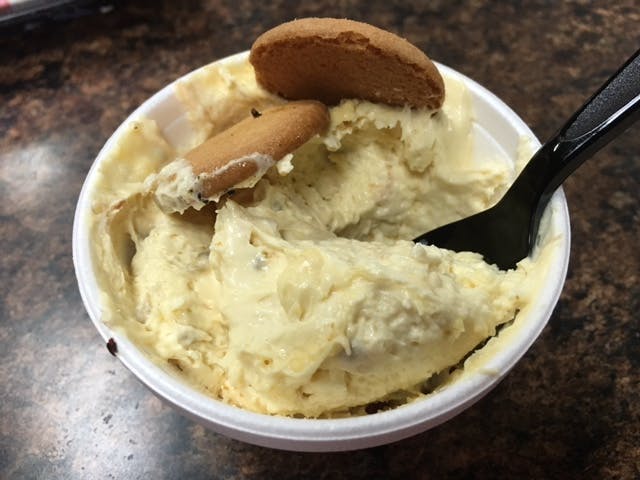 The lone dessert option, unless you count the super-sweet baked beans, is a banana pudding so thick it could almost be frosting. I still liked it. Sides are all homemade. The mac & cheese is a classic version with the zing of Velveeta, while the potato salad – their best side – is chunky with plenty of mustard.

They also know how to bake a potato. The MVP is one of them stuffed with up to three meats. It’s easily enough for two, so the $14 price tag is a bargain. I went with chopped brisket, a well-made pulled pork, and hot links which come from Smokey Denmark. It was great, but I made all these choices before I knew ribs were an option, or that you could ask them to build a Frito pie inside the potato.

If you’ve found yourself complaining that barbecue is getting too popular or too fancy, or that it’s somehow veering away from its roots, Winners BBQ is your antidote. They’ve got a few easy things to fix, but Jackson has built a solid foundation on good barbecue and plenty of flavor. That makes Winners BBQ worth a visit now, and my guess is that it’s only going to get better.