Where’s the beef, or more specifically brisket? Just a few days ago chef and owner Tim Love bragged via Twitter that a record number of animals were cooking at his popular Woodshed Smokehouse, but this might be the only smokehouse in Texas whose smoker hasn’t seen a brisket (unless there was a daily special out there that I missed). Always a savvy businessman, Mr. Love has made a wise decision. Tim knows that if he offered brisket on the menu of his Texas Smokehouse that he would be ultimately judged by the success of this unforgiving cut. Instead we’re all talking about ribs and cauliflower, which are all done well, but don’t provide the challenge of a beef brisket. 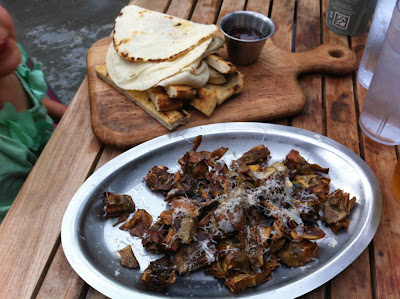 Once I got over the brisket issue, we ordered some appetizers. Smoked artichokes were both crisp and juicy. Sprinkled with parmesan and drizzled with oil, they were hard to put down and we cleared the pate pretty quickly. Another hit at the table (at least for my daughter and I) was the camp bread with pitmaster fat. A ramekin for dipping was full of hot rendered fat whose flavor was heavy with lamb. It was better than any dipping sauce I can remember and the thick camp bread was soft but still offered some pleasant chew. 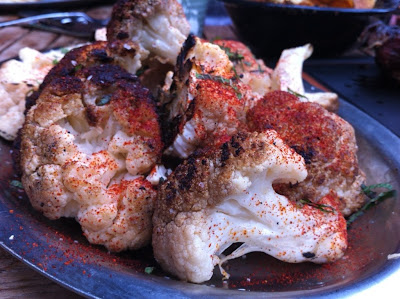 A whole head cauliflower was smoked over oak (all of the menu items have a symbol next to them which designates which of four woods are used in the smoker or grill). I like vegetables just fine and one of the better veggie items I’ve ever eaten was a whole head of cauliflower done in my oven from a Michael Ruhlman recipe. That version was buttery and tender, but the Woodshed’s head was drier and even a bit crisp from being a bit undercooked. The smokiness was aggressive along with the spices, but it hadn’t yet reached its potential on this visit. 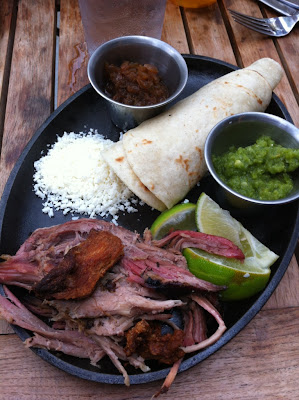 A different whole animal is featured every day. On this visit it was a whole hog roasted on a spit in full view through a large window between the waiting area and the kitchen. My young daughter was captivated by the spinning porker while we waited for our table, and strongly suggested we order it when we got to the table. Chunks of moist and highly seasoned pork were pulled from the hog and served with all the fixin’s for tacos. The pork was so good none of my portion made it onto a tortilla before I finished it off. 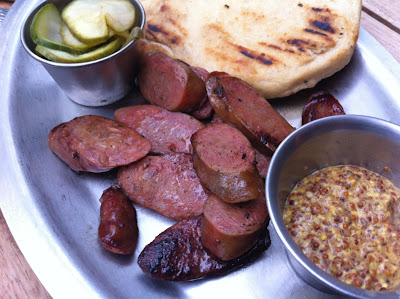 Like the animal of the day, the sausage also rotates. A full grain mustard with serious kick were served with a bison sausage and some house made pickles on the side. The meat had great smoke and spice, but bison can dry out easily due it’s low fat content, and these links exhibited the issue. 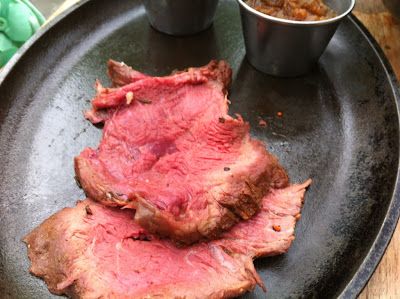 Smoked tenderloin is listed under “Traditional Q” on the menu at $2.50 an ounce. Other items have a price listed per pound, but I guess $40/pound was harder on the eyes when the menu was being edited (although they do let you order as little as 2 ounces). It was the least successful meat we had. Served cold and rare, the underseasoned beef had picked up little smoke. I was wishing they’d just seared the meat. 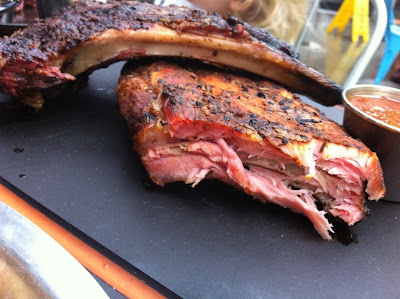 Beef back ribs are rarely done well, but what they’re putting out here can be held as an example of how well they can be smoked. A crust was crisp with the meat between the bones (there’s very little over the bones, which is normal for beef back ribs) remaining moist. Even coverage of a flavorful rub allowed for a good crust and a nice smokiness. Pork ribs were almost as good and a bit meatier. The pork came off the bones easily enough and again the crispiness of the surface was a nice textural change. The seasoning seemed more herbaceous and heavy-handed than with the beef ribs. After all the meat, we finished with two slices of pie. The marshmallow covered chocolate pie was decadent and rich while a buttermilk pie had an addictive hint of lemon. I’d gladly visit again just for the pies which come from Fort Worth’s Black Rooster Bakery. 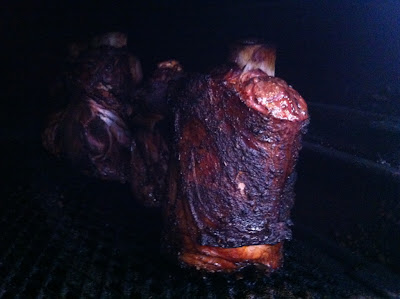 After all that food I couldn’t convince the family to try the $75 beef shin, but a tour of the pit room allowed me to catch a peek of one in progress. There seemed to be enough spare room in there for a few briskets. Stacks of wood are piled against several smokers in the screened-in room, and I learned that the various woods on the menu is not a gimmick. Each smoker has a specific wood written on the side and are only fueled with that wood. A hispanic man whose name I didn’t catch was tending the pits and was happy to show off the next day’s special of quartered cabrito that was getting a nice smoky crust. 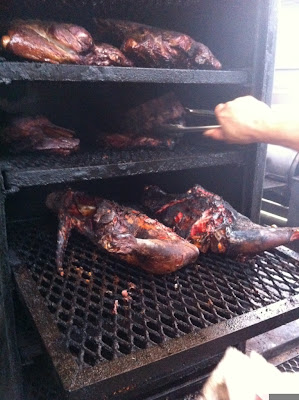 Minus the lack of brisket, I really liked this place. The nouveau barbecue might be hard for some purists to warm too, but this is well executed food that is more accessible than you might expect from the long menu. As a Dallasite, I’d gladly make the forty-five minute trip from Dallas to Fort Worth and eat here again, and I’d tell any of my cohorts in Dallas to do the same, so the only rating that makes sense is…