Woodshed Smokehouse is a reflection of its owner and chef Tim Love. He’s an ambitious chef with several restaurants and a face made for television. He is a busy man with many talents and the menu at Woodshed Smokehouse is as busy. There are many genres of food to cover, but I was there for barbecue. Until recently the barbecue menu had a large hole in its repertoire. Brisket was missing. Now that they’ve remedied that glaring exclusion from their menu I decided to come back to the Woodshed for another visit. This time I could get the Texas Trinity of brisket, pork ribs, and sausage. 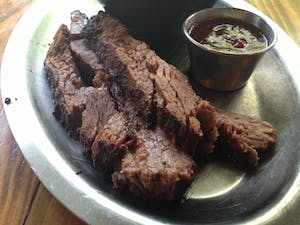 Most of the menu items are smoked, but four different woods are used in four different smokers in the smoker room. There is a wood legend on the menu letting you know which wood is used for each of the menu items. The ribs are smoked with pecan wood while the brisket and sausage are smoked with hickory. The hickory smoked brisket can be ordered by the quarter pound. At five dollars per portion (twenty dollars per pound) this might be the most expensive brisket in Texas. I asked the server if I could get a quarter pound of lean brisket and a quarter pound of fatty brisket. His response was “We just serve sliced brisket”. I think the question was beyond him, but it’s hard to blame a guy who’s only seen brisket on the menu for a couple months. What I got were two big slices from the fatty end that in all fairness was more than a quarter pound. There was not much of a developed bark and no smoke ring to be seen but the meat did look juicy. It was overcooked and fell apart so I tried to pick it up. Thankfully it hadn’t been dried out and the seasoning went deep into the meat. A bite from the crust provided a thin line of fat and the whole a lot of salt. I needed to sip from my pint of one of their many fine craft beers on tap to adequately wash it down. All in all I much prefer overcooked and over seasoned brisket to undercooked brisket that is tough. Chef Love was on the premises and I asked about brisket and whether he had wrapped it. He said it stays unwrapped throughout the cooking process so I’m not quite sure how it gets so little smoke while getting so over tender. Maybe it’s something in the holding process. Chef Love did lament the challenge of providing fresh smoked meats for lunch and for dinner service. It’s a challenging thing indeed. 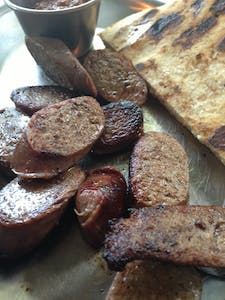 The menu has been massage beyond just the addition of brisket. Pork baby back ribs that used to be available by the rib are now only available by the fourteen half rack or a twenty-eight dollar full rack. There are rotating items on the menu like an animal of the day and a sausage of the day. This day’s sausage was a duck and cherry sausage. I’m an open-minded guy when it comes to feelings of a good sausage but these weren’t easily confused with central Texas hot guts. Instead of being warmed or smoked and served as a full link the duck sausage was sliced on a bias and warmed on a flat top. It was then served on a warm plate with flatbread and mustard. The sausage had a fine grind without a great deal of smokiness but the casing was well cooked and the filling was very rich in a good way. Like many things on the menu it was very salty but the punch of the mustard certainly offset that. The ribs on this visit thankfully did not suffer from the normal over seasoning that I have seen in the past. On previous visits there was as much rosemary on the ribs as you’d find in brunch potatoes. This time the seasonings were more subtle this time allowing a nice crust to form and a good smokiness to develop. The half rack of ribs here is served whole and I was pleased that the meat kept its integrity when cutting in between each bone. While the ribs were adequately tender they were thankfully not falling off the bone. 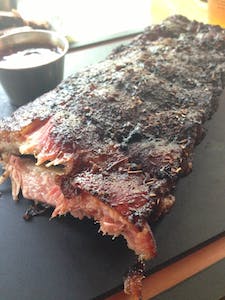 The side items get a little wild here real fast. I enjoyed the smoked cauliflower on previous visits but this time I went for the most normal item I could find. Potato salad. It looked like it had been through a ricer so it wasn’t quite mashed and barely held together with a minimal amount of dressing. After a couple bites, it was time for dessert. The buttermilk pie and chocolate marshmallow pie that I had enjoyed on both of my previous visits was no longer on the menu. Fort Worth’s Black Rooster bakery has been relieved of their duties and the Woodshed kitchen now prepares all desserts in house. A smoked chocolate meringue pie was a solid stand-in with definite smoky notes and lots of little pockets of surprising salt. A coconut pie suffering from severe refrigerator fatigue was not as successful. 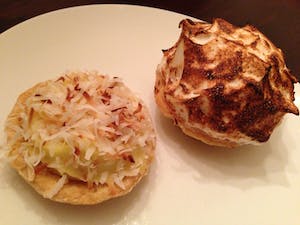 On my way out I talked to Chef Love who had been chatting with the party next to me at a communal table in the bar area. When I noted the saltiness of the brisket he said they prefer things a little saltier. He then asked if I had their famous beef shin. It’s an eighty-five dollar monstrosity to be shared with at least four people. I’ve coveted it more than once, but lacked similarly inspired table mates. Not everything I had on this visit was a homerun, but I’d be glad to bring back three friends and give that beef shin our best shot.