Customers love beef ribs. When a pitmaster plunks down a big, thick fatty rib on a plate, cameras are whipped out to document this ultimate carnivore trophy that is the succulent symbol of the Texas obsession with beef.

While beef backs ribs have been found in joints from Fort Worth to El Paso for decades, beef short ribs have historically been served at very few barbecue joints in Texas. The short rib’s history as a popular cut to order is typically traced back to Louie Mueller Barbecue and the famous beef short ribs featured on its menu daily. Louie Mueller, along a small group of joints in Central Texas, like Black’s Barbecue in Lockhart and the Cooper’s chain that originated in Llano, were really the only ones serving up this cut. That is, until a  few years ago, when the beef short rib phenomenon took hold of the barbecue world. From South Texas (the Granary in San Antonio now cures them and makes bright pink pastrami beef ribs) to East Texas (Stanley’s Famous Pit Bar-B-Q in Tyler serves them), they’ve become a very popular menu item and have won over the customers.

But the dirty little secret behind short ribs is that the pitmasters kind of hate them.

The beef short rib is a unique menu item. A single rib (which is how it’s usually ordered and served) can be as large as two pounds post-cooked weight. It is also delicious. Unlike a brisket where there’s a distinct fatty side and a lean side, the fat and collagen in a beef short rib runs evenly throughout the meat, producing that juicy, silken, slightly gelatinous texture. They’re less finicky in the smoker than a brisket is, but finding that right point of tenderness still requires plenty of patience. It also requires a lot of room on the smoker, valuable real estate that has a real monetary cost associated with it. 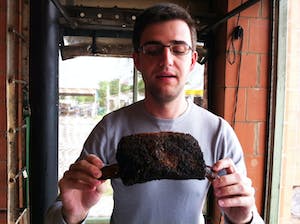 And speaking of money, the price of beef ribs is also hard to predict. While brisket costs can vary by as much as twenty or thirty cents a pound, Justin Fourton of Pecan Lodge has seen the prices of raw beef ribs go from $3.25 per pound less than a year ago to now more than $5.30 per pound. They were originally $16 per pound on the menu, but he had to make a choice of taking them off the menu or raising the price to $18 per pound. But the customers’ appetite never waned: they’re one of the first things to sell out, Fourton says. Even so, he laments, “They are by far my lowest margin item on the menu.”

The size of beef ribs can also vary considerably. For a while Fourton was getting twelve racks of beef ribs in a sixty-pound box. Then one day a box showed up with just six racks. The total weight was still the same, but every rib weighed twice as much as the each rib in his normal box. This not only caused some sticker shock with customers when a single rib cost more than thirty dollars, it also cut into his bottom line. Pecan Lodge has a menu item called “The Trough” which had a little of every meat on their menu for one price of sixty-five dollars. It includes a beef rib. When the ribs are running at three-quarters of a pound things work out fine, but throw a one and a half pound rib on there and all of a sudden they either break even or lose money on this huge plate of meat.

John Lewis of La Barbecue would just as soon see beef ribs off of his menu. While he loves the flavor and the positive reactions from customers, they just don’t make any money. “With what we’re paying for beef ribs versus what we’re charging, we’re pretty much breaking even on them,” Lewis says. “It’s a novelty.” He also points out that they require a lot of  pit space, making every square inch of that break-even space; he’d rather fill the pits with more profitable brisket.

The cool factor of beef ribs has also hooked joints like Lockhart Smokehouse and Cattleack Barbecue in Dallas and Franklin Barbecue in Austin, but these three have made the cut a specialty item only served once a week (Wednesdays at Lockhart Smokehouse and Saturdays at Cattleack and Franklin). Aaron Franklin said they just got their shipment of beef ribs for the weekend and the box containing 48 ribs was almost $500. That’s $10 per rib before the cost of trimming, seasoning, smoking, labor, and overhead is factored in.

All of these joints use plate short ribs, or IMPS #123A.  This includes ribs six, seven, and eight which are cut just below the ribeye. The marbling is even and the size of each rib, which can be the size of a forearm, is pretty much uniform. For a fine dining setting like Smoke in Dallas the consistency is important. Chef Tim Byres says he needs the same size rib on each plate when more than one person at the table orders one of their popular “Big Rib” entrees. Plate ribs provide that size consistently, but they’re also very large, and Smoke doesn’t charge by the pound. “People love them, but they’re not a money-maker,” says Byres, who concedes that they’re too popular to take off the menu so he just eats the cost.

John Mueller in Austin takes a slightly different approach. He smokes beef chuck ribs, which, like plate short ribs, are laced with fat and collagen. Racks generally come with four bones, ribs two through five on the carcass as defined by IMPS #130. They are cut just above the brisket and a rack is rectangular in shape. The shape of the meat on each bone isn’t as consistent as a plate short rib, but they’re always smaller. They’re also dense and don’t take up as much pit space as pork ribs, which Mueller would sooner do without than beef ribs. He pays $3.39 per pound raw currently and charges $15.98 per pound for the finished product because of the considerable shrinkage that happens while cooking. Wayne Mueller at Louie Mueller Barbecue in Taylor also uses the chuck short ribs. While he’s seen the price raise in the recent past it hasn’t gotten too high to get him merely to the break-even point. It’s also one of things Louie Mueller is famous for.

Ronnie Killen at Killen’s BBQ in Pearland also uses the chuck rib. He includes them on his beef rib plate, which he charges a flat rate for, not a per pound cost. But he does also cook the plate ribs, but he saves those for folks who want to buy by the pound. Killen may have found the sweet spot when it comes to profitability.

But as evidenced by their popularity, it’s clear that the people want beef short ribs. From here we’ll just have to see if the prices for beef can settle and allow pitmasters to gauge a fair price to keep them as a profitable menu item, not matter how thin that profit is. John Lewis has thought about using higher quality beef, but that would come at a higher price. “I don’t know how much more we could charge and still have people buy them,” he says. My guess is the ceiling’s pretty high. If they taste better than the one I bought during my last visit, I know I’d snap one (or two) up.