All cowboy boots, whether made by hand or by a big manufacturer, whether constructed of calf or cordovan or ostrich, are only as good as the sum of their parts and the process by which they come together. The artisans at Little’s Boot Company, in San Antonio, have been practicing the exacting craft since 1915. There, in a small South Side shop and showroom, the fourth- and fifth-generation Little family bootmakers, along with a small cadre of skilled workers, painstakingly measure, cut, last, stretch, stitch, sole, and, finally, finish cowboy boots. We dropped in for a tutorial.

After the size and overall style of the boot has been determined and the leather has been chosen and cut from a pattern, this portion of the boot, also known as the shaft, is decorated with inlays and overlays and ornamental stitching. The upper typically features the boot’s pulls, sometimes called ears, and a scallop, which is the V-shaped dip at the front and back of the shaft. Most often, this part of the boot starts in two pieces, a front and a back, that are joined at the sides at a seam that might feature subtly decorative piping.

The portion of the boot that covers the foot consists of three parts. The rear, known as the counter, is reinforced inside with extra-stiff material (typically leather), which serves to stabilize the foot. The vamp is the lower front end of the boot. It is stretched over a last, a foot-shaped form (historically wooden, now usually plastic) around which the lower boot comes together. The lasts for custom boots precisely mimic a client’s foot, whereas the lasts used for mass-produced boots are standard shoe sizes. The vamp might feature a toe wrinkle, a small series of stitched lines across the top of the foot, as well as a toe bug, a small stitched decoration near the front. A layer of thicker leather inside the front tip of the vamp forms a sturdy toe box. Finally, the insole is attached to the bottom of the last, and the counter and vamp are pulled over it and tacked into place.

Between the insole and the earth is the welt, a thin layer of leather that connects the lower to the sole. (To cut costs, some manufacturers use plastic welts.) A shank, most often steel, is attached to the welt to create a bridge along the arch of the foot. Then a heavy-duty leather outsole is glued and stitched to the welt, and a rubber-capped heel, made of stacked leather, is glued together and nailed on.

The last is removed, excess bits of leather and thread are trimmed, final dyes are applied, and the boots are polished and buffed. 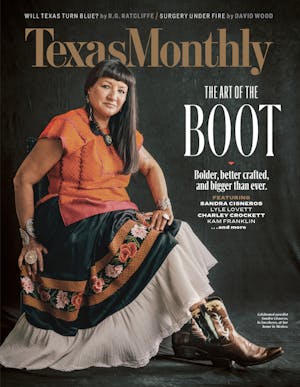