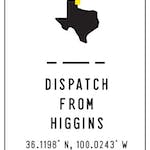 Situated on the crest of a small hill, surrounded by miles and miles of sunbaked prairie, Higgins (population: 429) is a bleak little place. Downtown consists almost entirely of vacant storefronts, surrounded by a neighborhood of one-story homes and sagging trailers, many of them in need of a coat of paint. Unleashed dogs trot up and down unpaved streets, and tumbleweeds drift past playground equipment at the city park. “Whenever we get a hard wind, we always joke that this could be the day that Higgins finally blows away,” Kay Boughan, the 58-year-old owner of the Donut Shop Cafe, on Main Street, told me in late February. She puffed on her cigarette as she popped a tray of biscuits into the oven. “Maybe you’ve noticed, but there ain’t all that much left to blow away.”

As Texas’s population booms in the cities, the suburbs, and along the corridors of Interstate 35 and Interstate 45, many rural communities are emptying out: a slow, steady decline of farmers, ranchers, merchants, and their families. According to Lloyd Potter, the state’s official demographer, 99 of Texas’s 254 counties—“almost all, if not all of them, distinctly rural,” he said—lost residents between 2010 and 2015. Nowhere is the change more dramatic than in northwest Texas and the Panhandle, where some of the last of our fabled cowboys can still be seen riding the open range on horseback. “Back in the thirties, we had close to a thousand people living in Higgins,” said Clifford Schwab, a 78-year-old retired wheat farmer and lifelong Higgins resident. “Now we’re down to a few hundred farmers, ranch hands, oil-field workers, and schoolteachers. Mostly we’ve got a lot of retired people like me who are living out our last years, waiting to be taken away to the cemetery on the hill.”

Higgins is not close to anything. The nearest Walmart is 50 miles away, in Woodward, Oklahoma, and the mall you can get to quickest is 135 miles away, in Amarillo. There’s no police department (the county sheriff’s office is in Lipscomb, 20 miles away) and no hospital (the Hemphill County Hospital is in Canadian, 25 miles away). When I stopped by Higgins City Hall, a low-slung, two-room brick building on Main, I met a young mother named Raven Callahan, whose husband runs Mike’s Auto, one of the town’s two auto-repair shops. She gave me a pleasant nod and said, “I’d like to stay and talk, but I’ve got to take my daughter to her weekly dance lesson in Booker, forty-nine miles away.” She smiled. “If you live in Higgins, you better get used to driving.”

Besides the Donut Shop and Mike’s Auto, Higgins’s businesses include a small bank, a flower shop, a convenience store and gas station, a couple of water-well service firms, a company that sells propane and other fuels, an auto salvage yard, a chain-saw-sharpening shop, a roofing company, and a restaurant called the Haystack, which just opened in February and is run by Sanja Hext, a rancher’s daughter who lives in the nearby unincorporated community of Glazier. “The reason we’re here, to be honest with you, is because my dad needed a place to eat lunch while driving between his properties,” said Hext, who used to enter barrel-racing competitions in amateur rodeos.

Higgins was first settled in 1886, and a year later, the Santa Fe Railroad arrived. (Higgins is named after G. H. Higgins, of Massachusetts, a wealthy stockholder in the Santa Fe.) A saloon and a school were opened, and soon came a livery and a newspaper. Almost all the surrounding farms and ranches were owned by families who usually farmed land by the “quarter”: 160 acres, one fourth of a square mile. They came into town to buy supplies, trade goods, and socialize. As more stores opened, downtown was revamped in 1911 and again in 1929. A tornado ripped through in April 1947, claiming 45 lives and knocking down most of the buildings, but Higgins endured.

In the early sixties, the town could boast a population of more than seven hundred. There were a couple of grocery stores, a couple of hotels, a couple of dry-goods stores, a movie theater, a grain elevator, a rodeo arena, a John Deere dealership, and five full-service gasoline stations. The town began an annual observance of Will Rogers Day in honor of the cowboy philosopher from Oklahoma, who had worked on a Higgins ranch in 1898, when he was nineteen. “Lord Almighty, it was a celebration,” said Boughan. “Everyone dressed up in their best Western wear and rode horses. We had a parade that lasted an hour, complete with covered wagons. Will Rogers Day was always held in August, and it was as hot as blazes, but no one cared. For us, this was what good living was all about.”

By the dawn of the seventies, however, commodity prices were declining and agricultural costs were increasing. “It became next to impossible to make a living on just a quarter of land,” said Schwab. “The family farmers and ranchers couldn’t produce the large volume of crops or cattle necessary to stay in business, and many of them had to sell out to bigger operations.” Some residents found work in the nearby oil fields, “but that business, as you know, is cyclical,” Schwab said. “All in all, it was tough. The train was no longer stopping at the Higgins depot. A lot of kids who grew up here began moving away after high school, because there was nothing for them to do.”

In recent years, Higgins’s leaders have come up with various ideas to promote the town, including a proposal to establish an economic development district that would offer property-tax incentives for manufacturing firms looking to relocate. “But it went nowhere,” said Carol Barton, the city secretary. “One or two companies showed interest in coming here until they learned that we didn’t have any available homes to house their employees. There hadn’t been any new home construction in years. We did have some abandoned homes, but they were in such bad shape that there was no way to live in them.”

Today, the one thing everyone agrees on is that the public school must be saved. Its one building serves 140 students, from pre-K to twelfth grade; there are 8 high school seniors. “When a small town loses its school, then you know the end is coming,” Paula Meller, a Higgins native who has taught English, drama, humanities, and Spanish at the school for thirty years, told me. “No kids literally means no future for us.”

Since 2007, the school district has bought twenty mobile homes, most of which are rented for $100 a month to new teachers who can’t find a place to live. The other trailers are rented for $400 to $500 a month to out-of-town parents who have agreed to move to Higgins and send their children to the school. “We’re doing fine for now, but I constantly worry about the economy getting worse, which would mean more young families around here leaving,” said Steve James, the school superintendent. “If our average daily school attendance drops below ninety students, then the amount of funding we receive from the Texas Education Agency will automatically drop. And if that happens, we’re in serious trouble.”

After visiting city hall, I made my way to the school, where I got to watch 17 of the 32 high school students rehearse scenes from This One Thing I Do, a play about the life of Susan B. Anthony, for the upcoming University Interscholastic League district competition. “We all complain that there’s nothing to do in Higgins,” said Madison Woods, a senior who lives on a farm outside town, afterward. “But deep down, we know there’s a lot of advantages to small-town life. Besides being in the play, I’m on the girls’ basketball team, the track team, and the golf team.” (I later learned that the golf team practices on a public course in nearby Shattuck, Oklahoma.) Woods continued, “I’m on the science team, and I’m in the National Honor Society. I’ve been a cheerleader for our six-man football team. On the weekends, my friends and I drive the dirt roads, and in the summers, we fill up the bed of a pickup truck with water and go swimming in it.”

After graduation, Woods plans to attend Southwestern Oklahoma State to study biology. I asked if she imagined herself returning to Higgins. “Well, I’d like to go to dental school and become an orthodontist, so I’d need to live somewhere bigger,” she said. She let out a sigh. “But I love Higgins. When I think about it, I wish I could raise my kids in a place like this, where people know and look after one another.”

When I asked Higgins residents about their political leanings, they unabashedly acknowledged that they had voted for Donald Trump, largely because they believed he would stimulate the economy and give their town a better chance of survival. “Out at the cemetery, my grandfather’s tombstone reads, ‘Here Lies a Democrat,’ ” Nancy Habekott, a reading teacher at the school and an oil-field worker’s wife, told me as she took a break from class. “I don’t think anyone in my family has ever voted Republican. I know I haven’t. But I did in 2016. I realized that I was one of those regular small-town Americans the Democrats had forgotten. And I didn’t want to be forgotten.”

“I felt the same way,” said Habekott’s niece, Clarissa Allen, the school’s secretary. “I’ve decided to run for mayor of Higgins this spring. My campaign slogan may be ‘Make Higgins Great Again.’ ” The 39-year-old chuckled. “I’ve never run for office before, so we’ll see what happens.”

In early March, one week after I’d left Higgins, a series of calamitous wildfires swept across the Panhandle, ultimately burning almost 480,000 acres, killing four residents, and destroying scores of livestock. One of the blazes kicked up in western Lipscomb County and headed east, straight for Higgins. The members of the Higgins volunteer fire department raced out to battle the flames, but they made little progress. “It doesn’t look good,” city secretary Barton told me when I got her on the phone. “If the fire gets to town, we’ll be done for good.”

Throughout the afternoon, the fire kept moving, fueled by strong winds. The sheriff ordered everyone in Higgins to evacuate to Oklahoma. Parked on the other side of the state line, the town’s residents huddled around a radio scanner, listening to reports that the flames were licking at the edge of the park. A few people broke down in tears. It was only a matter of time, they felt, before Higgins was gone forever.

And then, for seemingly no reason at all, the wind shifted to the south. The fires moved toward some empty pastures. By ten-thirty that night, residents were allowed to return to their homes. “It was like an act of God,” Habekott told me later. “How else can you explain it?”

The next day, the members of the volunteer fire department drove around the back roads, making sure there were no more fires threatening their town. They found nothing. Back in Higgins, those who had jobs went to work, and the kids returned to school. People stopped at the Donut Shop for coffee, the Haystack for lunch, and the convenience store for eggs, milk, and beer. Late that afternoon, residents stood in their yards and watched the sunlight bounce against the clouds and the smoke hang in the air.

I called Barton one more time to see if there was anything new to report. “No, we’re just hanging on,” she said. “That’s pretty much Higgins for you. We’re hanging on.”

You Can Lead Cows to Water, But Can You Make ’Em Swim Across the Colorado River?

A West Texas Roundup, Without All That Hoopin’ and Hollerin’

By Bob Phillips
Being Texan