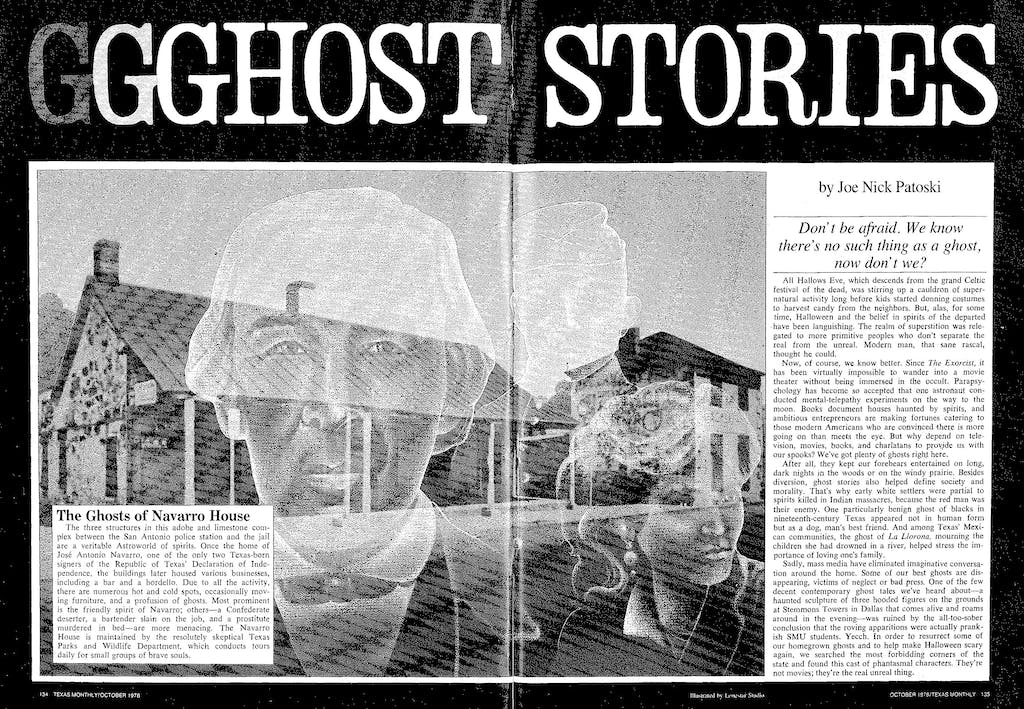 All Hallows Eve, which descends from the grand Celtic festival of the dead, was stirring up a cauldron of super­natural activity long before kids started donning costumes to harvest candy from the neighbors. But, alas, for some time, Halloween and the belief in spirits of the departed have been languishing. The realm of superstition was rele­gated to more primitive peoples who don’t separate the real from the unreal. Modern man, that sane rascal, thought he could.

Now, of course, we know better. Since The Exorcist, it has been virtually impossible to wander into a movie theater without being immersed in the occult. Parapsy­chology has become so accepted that one astronaut con­ducted mental-telepathy experiments on the way to the moon. Books document houses haunted by spirits, and ambitious entrepreneurs are making fortunes catering to those modern Americans who are convinced there is more going on than meets the eye. But why depend on tele­vision, movies, books, and charlatans to provide us with our spooks? We’ve got plenty of ghosts right here.

After all, they kept our forebears entertained on long, dark nights in the woods or on the windy prairie. Besides diversion, ghost stories also helped define society and morality. That’s why early white settlers were partial to spirits killed in Indian massacres, because the red man was their enemy. One particularly benign ghost of blacks in nineteenth-century Texas appeared not in human form but as a dog, man’s best friend. And among Texas’ Mexi­can communities, the ghost of La Llorona, mourning the children she had drowned in a river, helped stress the im­portance of loving one’s family.

Sadly, mass media have eliminated imaginative conversa­tion around the home. Some of our best ghosts are dis­appearing, victims of neglect or bad press. One of the few decent contemporary ghost tales we’ve heard about—a haunted sculpture of three hooded figures on the grounds at Stemmons Towers in Dallas that comes alive and roams around in the evening—was ruined by the all-too-sober conclusion that the roving apparitions were actually prank­ish SMU students. Yecch. In order to resurrect some of our homegrown ghosts and to help make Halloween scary again, we searched the most forbidding corners of the state and found this cast of phantasmal characters. They’re not movies; they’re the real unreal thing.

The Ghosts of Navarro House
The three structures in this adobe and limestone com­plex between the San Antonio police station and the jail are a veritable Astroworld of spirits. Once the home of José Antonio Navarro, one of the only two Texas-born signers of the Republic of Texas’ Declaration of Inde­pendence, the buildings later housed various businesses, including a bar and a bordello. Due to all the activity, there are numerous hot and cold spots, occasionally mov­ing furniture, and a profusion of ghosts. Most prominent is the friendly spirit of Navarro; others—a Confederate deserter, a bartender slain on the job, and a prostitute murdered in bed—are more menacing. The Navarro House is maintained by the resolutely skeptical Texas Parks and Wildlife Department, which conducts tours daily for small groups of brave souls. 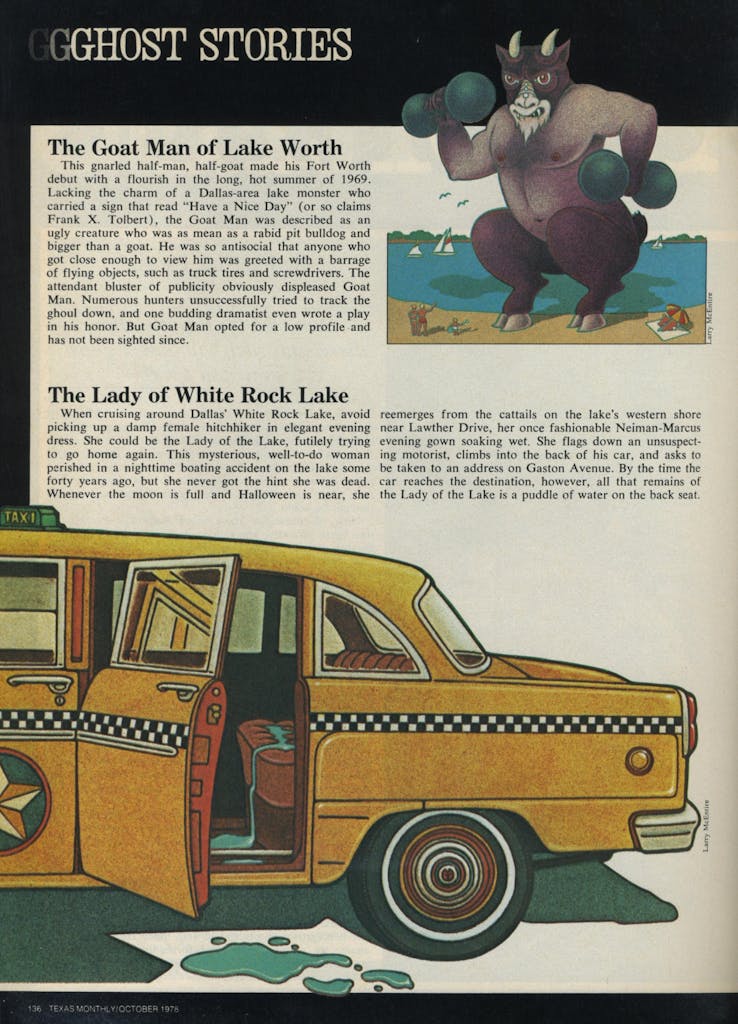 The Goat Man of Lake Worth
This gnarled half-man, half-goat made his Fort Worth debut with a flourish in the long, hot summer of 1969. Lacking the charm of a Dallas-area lake monster who carried a sign that read “Have a Nice Day” (or so claims Frank X. Tolbert), the Goat Man was described as an ugly creature who was as mean as a rabid pit bulldog and bigger than a goat. He was so antisocial that anyone who got close enough to view him was greeted with a barrage of flying objects, such as truck tires and screwdrivers. The attendant bluster of publicity obviously displeased Goat Man. Numerous hunters unsuccessfully tried to track the ghoul down, and one budding dramatist even wrote a play in his honor. But Goat Man opted for a low profile and has not been sighted since.

The Lady of White Rock Lake
When cruising around Dallas’ White Rock Lake, avoid picking up a damp female hitchhiker in elegant evening dress. She could be the Lady of the Lake, futilely trying to go home again. This mysterious, well-to-do woman perished in a nighttime boating accident on the lake some forty years ago, but she never got the hint she was dead. Whenever the moon is full and Halloween is near, she reemerges from the cattails on the lake’s western shore near Lawther Drive, her once fashionable Neiman-Marcus evening gown soaking wet. She flags down an unsuspecting motorist, climbs into the back of his car, and asks to be taken to an address on Gaston Avenue. By the time the car reaches the destination, however, all that remains of the Lady of the Lake is a puddle of water on the back seat.

The Fiddling Janitor
Strauss waltzes have filled the rotunda of the old Hous­ton Public Library ever since its completion in 1926, thanks to kindly Mr. Cramer, a janitor who worked and lived in the library until his death in 1936. A notorious loner, Mr. Cramer enjoyed walking through the halls with violin in hand and his shepherd dog, Pete, by his side. He could most often be found on the balcony in the rotunda, sawing away at a mournful tune. Mr. Cramer so enjoyed his vocation that he has continued his fiddling through the years, especially during stormy weather. If spirits can survive renovation, Mr. Cramer’s violin solos will doubtless be heard wafting from the balcony again when the building reopens as the Houston Metropolitan Research Center early next year. 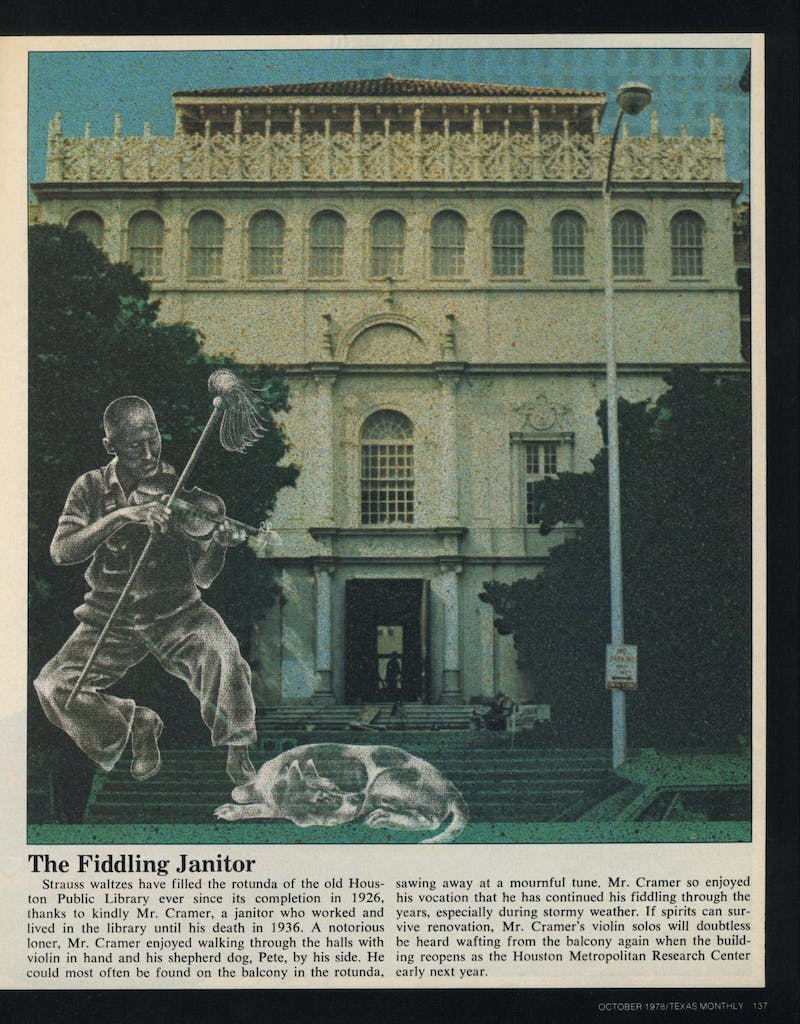 Bailey’s Light
If a bright orange light the size of a basketball passes by your car as you are driving down Highway 35, don’t stop unless you have some hooch in the trunk. It’s just old Brit Bailey, the elder statesman of Texas ghosts, wandering around looking for a drink.

Bailey was buried on the coastal prairie between Angleton and West Columbia in 1833. As he had requested, he was interred standing up and facing west with his gun over his shoulder and his powder horn by his side.

Old-timers say Bailey’s spirit is on the prowl because the one burial request denied him was a jug of whiskey to take to the Promised Land. Supposedly, he appears every seven years on a cold, drizzly autumn night, but Angleton ghostologist Catherine Foster thinks Bailey has been “real thirsty” recently, because sightings have been more frequent. Progress exacts a heavy toll, even from senior citizen spooks: right in the mid­dle of Bailey’s Prairie, the ghost’s favorite haunt, there now sits a sub­division. 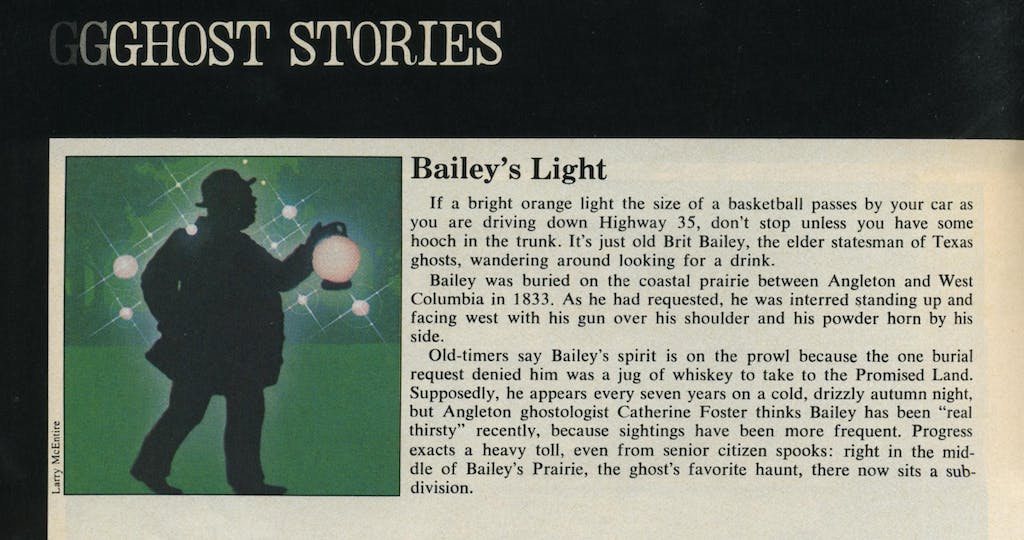 The Haunted Tracks
Although the hundred-yard approach to this unmarked railroad crossing on Villamein Road southwest of San Antonio is actually a gradual decline, it gives the visual impression of rolling uphill when you place your car in neutral gear.

Back in the forties, a bus full of schoolchildren stopped on these tracks and was hit by a highballing freight train. Most of the students were killed. Now, whenever a car rolls up to the crossing, the spirits of the children are standing by, ready to push stalled vehicles over the tracks. On nights when the dew is heavy, it is said, their tiny hand­prints appear on the trunks of cars. Should an auto hesi­tate on the tracks too long, its windshield will shatter because of the frustration of the child spirits. 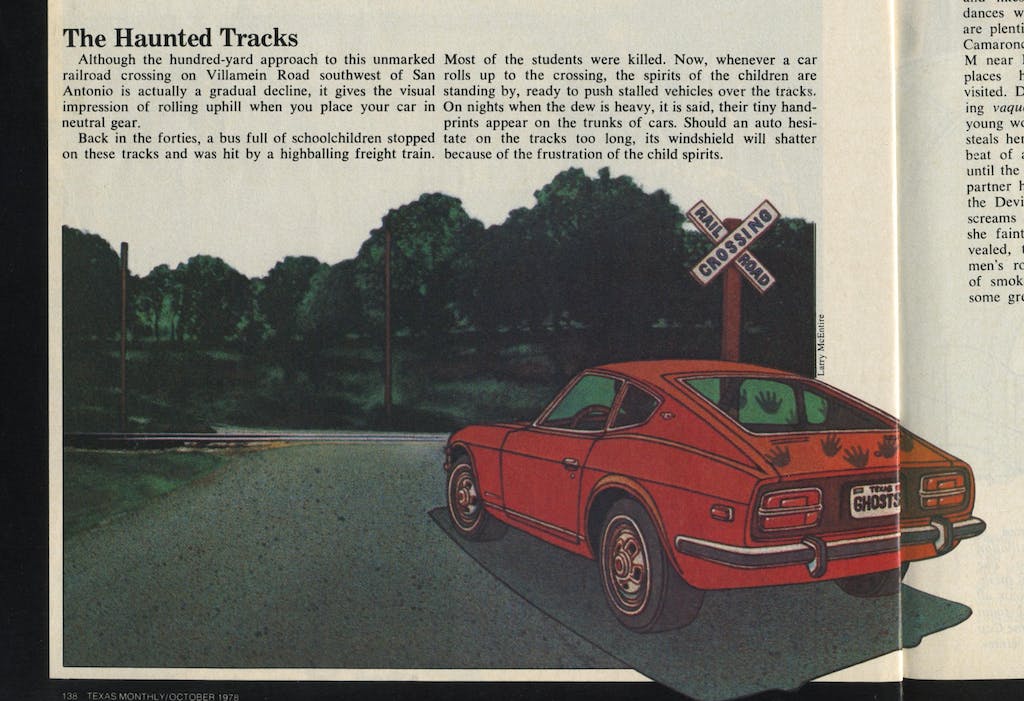 Devil with Chicken’s Feet
Stay away from Latin nightclubs in South Texas on Halloween unless you want to meet the Devil. The same fellow who gave us Hell, torment, and Tabasco sauce loves conjunto music and likes to make the scene at dances where beautiful señoritas are plentiful. San Antonio’s El Camaroncito and the Rockin’ M near Lockhart are two places he has recently visited. Dressed as a dash­ing vaquero, he finds the young woman who is playing hardest to get, then steals her heart away on the dance floor to the beat of a polka. It is Love Story revisited—until the chosen lady notices that her talented partner has chicken’s feet, a typical sign of the Devil. The poor señorita emits a few screams of “¡Sus pies! ¡Sus pies!” before she faints. But it is too late. Once revealed, the Devil disappears into the men’s room, leaving behind a cloud of smoke, the smell of sulfur, and some great dance steps. 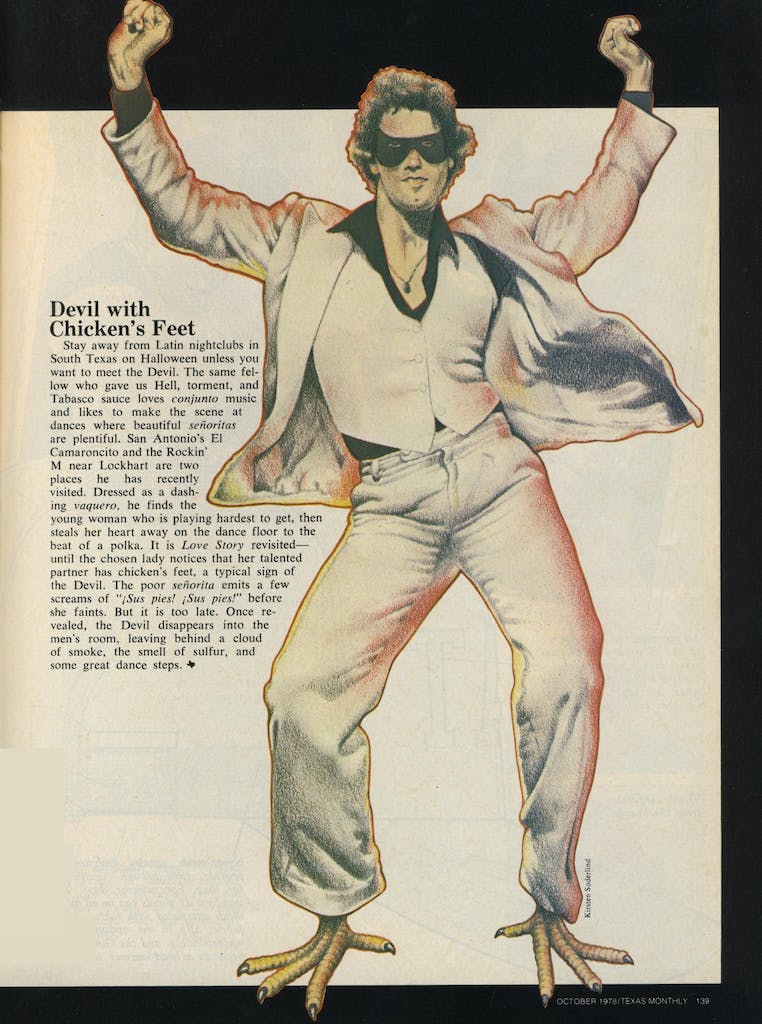