Police unsuccessfully searched for a monkey that was reportedly running loose on the streets of Santa Fe.

A group of angry customers at a Houston Popeyes threatened employees with a gun after the restaurant ran out of chicken sandwiches.

The homecoming queen at S&S High School, in Sadler, shared her crown with one of the runners-up, a friend of hers who has Down syndrome.

A Harris County teenager accomplished the rare feat of earning all 137 merit badges offered by the Boy Scouts of America—plus a 138th, which has since been discontinued.

A 411-pound feral hog was removed from a San Antonio golf course.

The Comal County Crime Stoppers offered a $600 reward for information leading to the arrest of a woman wanted for possession of a controlled substance who goes by the nickname Sasquatch.

Law enforcement in Brewster County discovered an abandoned SUV with 1,127 pounds of marijuana inside, along with the suspected driver’s wallet.

A man who believed he was wanted by the police drank seven beers in order to work up the courage to turn himself in and then showed up drunk at Parker County Jail—only to learn that he was not, in fact, wanted, and was promptly arrested for public intoxication. 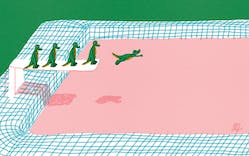 Meanwhile in Texas: Five Baby Alligators Were Found in a Hamlin Backyard Pool