The Coronavirus Pandemic
Read our Coverage
In our series "Notes on a Pandemic," we invite Texans to share their coronavirus experiences with us—both the lighthearted moments and the deeply painful ones. Abraham Barberi is an ordained Baptist minister in Brownsville, where he lives with his wife and their four children. He founded One Mission Ministries, and for the past two years he has been part of a group of people from local churches and nonprofits, like Team Brownsville and Resource Center Matamoros, helping the thousands of asylum seekers in Matamoros trying to cross the Gateway International Bridge. They are waiting there as a result of two Trump administration policies: “metering,” which allowed border patrol agents in the middle of the bridge to physically limit the daily asylum-requesting traffic, and the Migrant Protection Protocols (MPP), which required asylum seekers to stay in Mexico while their court dates were arranged. In late March, Barberi described the conditions in the camp to Michael Hall.

There are about 2,000 migrants in the camp now. It changes every day—20 new families arrive, then 40 leave. Two months ago, the government made everyone move from the plaza—a park near the bridge—to the river bank. They were more secure in the plaza. And now if it rains, the river bank is nothing but clay.

Starting on March 21st, they were only allowing U.S. citizens to cross. No volunteers are allowed by INM [Instituto Nacional de Migración], though they allow essential volunteers, so some of us can go, like people from Team Brownsville. Today I went to pay for water and firewood. Everyone was saying, “Oh, we thought you forgot about us!”

Before the coronavirus, there were volunteers every day—always groups of volunteers. We interacted with everyone, gave some words of hope. They got dinner; we went around and talked to them. It was a time of fellowship. Hanging out and singing. It was a distraction for them.

We had a school for little kids—elementary school kids—Monday, Wednesday, Friday. We had a teacher. There were two schools from other organizations too.

But now, there are almost no volunteers. A bunch of volunteer teams were coming for spring break—different churches and organizations coming to the bridge to help. But they canceled. They heard about the possible closing of the border. INM didn’t want any volunteers at the camps because of the coronavirus—all the volunteers are from the U.S. They don’t want me or any volunteers there all the time.

People aren’t allowed to gather. Church services have stopped, though people sometimes congregate for prayers or to read the Bible. The schools are closed. We used to bring meals and drinks—other organizations did too. We’re not bringing meals anymore.

When MPP (Migrant Protection Protocols) came into effect, there would be 25 people at the border, and we’d bring 30 meals. After MPP, it went to 40, then 60, then 80, then 100, then 300, then more than 2,000 people there. One of the biggest needs I identified was water—for drinking and bathing. They were using the river, and they were getting sick bathing there. We talked to INM: “We need to bring water.” They said no. It took about a month and they agreed to allow us to bring it in. I was able to get water tanks and bring water: nine 2,500-liter tanks, eight 500-liter tanks, distributed all over the camp. We were bringing 24,000 liters a day. Team Brownsville and RCM (Resource Center Matamoros) and other organizations helped too.

Now they can shower, wash their hands. Since the coronavirus hit, I’ve been talking to people, telling them to wash their hands, keep their distance from others. RCM and another group called Global Response Management have been doing a lot of the work educating the asylum seekers. I’m seeing people wash their hands more, though some don’t care. The kids don’t really think about it.

Last week I was there two days, and this week three days. I go now because I have to pay for things, deal with distribution, and do spiritual support.

I’m not afraid to get ill. I’m afraid I’ll give them the coronavirus, because I live in Brownsville.

With the coronavirus, today, there’s a spirit of gloom and sadness, and a sense that “I’m going to have to go back home.” They seem so hopeless. I think many are feeling they’re not going to get across the border. Before coronavirus, the asylum seekers already knew that 95 percent of them would not get across. The U.S. is not giving asylum unless you have a strong case. People don’t cross illegally as much now. If they get caught, they lose their chance to get asylum, and they go to prison or get deported back home. A lot of people just go home on their own. INM had already been offering asylum seekers rides back to the southern border of Mexico. They’re doing it more and more now. Whoever wants to go can get a ride.

I think this is a momentous time in history and God has allowed me the opportunity and the privilege to be part of something. It’s exhausting. It wears me out. But I think this is the right thing to do. 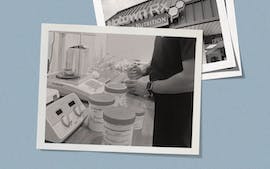 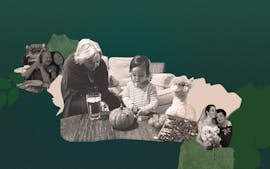