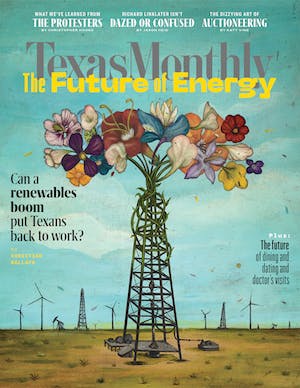 From the July 2020 Issue Subscribe
This article is part of our July 2020 “The Pandemic Has Changed Everything” package. Read more here.

The day before our first date, I told Benjamin—not his real name—that we couldn’t touch. “I plan to forgo any hugging or casual contact,” I messaged him through Hinge, sounding more like a lawyer arranging custody than a vixen of the twenty-first century. “Yeah . . . we have to be safe,” he agreed.

Before the pandemic, my pre-date disclaimers sounded more like this: No, I won’t send nudes. No, I won’t drive forty minutes to the suburbs to eat at an Outback Steakhouse and sleep with a near-stranger. I quit drinking a decade ago, bringing an end to my boozy, reckless hookup years. And once I was in my forties, I felt particularly out of sync with a swipe-to-match culture wherein sex was front-loaded and often felt transactional. I was burned out by what passed for romance. “I find you very attractive,” a man messaged me not long ago. “Would you be open to a friends-with-benefits situation?” That was his opener. Not “How’s your week?” Not “What are your hobbies?” But “Can I bone you on the regular, leave when I want, and still be buds?”

Then came the global pandemic. I checked Hinge in mid-March, curious to see what dating looked like in the social-distancing era. I wondered if the unfolding crisis would change how we engaged—maybe our new circumstances would make men more patient or conversations more dramatic, shaking up interactions that had become predictable and mundane. In recent years I’d had stray thoughts like The only thing that could save this broken dating culture is a giant asteroid. Well, one just hit.

It was a weird scene. My conversations on dating apps veered between layoff anxiety and toilet paper acquisition. On the Facebook group for single women where I lurk but never participate, users whiplashed between celebrating their single status and despairing over it, same as ever. Meanwhile, men accustomed to the churn of Tinder were clawing the walls. I got a text from a lab technician I’d had a few PG-13 dates with back in the old world. He immediately asked if we could have sex. When I said I thought we were better as friends, he sent a photo of a part of his body I definitely had not asked to see. What a long, tragic fall we’d taken from the days when you and your date flirted over a shared milkshake.

I matched with Benjamin the second week. Cute guy, nice smile. He grew up overseas. He liked Katy Perry’s “Teenage Dream.” I was in. He lived in a downtown condo not far from my place in East Dallas, and we decided to meet at a park nearby and walk to a restaurant offering curbside pickup. The day before our date, when I sent him the message clarifying that we couldn’t touch, I felt like a bit of a prude. Being uptight is the great sin of modern dating, but I also felt blameless—the pandemic made me do it. Benjamin didn’t mind. He told me not to judge him for his caveman beard—the barber shops were closed.

The next night, I slid on sneakers before heading out the door, a change from the four-inch wedges I normally wear on first dates, eager to look taller and thinner than my five-foot-two-inch frame. But I knew we’d be walking, and I could not bear the absurdity of wobbling in heels during the pandemic.

Benjamin pulled up to the park after seven. He tugged at his enormous beard as he sauntered toward me.

We wandered down the sidewalk four feet apart, but soon we were three feet apart, and then maybe two. I felt like a prim lass in a Victorian movie, strolling an English garden with a gentleman suitor who might one day promise himself to me. I’d noticed, over the years, that it was easier to open up when you weren’t looking directly at a person. And yet all my pre-pandemic first dates took place in coffee shops, where we sat across from each other, enduring face-to-face combat. Those hour-long dates, more like meetings, could have a dull efficiency: my life story, followed by your life story, and time’s up. My conversation with Benjamin unfolded at a leisurely pace. The pink sunset spilled across the sky, the birds were chirping, and a late spring breeze caressed my hair in a way that had a solid chance of looking sexy.

For the first time in my life, I’d shown up on a date knowing I wouldn’t be physical with a man: not because I didn’t like him, not because I wasn’t down, not because sobriety had illuminated the psychic cost of giving away my body in the race to be some sexual adventuress. No, I would not be physical with this man because of a government mandate. It sounded dystopian. But it was also freeing. I wondered what his arms might feel like under my fingertips. I imagined the smooth skin, the taut muscle, the alternating terrain of hard and soft. It had been a long time since I’d been confined to my side of the sidewalk—since I’d been forced to wonder.

I’d spent years in sobriety feeling outdated and old-fashioned—too much “work” for men accustomed to sure things. In quarantine, the world had slowed to my preferred pace—dating felt a little less lonely. A guy once told me he ditched women who didn’t have sex with him by the third date. The “sex by date three” rule was common, but the pandemic created a new rulebook. Any company was good company. Any date was a gift. Maybe it would be good for all of us to keep limiting our options, holding one another accountable, and paying more attention to the moral weight of our decisions.

After we’d eaten, Benjamin and I said goodbye on a sidewalk as the moon rose. “Well,” he began hesitantly, hands rising and falling at his sides. I knew he’d ditch the social-distancing rules the second I snapped my fingers, and it was nice to have that power. “Let’s do this again,” I said, and I began walking back to my place when he called to me. His eyes had a twinkle. “You want to FaceTime when you get back?” he asked.

Perhaps this was the new “Want to come upstairs?”—an invitation to take our evening to the next level. “Not a chance,” I said, blowing him a kiss. “But that was a good try.”

Sarah Hepola lives in Dallas. She is the author of Blackout: Remembering the Things I Drank to Forget.

This article originally appeared in the July 2020 issue of Texas Monthly with the headline “Finding the Old-Fashioned Romance in the New World of Dating.” Subscribe today.