No one grows up in Texas without internalizing the myth of our state’s exceptionalism in some way. I say “myth,” but that doesn’t mean that Texas is not, in fact, exceptional. I grew up here, and I’ll never not believe with my whole heart that Texas—even with all its contradictions and hypocrisy—is the best, coolest, toughest, most interesting state in all the USA. But as I got older, it became obvious that the legends upon which this initial belief was built—stories about the Old Three Hundred, the Texas Revolution, and the Republic of Texas that I learned in the state history courses we were required to take in fourth and seventh grades—were watered-down and Anglo-cized. Sometimes they were simply untrue.

Here’s what I was taught: Texas was “birthed” in 1824, when our “father,” Stephen F. Austin, settled 297 American families in what was then the Mexican frontier. A decade or so later, fed up with having our rights and freedoms trampled upon by the tyrannical Mexican government, we rebelled. The Mexicans demanded we surrender our cannon, but we told them to “Come and Take It.” Santa Anna then killed everybody at the Alamo. But we honored their memories at the Battle of San Jacinto, which we won not because of luck but because our ragtag band of Texians (with some Tejanos in supporting roles) were the good guys. Then—and this part’s extra cool—we were our own sovereign nation for nine whole years before agreeing to join the United States in 1845.

So much of Texas pride is rooted in those 21 years. The icons of Texas mythology—the “mavericks,” the wildcatters, LBJ barking orders while sitting on a White House toilet—are built upon the legends of the GTTs, the Anglo settlers and outlaws who left behind the comfort of established Southern states with just a note saying they had “gone to Texas.” But that’s not the whole story, not by half. Major players are left out of this narrative. Tejano revolutionaries like Juan Seguín and José Antonio Navarro are hardly given the same deference as Austin, Sam Houston, or even William Barret Travis, who, though he bravely died defending the Alamo, was an indebted pot-stirrer.

The myth also removes Black Texans from the state’s origin story. There is no mention of the free Black men and women who had lived in Spanish Texas for decades before Stephen F. Austin got there. Nor does the “Old Three Hundred” moniker reveal anything about the many enslaved Africans that those white Southerners brought with them from Alabama, Louisiana, Missouri, and Tennessee in the early 1820s. In the Anglicized version of Texas history that I learned as a kid, slavery was depicted only as a side note, an unfortunate institution that existed alongside Texas settlement, the revolution, and the republic, rather than as what it really was: the catalyst that fueled each and every one of those historical events. Texas’s economy as a colony and, later, a republic, was cotton-based and thus was built on the labor of enslaved people.

I don’t know exactly when I started learning the lily-white Texas myth; I cannot remember a time in which I did not remember the Alamo. But I do know that a unique part of a Texas public education is that a state-sanctioned version of the myth is peddled to Texas children starting at age nine.

In recent years, calls to challenge this story have gotten more attention. A Pearland student and his mom pointed out in 2015 that a geography textbook referred to enslaved people as “workers”; a year later, activists protested when the Texas Education Agency wanted schools to use a textbook that called Mexican Americans “lazy.” And the four-year fight to add Mexican American studies as an official course was contentious (the elective class was approved in 2018).

To get a sense of what the typical narrative looks like in detail, I purchased a used Pearson social studies book from 2016 titled We Are Texas, one of the dozen or so textbooks approved by the State Board of Education for fourth-grade Texas history. I was curious to see how it discussed settlement, the revolution, the republic, and the role slavery played in all of it. Here’s what I found, what I didn’t find, and what Daina Ramey Berry, the chair of the history department at the University of Texas at Austin, and University of North Texas history professor Andrew Torget think fourth graders ought to know.

It’s a textbook, after all, so there’s a lot to parse. We’ll be presenting this as a series, examining three important eras that make up the (incomplete) Texas myth: Anglo settlement, the Texas Revolution, and the republic.

The first mention of any Black person in this textbook is of Esteban, also called Estevanico. He was an enslaved Moroccan man brought on the Spanish Narváez expedition, whose vessel crashed on the Texas coast in 1528. It’s concerning that slavery is introduced as such a foreign concept here—something the Spanish and American Indians did. But not “us,” or whomever a fourth grader might understand to be “us.”

Perhaps more unfortunate is what isn’t said about Esteban—such as his real name, Mustafa Azemmouri—or any details about him outside of his enslavement. For example, he’d been enslaved for only a few years when he went on the Narváez expedition, and he went on to lead several more voyages for the Spanish crown before his death in 1539. “It’s really important for students to learn that Africans were free before they were enslaved,” says Berry. “I know that sounds so simple, but it is so important for young children to know that that Black people’s identity is not solely wrapped in slavery. Otherwise, if you don’t detach that, they think of Black people only as being a subservient class.”

What’s missing here is context. The only reason Moses Austin believed he could even get three hundred families to settle in Mexican Texas is because the cotton industry in the Gulf Coast states was booming between 1810 and 1820. (According to Torget’s book Seeds of Empire: Cotton, Slavery, and the Transformation of the Texas Borderlands, 1800–1850, “the number of cotton bales exported by the United States increased tenfold during the 1810s, and by 1820 the southern United States surpassed India as the world’s leading cotton producer.”) Free labor from enslaved people was what made cotton profitable. Because land in Mexican Texas would be much cheaper than land in the American South, Austin knew he could easily persuade prospective planters from Alabama, Louisiana, Mississippi, and other slave states to grow cotton in Texas. There was no question as to whether or not they’d bring their slaves. Keeping slavery legal was a key component of the success of Moses Austin’s settlement; Anglo settlement of Mexican Texas would not have happened without it.

Stephen F. Austin did spend a year in Mexico City ensuring that his father’s old Spanish land grant would still be recognized by the newly independent Mexican government. It took a long time for the Mexican congress to determine a new national colonization policy, and one of the issues that was difficult to resolve was the legality of slavery, which conflicted with the principle of individual liberty championed by the new republic. When the Mexican congress put forth a bill that allowed slaves in Texas, Austin wrote: “I am certain that if I had not remained in the capital to agitate this subject . . . the law would never have been passed.” Legal slavery was important enough to warrant the effort and time. “Stephen F. Austin was trying to bring Mississippi to Mexico. That was the plantation model he had in mind, which got him into battles within Mexico about the future of slavery,” Torget says. “Because in Mississippi, planters had the U.S. Constitution protecting slavery. In Mexico, they didn’t have that.”

Austin did need hard workers who would develop plots of land and bring industry and prosperity to the new territory. But the textbook fails to mention that as an incentive, Austin provided settling families eighty additional acres of land for every slave they brought with them. For his effort, Austin sometimes collected a fee of 12.5 cents for every acre, and settlers could pay this debt in “cash, cattle or enslaved people,’ ” according to Dr. Berry. “There is a definite connection between slavery and enslaved people to the land, and that was established early on.” But that’s usually not reflected in the Texas myth, and it’s not reflected in this textbook. 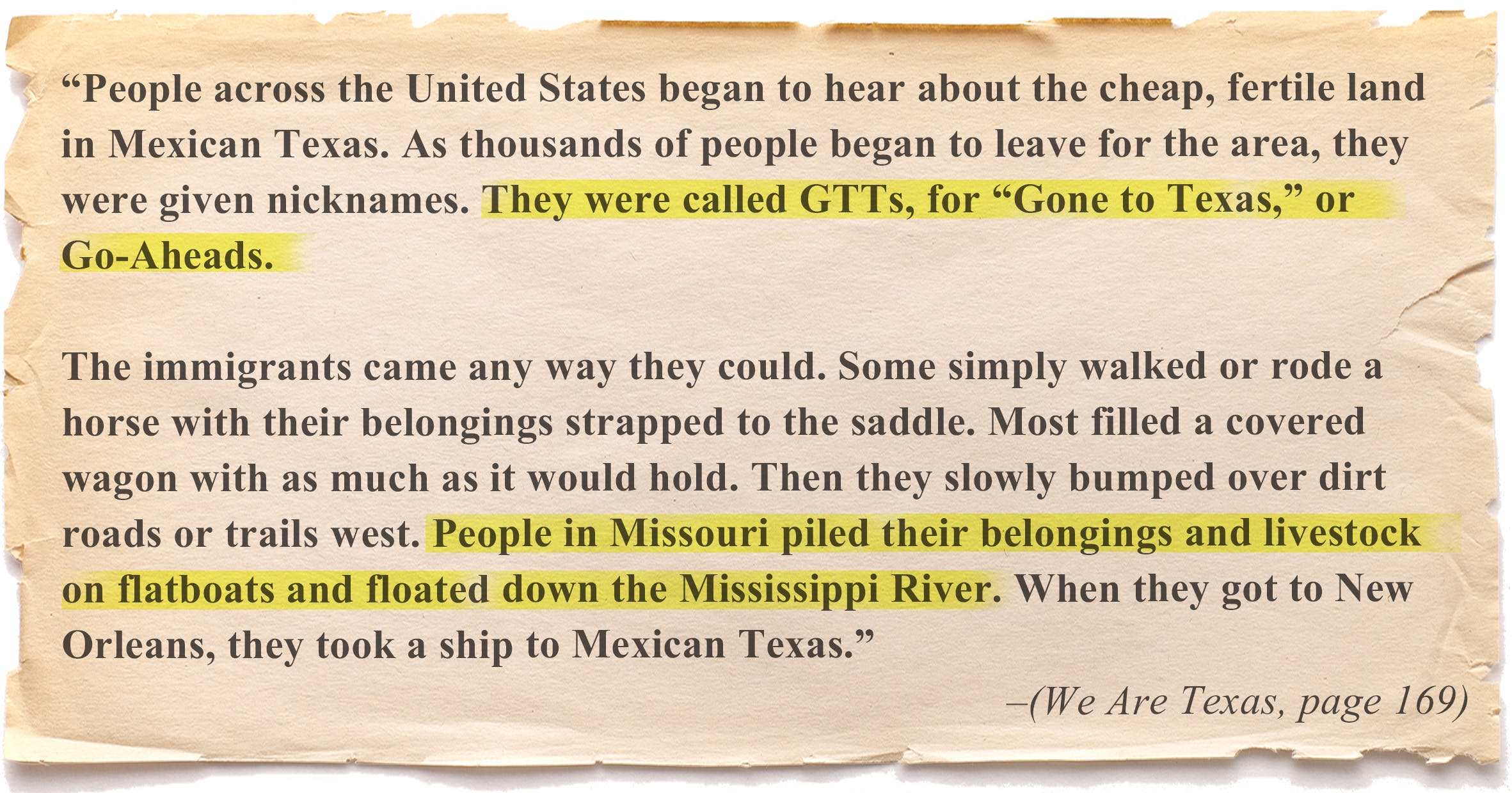 We Are Texas doesn’t mention the journeys of enslaved people and slave owners into Mexican Texas. Jared Groce, a planter from Alabama, brought ninety slaves with him using some fifty covered wagons. Because the book doesn’t include that information, readers assume the enslaved merely fall under the umbrella of either settlers’ “belongings” or their “livestock.” If the implication is that they are included with “immigrants,” that flattens the experiences of those who did not immigrate to Texas by choice; rather, they were trafficked. Though there were thousands of enslaved people brought into Texas during this time, some of them ancestors of current Texas children, they are not mentioned at all.

The Night the Astrodome Got Rained Out