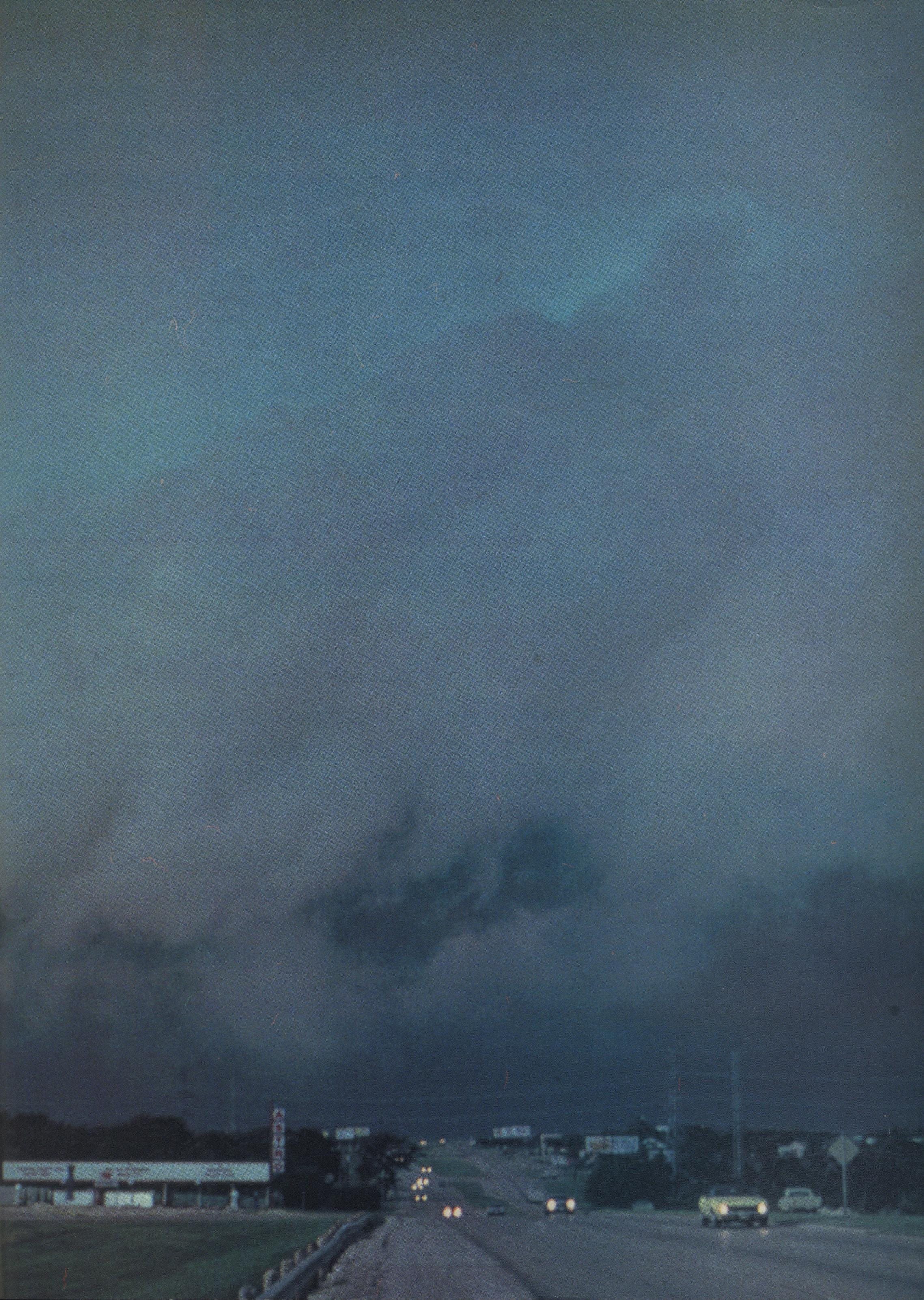 Kids in the panhandle climb windmills and water towers to watch the northers blow in. On clear fall days a white cloud rises from the prairie and quickly envelops the horizon, the upper part of it assuming the shape of an anvil. Because the low clouds are wet and stormy, the horizon often turns bluer than the sky above the cloud mass—hence the term “blue norther.” The sky turns gray as the front nears, and erratic winds whip up squalls of rain. With a plunge of temperature and a zoom of barometric pressure, the norther hits: a shock of dry, clean, Arctic wind.

Defined by the Encyclopedia of Atmospheric Sciences and Astrogeology as “a stormy northerly wind of sudden onset occurring during the colder half of the year over the region from Texas, southward across the Gulf of Mexico and the western Caribbean,” the norther is both an indigenous phenomenon and a parochial conceit. Wind change and evocative terminology set our cold fronts apart. Texas northers aren’t always blue—the nature, extent, and appearance of the cloud cover can vary greatly—but the characteristic wind always blows from the same source. Pacific cold fronts lack force in our winters because of the barricade of the Rocky Mountains. But only the Great Plains separate the Gulf of Mexico from the Arctic cold fronts that we call northers. No other continental area on earth allows strongly contrasting air masses to move so freely. The Arctic’s cool, dry, high-pressure systems shove against the warm, moist air of the Gulf. During the fall and winter, the dense cold air wedges underneath the humid warmth and moves southward very rapidly: A strong Arctic front can race from Canada to Texas within two days. The layer of moisture must be about five thousand feet deep for snow, sleet, or freezing rain to fall; if southwest winds off the Chihuahuan Desert have dominated the preceding weather, the norther’s passage can be dry and clear.

From February 11 to February 13, 1899, Texas’ worst norther of record pushed Panhandle temperatures to 23 below, left a thin sheet of ice on Galveston Bay, subjected Valley citrus groves to a freeze of 12 above, and chilled marrows as far south as El Salvador. Yet only in the Panhandle, and seldom there, do our northers produce blizzards like those common in the Midwest. From February 20 to February 22, 1971, three people died in one such storm; property losses ran to $3 million, mostly cattle that wallowed without feed in snowdrifts and suffocated because their nostrils froze and they couldn’t breathe through their mouths. The far milder ice storm that crippled Dallas and Fort Worth on December 30 and 31, 1978, cost six lives and $14 million. In the cities we assess a wet norther in numbers of freeway wrecks, schools closed, workdays lost, power lines down. Afforded full bragging rights, our winters can be severe, in two- and three-day bursts. But then comes the warming trend. Blue horizons notwithstanding, our Arctic cold fronts are distinctive because of the wind patterns that they share with the Caribbean tropics.

By mid-September we are yearning, on our tiptoes, for a hint of the first cold snap. But despite its invigorating effects, the norther may not be too good for you. According to the nascent science of biometeorology, the passage of a cold front increases the likelihood of angina pectoris, apoplexy, bronchial asthma, embolisms, and gallstone and kidney stone colics. Our attitude toward northers is ambivalent and, ultimately, forlorn. North Texans who are old enough to remember President Kennedy’s assassination associate it with the low gray norther that arrived about the same time. It was the last Friday of the high school football season, and few of the games were canceled. We shivered in the wooden stands that night and clung to our pretense of normality. The wind of the norther never blew quite so cold.

Remembering the Texas Town That Did, Indeed, Start the Fire