It’s been a tough year (did you check out the Bum Steer Awards?), which is why it’s never been more important to highlight the Best Things in Texas. Featuring special shoutouts to Matthew McConaughey, Houston officials Lina Hidalgo and Chris Hollins, and H-E-B’s Charles Butt.

Dynamic leadership—in politics, business, education, public health—has always been in short supply. But during this past, difficult year, Charles Butt, the CEO of the H-E-B grocery chain, has been a leader across the board. A longtime booster of public education and a thoughtful, bipartisan political donor, Butt found myriad ways during the pandemic to protect his customers and his employees. His company’s moves included putting purchasing limits on some products to deter hoarding and offering no-contact delivery to customers. Staffers (a.k.a. Partners) received pay raises to help them deal with this challenging time and were offered access to a COVID-19 hotline that provided them with urgently needed medical information.

And Butt’s concerns extended well beyond the ambit of his grocery empire. In September, after Attorney General Ken Paxton tried to limit Texans’ access to mail-in voting, Butt’s was the rare voice of opposition among Texas’s wealthy and powerful. He wielded his clout to urge the Texas Supreme Court to allow that option to all eligible voters as a public safety measure. Though the court ultimately ruled against the expansion, Butt’s bracing defense of our most essential right held our state’s highest-ranking officials to account. At 82, Charles Butt continues to set a civic example for business executives everywhere.

(This interview was conducted by email and has been edited for clarity and length.)

What advice would you give to other CEOs for helping employees through the pandemic and the accompanying economic distress?
Crisis response is a direct reflection of who we are as Americans, what we value, and who we want to be. My parents’ mantra was, “With privilege—whether inherited or earned—comes responsibility.” Many businesses and individuals have significant resources and power, and a time of national crisis is the time for both to be put toward our common goals. Most Texas households have no more than a shockingly slim financial cushion to meet a crisis like the one we’re in now.

So, my answer is: Value and invest in people and your communities. Be generous. Don’t wait until you’re asked. Do all you can!

What are the most important actions H-E-B has taken to create a sense that we’re all in this together?
When we first started seeing the impacts of COVID-19, we adopted the phrase “Texans Helping Texans” as a rallying cry. At H-E-B, we have tried to keep our prices low for our customers, while paying our Partners as much we can. I’m very proud of how our team has risen to the occasion.

For all our Partners who work in operations, including in our stores, plants, and distribution centers, we created Texas Proud Pay (the largest pay increase in the history of our company), extended sick pay, and offered discounted childcare. The list of special compensations in 2020 is a lengthy one and all of them were richly deserved by our people. I always wish we could do more. The latest addition was in October, when we paid a $500 bonus, pretax, to every Partner—full-time and part-time.

Our Partners have truly gone above and beyond during this crisis, and I couldn’t be prouder of what they’re accomplishing.

You’ve long been active in trying to improve public education in Texas. In a perfect world, what immediate improvements would you like to see? What long-term improvements?
Oh boy! How much time do you have?

Americans were the best educated people in the world when they finished high school . . .  until about 1970, when other nations began to move ahead. They have done so rapidly. The choices we have made in teacher pay and leadership haven’t kept up with the worlds of business, finance, technology, and science. Those worlds require the same skills and traits that are needed in our classrooms. How much does a well-qualified attorney make? More than most teachers. Yet a teacher’s challenge—to teach, inspire, motivate—is daunting. If you try teaching a class of high school students for nine months and truly preparing them well for college and life, you might feel nine years older afterward. It may sound easy, but it isn’t.

Our testing mentality hasn’t helped. Educators from countries that achieve better results in education than we do tell me they believe we are testing way too much and teaching way too little. While athletics and other school-based extracurricular activities help develop well-rounded students, they can’t come at the expense of solid academic preparation, which they do today.

The Texas Legislature passed an education bill last session. I call it the “dream bill for orthopedic surgeons” because there were so many broken arms traced to people patting themselves on the back over the new funding. While this was a major bipartisan accomplishment and greatly needed, Texas is still ranked forty-second among U.S. States in education funding per student. Self-congratulation should wait until we move out of the bottom ten states nationwide in funding for public education.

If you have a vague feeling that America is slipping fast, look to the way we educate our children.

What prompted you to write to the Texas Supreme Court about voting rights?
When I was a kid, about two hundred years ago, a strong belief was instilled in me that the more people who vote, the stronger our country and our democracy will be. Knowing that voting was going to be risky for some people this year as a result of the virus, I felt the Supreme Court should allow expanded access to applications for mail-in voting. My message was added to those of others who sought the same change. Ultimately, the Texas Supreme Court unanimously struck down this effort to expand voting opportunities.

As a consequence of this experience, I learned that the entire topic of voting has become politicized. Differences in opinion about who to vote for are what democracy is all about. Everyone makes their own choice. How the mechanics of voting are carried out should not, in my opinion, be politicized.

It seems to me that anyone who attempts to deny access to the vote is failing to live up to the spirit of democracy and of America at its best.

This article originally appeared in the January 2021 issue of Texas Monthly with the headline “No CEO Does More.” Subscribe today. 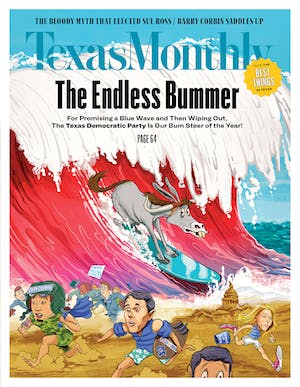