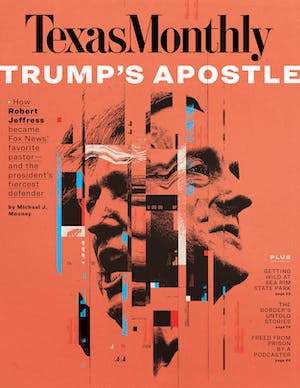 Q: As a Houstonian, I’m used to FM (Farm to Market) road designations and was surprised on an Easter trip to visit my in-laws in Austin to find 2222 designated as RM (Ranch to Market). Has it always been RM 2222 and I just never noticed it? And what’s the difference between an FM and an RM road, anyway?

A: There are few things in this world that bring the Texanist as much pleasure as a long drive down a winding ribbon of beautiful backcountry blacktop. Hey, why don’t you hop in and come along for a ride? Roll down your window, it’s nice out. Man, is there anything better? Wow, just look at that picturesque field of bluebonnets! And the sorghum is really thriving. Must be loving all the rain of late. And notice the —aaagh! Did you see those buzzards eating that armadillo carcass?!? The Texanist sure wishes he hadn’t.

Well, that was no fun. But let’s settle down, avert our eyes from the rear-view mirror and concentrate on the roads that brought you to the Texanist in the first place—holy smokes! That cloud over to the west looks exactly like Big Foot Wallace, don’t you think? You know, Big Foot Wallace, the famous Texas Ranger of yore. It’s said that while he was on his way from San Antonio to El Paso one time, after his wagon mules were hijacked by Indians, he walked the entire rest of the way, a very great distance, and then upon his arrival wolfed down twenty-seven eggs. Twenty-seven! What’s the most eggs you’ve ever eaten? The Texanist once ate nine raw ones on dare, stopping only because there were no more. Oooh-weee, the Texanist could drive forever. Yikes! Those goddang deer are like dadgum kamikazes.

Whoa. Please excuse the Texanist. He got lost in thought for a moment there and temporarily lost his way, too. Mentally speaking, that is. Before the metaphorical detour, he was about to say that when one finds oneself on a particularly fine example of Texas road, nine times out of ten it’s going to be one of the two-lane beauties that are part of our intricate farm-to-market network.

For this amazing web of bucolic byways, we can thank some forward-thinking politicians and the Texas Department of Transportation, who, decades ago, tasked themselves with “getting the farmer out of the mud”—in other words, making it easier for the farmer to get his or her goods to town by laying down some asphalt where none had been laid down before. The system of farm-to-market secondary roads goes back to 1936, when a section was constructed between Mount Enterprise and Shiloh, in Rusk County. But it was in 1949 that the legislature formalized the noble endeavor by passing the Colson-Briscoe Act, which allotted an annual $15 million in state funds for the construction of farm-to-market roads, a number that has been adjusted upward over time.

Today, there are more than 40,000 miles of these connective arteries splayed out across the state, accounting for more than half of Texas’s total highway mileage—which, by the way, is the largest highway mileage of any state in the country. Would you care to guess how many miles a day Texans travel on these roads? Well, if the Texanist told you to sit down and then said the number 70 million, would you believe him? Well you should, because It’s true. Seventy million! Every day.

Now, to answer your second, overarching question first, the Texanist must unpack one of the state’s great anomalies. Initially, all of the roads in the farm-to-market system were FMs. But this rankled ranchers, who apparently took offense at being referred to as farmers. In 1942, TxDot acquiesced and, voilà, the ranch-to-market road came into existence. Other than the appellation, though, there is no discernible difference between the two.

The rule of thumb today is that the FMs lie east of US Highway 281 and the RMs to the west of it, but that’s a very loose rule—see RM 2222, for instance, which is well east of US 281. All told there are 3,364 farm-to-market roads and just 180 ranch-to-market roads. And while the ranch-to-markets are sometimes informally referred to as “Ranch Roads,” which is what the signage for them says, there is only one officially designated Ranch Road, that being Ranch Road 1, which runs along the Pedernales River in Blanco and Gillespie counties just outside of Lyndon Johnson’s former ranch.

Over time, as urban sprawl has absorbed much of the countryside, many farm-to-markets (and ranch-to-markets) have come to serve as remnants of our more agrarian past—and as byways for harried commuters trying to get to the office before their boss peeks his head over their cubicle wall. There are many examples of this, such as Westheimer Road, in Houston, which was formerly known as part of FM 1093. The Texanist suspects this is one of those FMs you are well familiar with.

And then there is, once again, RM 2222, the source of your puzzlement. RM 2222, which, for various stretches, is known as Northland Drive, Allandale Road, and Koenig Lane, was never known as an FM road. It’s been an RM since it was so named by TxDot back in 1954. Or at least it was until about twenty-five years ago. You see, RM 2222, in Austin proper, isn’t really even an RM anymore. And the part of 1093 that’s located in Houston proper isn’t an FM, either. Technically speaking, both of these roads are now URs, which stands for “Urban Road,” a wholly unsexy appellation that, back in 1995, TxDot began using to reclassify the portions of FMs and RMs that, by no fault of their own, had suddenly found themselves running through cities. As far as the Texanist is concerned, Urban Road is an unworthy successor to the familiar and more Texas-y Farm and Ranch road designations.

Thankfully, the Texanist wasn’t alone in this thought. When TxDo started replacing the familiar old black and white “Farm Road” and “Ranch Road” signs featuring an image of the state with newer and blander “Urban Road” signs, the public outcry was so vociferous that TxDot thought better of its decision and decided, wisely, to leave the signage alone. The official files, however, still classify these roads as Urban Roads.

Speaking of roads, we’ve now come to the end of ours. Thanks for the letter. And remember to follow the signs and always drive friendly—the Texas way.