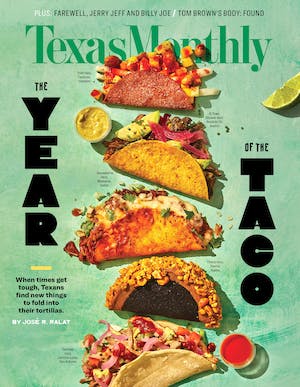 From the December 2020 Issue Subscribe
This column originally published on October 5, 2020.

Q: I’ve reached a point in this pandemic where I’m about ready to throw my school-age children’s iPads, iPhones, and laptops in the trash. The kids are on screens all day long! But if I do that (or even just hide the devices for a few hours a day), that means I’ve got to come up with other things for them to do. What sort of games did Texas children play back in the day that we could revive for the socially distanced era?

A: This is an excellent question for the less-than-excellent times in which we currently find ourselves. And, as evidenced by your own frustrations, it’s an especially important topic for the parents of young Texans. But the kids aren’t the only ones going overboard with the time spent in front of the screens. The Texanist has seen a marked uptick in the portion of his days that he himself spends with his various devices. Pallid complexion, glassy eyes, utter obliviousness to the goings-on going on around him—the Texanist has, on a regular basis, been exhibiting a cluster of traits that are strikingly similar to those that have been attributed to him the morning after a big night out on the town, even though it’s been some two hundred sad days since the Texanist has even been out on the town.

The thing is, whether they are young or old, and happen to be quarantining, social distancing, distance learning, officing at home, convalescing, or are just mired neck-deep in a bad case of the pandemical blues, folks are trying to avoid the tedium brought on by plague avoidance like, well, the plague.

In the beginning there was sourdough baking and neighborhood walking. And decluttering the home, and then revamping the home. And then, of course, there was the gardening, the short-lived fitness regimens, and the forays into healthy cooking. And the experimental mixology, craft beer obsession, and drawing, and crocheting, and puzzling, and watching all the Dean Martin Celebrity Roasts available on YouTube, and so on and so on and on and on, ad infinitum. (You know, time was the Texanist thought that the well-oiled comedy stylings of Foster Brooks would never get old. Alas, he was—hic!—wrong about that.) The Texanist has even dabbled in unicycle riding, new facial hair styles, rope tricks, amateur mycology, and staring at his bedroom ceiling. Actually, he did a lot more than dabble at the latter. By this point, the Texanist is pretty much the LeBron James of ceiling-staring.

All these months later, seeking distraction from the present situation continues to be an imperative for virtually everyone. And the default distraction for many of the youths—and, alas, for many of the adults, who should really know better—has been those ubiquitous damned screens, which, with their bottomless content and soothing glow, are devilishly addictive.

All of which is to say, again, you’ve posed a great question here. Harking back to simpler times for pastime options is a splendid idea. What’s old can be new again, as they say, right? Now, you didn’t mention your kids’ ages, but most any child who is equipped with enough mental and physical dexterity to indulge in Roblox ought to have few problems with most any of the activities the Texanist has in mind. The Texanist, though, as he has been instructed to do by the magazine’s lawyers, will let you have the final word as to which are and which are not suitable activities for your own children.

The Texanist: My Daughter Moved to Texas More Than a Year Ago. Why Hasn’t She Visited the Alamo Already?

So, with all the fine print taken care of and without further ado, here are a few activities that a young Texanist passed the time with while growing up during the largely pre-digital age in Temple that should provide hours of fun for the pre-collegiate set even today.

The Texanist hopes this list helps to alleviate your understandable frustration with your children. Heck, you might find some of them fun yourself, though the lawyers currently standing in the Texanist’s doorway have just reminded him that this decision is entirely your call and, further, that neither the Texanist nor his employers are responsible for any injuries to the knee or the hip or the cervical vertebrae that you may incur while trying to recapture your lost youth by engaging in an age-inappropriate game of tug-of-war or leapfrog or hole digging. And that goes double if you end up deciding that shooting apples off the heads of your children with a bow and arrow sounds like a good alternative to yet another hours-long session of Minecraft. Because it is not a good alternative to yet another hours-long session of Minecraft, not by a long shot.

Oh, hey, books! Books are always a great idea! And why not start with yours truly’s 2017 tome, The Texanist: Fine Advice for Living in Texas, which is almost 100 percent suitable for the kids and is available online and at your finer bookstores? And once you’re done with it, well, the Texanist hears it makes a pretty good stand-in for a Frisbee.