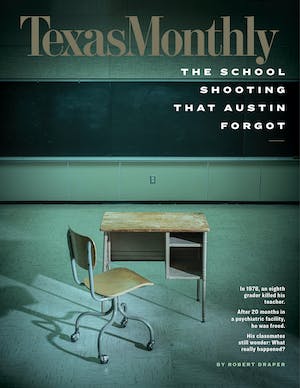 Q: For the first time in a number of years I find myself with a boyfriend and I’ve really been yearning to take a lovey-dovey getaway with him. But we need a little help: Where is the most romantic spot in Texas?

A: Congratulations on finally landing another beau for yourself, Ms. or Mr. Withheld. The Texanist is glad the drought is finally over—assuming that the recent dry spell was not self-imposed, that is. But even if your recent mateless period was the result of a voluntary vow of chastity, the Texanist, a man opposed to lonesomeness—except when it inspires classic tear-in-the-beer honky-tonk numbers—is glad it has come to an end. After all, the Texanist is himself no stranger to such stretches of solitariness; there have been those times in the past when his love-light shone quite brightly and, well, other times, darker times, when it was reduced to a dim flicker.

All of that business was a long, long time ago, however. Believe it or not, the Texanist is coming up on twenty years of mostly blissful connubial conjoinment with Mrs. Texanist later this very spring. And he is quite familiar with the joys of romantic getaways. (Though such trips occurred more frequently in his salad days, and what he once regarded as an amorous escape back then is probably not what he would recommend to anybody today.) In short, the Texanist is happy to help ensure that you won’t be entering another époque sans amour anytime soon—and happy, too, to offer some advice to the many Texans who have yet to make their plans for Valentine’s Day, which is just around the corner. So let him now slip on his couples counseling hat, arrange the travel brochures on his desk, and offer up a little assistance.

As the Texanist parenthetically alluded to in the previous paragraph, time was that he reckoned that a spur-of-the-moment overnighter to Nuevo Laredo for frog legs and Ramos gin fizzes at the Cadillac Bar was the very model of a romantic road trip. Then, too, there were the slightly less extravagant excursions to dusty small-town tractor pulls, dustier goat-roping events, and saliva-slathered watermelon seed-spitting contests, which the Texanist also regarded as the height of romantic travel. The Texanist is a little embarrassed to admit it, but he also used to tout La Quinta “staycations” as “fun” weekend “escapes.” It’s amazing that the Texanist ever found someone to settle down with him, isn’t it? Much less a sweet-smelling West Texas gal like Mrs. Texanist.

Alas, the United States Department of State currently warns against travel to Nuevo Laredo due to the prevalence of various criminal activities, among which is kidnapping. And the Cadillac Bar has long since gone out of business. What’s more, while the Texanist still enjoys a good small-town festival, dusty or not, the thrill just isn’t what it once was for the missus. When the Texanist takes such trips these days, he does so without the company of his helpmeet. La Quinta has not been in play for a long time.

Thankfully, Texas is chock-full of other romantic settings, some of which even come with a hint of romantic international flare. So how about a trip over to gay Paris, a.k.a. “Crape Myrtle City,” in northeast Texas? Or ancient Roma, down on the border? Or, if you’re feeling a little more randy, maybe Sweet Union, south of Rusk, in Cherokee County, would suit y’all. Venus, in Johnson County, shares a name with the Roman goddess of love. You might try Loving (with a capital L), up in North Texas. Or, as Valentine’s Day is upon us, maybe Valentine, way out west. Sugar Land?

The Texanist is mostly joking. He just thought it would be fun to point out a few places within the state whose names are redolent of romance. In truth, he would only be able to vouch for a couple of these places, were he inclined to do so. But, all moderately funny dad-joking aside, Texas is actually replete with destinations suitable to your needs, be it on the sandy beaches of the Gulf Coast, among the majestic mountains of West Texas, in the sultry subtropical climes of the Big Thicket, amid the woodsy wilds of East Texas, or even up on the wide-open Llano Estacado right there in your own backyard.

In the Texanist’s humble opinion, there is no time in Texas like springtime in Texas. The weather is warming, the wildflowers begin to make their appearance, and love, like the smell of freshly cut grass, is in the air. Your timing is perfect. So how about packing light and heading south to the Big Bend area? Have you ever been to Marathon? The spectacular views are inspiring, the few folks you’ll encounter are friendly, and the White Buffalo Bar at the Gage Hotel is said to be the home of delicious ranch water, which the Texanist finds as refreshing and libido-tickling as a Ramos gin fizz. The nearby hiking options, if you’ve got the energy, ain’t bad either.

The Texanist might also suggest a trip to the lovely, laidback little seaside town of Port Aransas, where you can kick off your shoes—as well as your cares—and stroll hand-in-hand ‘neath the setting sun as the shore break laps ticklishly onto your bare piggies. And then you can go out and gorge yourselves on fresh-caught fruits of the sea, and trip the light fantastic at a salty dive bar where, perhaps, mezcal body shots are a thing. Maybe a trip to the big city would suit you? There’s Houston for art; San Antonio for a little Texas history and, if you’re so inclined, a lot of Riverwalk debauchery; Dallas for thoughtful introspection and people watching; and Austin for live musical entertainment, hipster watching, and watery recreation on one of the area lakes or in the life-affirming chilliness of natural-bottom Barton Springs pool. You know, Lyndon and Lady Bird had their first date at the Driskill Hotel in Austin.

Or how about a real change of scenery for you Midlanders, with a trip to East Texas? There are lots of tall, tall trees out that way, you know. And lots of pretty lakes upon which you can fish, boat, or sit on the bank canoodling as the frogs loudly sing their evening love songs. (Noodling, or hand fishing, is also acceptable behavior along the banks of a lake or river, although it was illegal in Texas prior to 2011.) The Texanist once a had a heck of a time on beautiful Toledo Bend Reservoir, the largest lake in Texas. There’s primal Caddo Lake, a body of water so naturally beautiful, what with the giant Spanish moss-draped cypress trees, as to rival any romantic setting on earth (though the giant salvinia that has lately marred the lake is not all that romantic).

The Texanist, come to think of it, has had, ahem, some luck with a number of these spots in the past and he hopes one of them will work out for you, too. Additionally, just so you know, Midland is home to two very reasonably priced La Quintas. Good luck, love birds!