Haven’t we seen this picture before? Speaker Straus performs well for most of the session, but when crunch time comes, he can’t close the deal. His team has no cohesion (except for Geren), and there doesn’t appear to be a strategy. So Straus falls back into his old persona of presiding rather than leading. It’s happened every session he has been speaker. I wrote much the same story line a few days ago, ending with the prediction that Straus would end up putting Rick Perry in the driver’s seat. That is exactly where we are headed. Just wait and see, Perry is going to eviscerate the restoration of the education cuts.

The Senate, of course, has its own problems. It’s more cohesive than the House, but Tommy Williams has fallen back into his old House persona of losing his temper at a key moments. (In Straus’s case, it’s being in a canoe and choosing not to paddle.) Can you imagine what Bullock would say about this situation? Where are the giants when you need them? I’m not going to wax eloquent about the good old days — they weren’t so good as we might like to remember — but at least they produced leaders who could close a deal when they had to. Oh, and here’s another prediction: SB 11, the drug testing bill that caused so much drama and comedy last night in the House before being killed at midnight, will come back in the special session. What a mess! 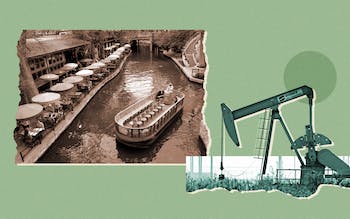