That didn’t take long. Jeb Bush is the “clear Republican frontrunner for president,” according to a new CNN/ORC poll. Bush received 23% of Republicans surveyed in the nationwide poll, ten points ahead of his nearest competitor, New Jersey governor Chris Christie, who tallied 13%. Physician Ben Carson ran third, with 7%, and Rand Paul and former Arkansas governor Mike Huckabee tied for fourth with 6%.

As I’ve written before, Jeb is going to be hard to beat. He is backed by the prodigious clout of the Bush family and their nationwide fundraising ability. No one else on the GOP wannabe list is very attractive, especially since Christie’s popularity has waned in recent months. It’s hard to envision anyone else matching Jeb’s positives as a candidate. 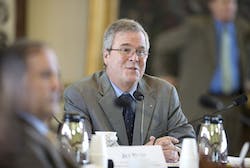