Yesterday, I did a story here on an award-winning hidden camera investigation that was done of state legislators in Tennessee by a television station. The reporter involved told me they intentionally did not use footage that would just embarrass legislators, such as one of a lawmaker propositioning one of their undercover producers for sex. He told me that they wanted to just use video that went to how lobbyists influence public policy after hours in bars and restaurants.

But in an interview with Lauren McGaughy of the Houston Chronicle, American Phoenix Foundation organizers Hannah Giles and Joesph Basel, who are married, admitted their motivation was marital infidelity by politicians – although they denied their work was either partisan or aimed at supporters of House Speaker Joe Straus. They told McGaughy that they got the idea for their investigation when Giles attended a Republican meeting of House and Senate members in Washington, D.C.

HG: They just assumed I’m like this like super conservative, like “do anything for Republicans” type person. So, I was always invited to the back rooms. So, there’s this like underground restaurant club thing Republicans frequent, members of the House and Senate. We go down there on a Tuesday night — it’s almost midnight — to this restaurant and several high-profile members of the House of Representatives were down there with women that were not their wives.

JB: There were no wives in sight.

HG: There were no wives at all. And they were just down there and we were blown away. And it was that night that we started saying that we have to – if the voter, their constituency knew what they were up to – you can’t swear on the Bible and then go cheat on your wife.

JB: The Republicans made us do it. In D.C. So, we’ve been dreaming about doing this.

JB: And our Texas videos will show that very clearly. This is systemic. 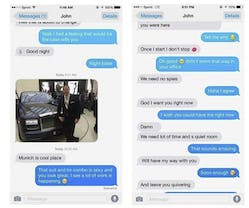