In the intimate setting of the Cactus Café at the University of Texas last week, I watched as filmmakers Paul Stekler and Miguel Alvarez discussed Postcards from the Great Divide, a PBS film series they made prior to the 2016 election that examined the sharp political split between the American people. Joining them on the stage at KUT’s Views and Brews was ABC political commentator Matthew Dowd, a pollster who once worked for conservative Democrats such as U.S. Senator Lloyd Bentsen and Lieutenant Governor Bob Bullock, and then went to work for Republican Governor George W. Bush to help him win the White House twice. 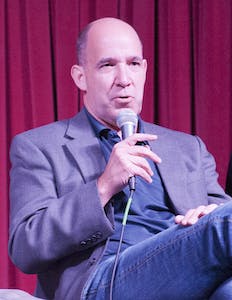 Dowd, who has now declared himself independent of either party, admitted that he, like many prognosticators, was surprised by Donald Trump’s victory over Hillary Clinton in the presidential race of last year. Dowd said the election was not a victory for either the Republican or Democratic parties, but evidence of their failure. That prompted host Rebecca McInroy to tease Dowd about a Texas Tribune story saying Dowd might run as an independent next year against U.S. Senator Ted Cruz, a Texas Republican who failed to win the GOP presidential nomination last year. Dowd, visibly embarrassed, demurred that he was not taking any action toward that end.

The discussion prompted me to follow up with Dowd to talk about Texas politics and why he believes Cruz would be vulnerable to a re-election challenge.

This conversation has been edited for clarity. You can hear the entire discussion below.

R.G. Ratcliffe: During the election, as a joke, I got a T-shirt that said “Giant Meteor 2016, Just End It Already.” But you mentioned the other night that the Democratic Party and the Republican Party were dead and didn’t know it yet. The meteor already has hit. Can you expand on that?

Matthew Dowd: What I was trying to say is the meteor already has hit, and they are dinosaurs. The two legacy parties are dinosaurs, both of which I worked for at one time. Their existence as it has been is about to go extinct. It may not be fully yet, but it’s about to go extinct. The cloud of dust is moving across. As dinosaurs they are about to go extinct, because, in my view, they don’t fit where the country is, where the state is, and where people want to go. The last place to be innovative in our country is politics and governance, and the two political parties have been dominate for over 100 years, 150 years and people want something else.

RGR: Does that come about in a restructuring of the current parties or does it come about with a new party?

MD: There’s two avenues of change happening. One is one organization or both organizations evolving on their own. I think that’s unlikely, because without pressure and in a system that rewards the binary choice that’s unlikely. The more likely, and it’s what’s happening in nearly every single innovation that’s occurred in the last fifty years, is that there is a movement of people who don’t want to be a part of either of those two organizations that begin to run as independents. It starts as people. It doesn’t start as a party. It starts as people starting to run outside of the system. Then eventually it forms into something, an organization, a confederacy, and maybe a party. Fundamentally, if you look at the cab industry, the hotel industry, the book industry, everything, normally change occurs because upstarts come into the marketplace and disrupt the system.

RGR: Over history we’ve had the Populist Party, the Progressive Party, Ross Perot’s Reform Party. They all start with a rush and then peter out.

MD: Here’s the mistake that has always been made in the independent or third-party movement in our country—it’s always been top down, or almost always top down. Somebody said I want to run this person as president, or I want to form this independent group out of Washington or somewhere else. That never works. It never works in democracy to impose democracy from the top down. It will grow from the grassroots and the bottom up.

RGR: Look at Texas, the Republican Party has had complete control of the state government since 2003. What would prompt change?

MD: It’s already being prompted. Texas is a political monopoly. It’s dominated by Republicans. In a monopoly there is inefficiency and sometimes corruption. We’re seeing inefficiency in the system, the inability of new ideas to come into the system because of the monopoly. What exists in Texas today is a huge group of disenfranchised voters. Those voters are one, Democrats, who hold no power and there’s no prospects of them holding power at a statewide level in Texas for years to come. There’s independents who don’t participate in either party’s primary because they don’t feel like they fit them. Then there’s a group of Republicans, I would guess around 25 percent or a third, who are Republican but don’t necessarily like the direction that some of the policies or some of the leadership has taken but they don’t have an avenue.

RGR: Tell me about the rumors that you might challenge the re-election of U.S. Senator Ted Cruz next year.

MD: It is a rumor. As you know, I was asked about this by another publication, and I told them a number of folks, friends of mine—as I’d been involved in politics in Texas on both sides of the aisle—both Democrats, Republicans, and independents have come to me and asked me if I would think about it or consider it because they know I’m an independent, and they know I’m frustrated at the system. They know I love the state and love politics and have ever since I was a teenager. So told them, as I told the Texas Tribune, I was going to give it some thought. I haven’t done anything, haven’t made a single move, having organized anything, haven’t formed a committee. But I said I would at least be thoughtful about it. I want to figure out what’s the best way to use my voice in a system to bring about change.

RGR: Why is Cruz vulnerable in a state like Texas?

MD: It’s timely for something new to arise in the state because of the monopoly. I think most voters in the state are fiscally responsible and socially tolerant, which doesn’t fit most of the Republicans in the state. Ted’s obviously not that way. When you look at Ted and his ersatz race for president, Texas really right now only has one United States senator. Ted had to spend more time outside of Texas campaigning in Iowa and giving speeches in Washington than has actually in doing things on behalf of the state.

One, I think it’s timely, even taking Ted out of the equation. But two, I think Ted has uniquely positioned himself as someone who has become part of the problem in Washington, where they have a lot of talk and not much action and aren’t humble servant leaders. So with that combination Ted is vulnerable.

There’s an opportunity for somebody to run him. But I do believe you can’t beat him with a Democrat. A Democrat can’t win because of the problems in the state with the Democratic brand and organization and all that, and it’s very difficult to beat Ted in the Republican primary. If there is an opportunity, the only opportunity is running as an independent.