During my care-free years in college, I owned a single-action, western style .357 magnum revolver that my buddies and I would take to the bluffs overlooking the Missouri River. We’d sit, talk about the past, dream about the future and take potshots at whatever happened to float downstream. We were more likely to create geysers of water than to hit anything in the fast-flowing wide Missouri. Plinking with firearms was something I’d grown up with in the fields and streams on the outskirts of Dallas. As boys, we had BB guns, and then as teenagers we had more adult firearms. We shot tin cans along a railroad track, and once did battle with a v-formation of water snakes coming down the creek. Those days always come back to me whenever I hear John Prine’s song about a childhood of hunting pop bottles along the Green River in Muhlenberg County, Kentucky.

Those fields of my youth are gone, replaced by tract housing and apartments north of the Addison Airport, and many of the creeks where we splashed as boys are just concrete culverts. But despite all the times I went plinking when young, I’ve never felt so threatened as an adult to think it was necessary to carry a handgun for self-defense. I’m not going to argue the merits or demerits of carrying pistols, open or concealed, because there are enough standard bearers on both sides of that issue to knee-jerk it to death. I merely want to point out that the sales job for the open carry of handguns is something of a misunderstood and misleading bill of goods.

First, there is a great deal of misunderstanding about exactly what open carry means, because there are two types.

One is to grant the privilege of openly carrying a handgun to those people who have gone through training and criminal background checks to obtain a concealed handgun permit from the Texas Department of Public Safety. The second version is called “constitutional carry” by its advocates and essentially allows anyone who can legally own a handgun to carry the firearm openly. Bills relating to carrying handguns on college campuses and open carry with concealed handgun permits are scheduled for a hearing in the Senate State Affairs Committee on Thursday, and although no constitutional carry legislation is before the committee, witnesses likely will bring up the topic.

Probably the biggest misleading fact thrown out by the advocates of open carry is that Texas is some sort of laggard among the states in allowing handgun owners to openly carry their firearm. Governor Greg Abbott has said repeatedly that 43 states have some form of open carry laws and once declared, “If open carry is good enough for Massachusetts, it’s good enough for the state of Texas.” While Massachusetts might technically be called an open carry state, like many states there are numerous restrictions that make gun ownership far more restrictive than Texas advocates would admit, and Massachusetts just last year added additional restrictions to its laws.

Essentially, to openly carry a handgun in Massachusetts, a gun owner has to have a permit from a local police chief, and gun owners find it more difficult to get such permits the closer they come to major urban areas. The national advocacy group OpenCarry.org describes Massachusetts this way: “Massachusetts is not a traditional open carry state, but it is not a crime for Class A License holders to open carry. However, it is reported that some jurisdictions will use this as an excuse to revoke permits.”

Another example: at least one map floating around the Texas Capitol shows Arkansas as an Open Carry state, but the OpenCarry.Org declares that “Arkansas is not a traditional open carry state.” State law allows someone to openly carry a handgun, but only if they are on a journey leaving their home county. A state law in 2013 decriminalized open carry so long as someone did not intend to use the firearm to commit a crime; however, the state attorney general, in a legally binding opinion, said open carry is only allowed in a person’s vehicle while on a journey.

And while the permitted carrying of handguns has gained some traction around the country, the so-called constitutional carry does not seem to be gaining much ground. The only states that clearly have constitutional carry are Alaska, Arizona, Vermont and Wyoming. Idaho, Montana, New Hampshire and New Mexico allow constitutional carry but with restrictions. For instance, Montana only allows open without a permit outside of city limits.

Meanwhile, Missouri last year overturned a gubernatorial veto to make open carry legal for persons with concealed handgun permits. Alabama and Mississippi passed open carry legislation in 2013, but only for those persons with state issued licenses. Oklahoma passed a permitted open carry law in 2012, but constitutional carry remains illegal. Louisiana allows the open carry of handguns, with or without a permit, but anyone who carries a firearm without a concealed handgun license within 1,000 feet of a school is subject to a $1,000 fine and imprisonment up to six months.

A similar zone exists under the federal Gun-Free School Zone Act signed into law by President George H.W. Bush in 1990: carrying a firearm into a school zone carries a fine of $5,000 and five years in prison, unless a person has a firearm permit issued by their home state. The federal law, that is, does not recognize state reciprocity for handgun permits. If you want to get an idea of what a 1,000 foot ban would mean to constitutional carry, take a look at this Google map of schools in Dallas; each red dot is a school. And if you want to try to wade through the confusing mass of state handgun laws, I’d recommend going to both OpenCarry.org and The Law Center to Prevent Gun Violence.

As the debate moves forward on open carry in Texas this legislative session, just remember the handgun laws of other states are not as simple and clear-cut as the handgun advocates would claim. And just as some states are relaxing firearms regulations, others are tightening them up. Just two days after the Texas House voted to authorize “panic buttons” in legislative offices because of a confrontation between a lawmaker and constitutional carry advocate Kory Watkins, the Washington State Senate decided to ban firearms from its gallery. 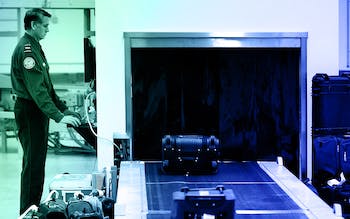