Beyond here there be dragons, or at least the most interesting articles I’ve read this week by other writers.

“And Cut!” A threat to Texas film and TV incentives

By: Danny Gallagher
From: Dallas Observer
Synopsis: The Texas Moving Image Industry Incentive Program, which lures production into Texas with tax rebates, is once again the cross-hairs of culture conservatives in the Legislature.

“It changed the way the game was played,” says Janice Burkland, the director of the Dallas Film Commission. “Everything became incentives first and location, equipment and crew second and third.”

But not everyone who has moved into the offices of the Texas State Capitol sees the program the same way. Last year, legislators cut the program’s funding by two-thirds and just recently, three bills were introduced that would dismantle the program.

According to this story, there are three bills to eliminate the program, filed by Republicans Senators Robert Hall of Edgewood, Konni Burton of Colleyville and Rep. Matt Shaheen of Plano.

By: Justice Don Willett
From: The Wall Street Journal
Synopsis: They called him the “tweetingest judge in America,” but the Wall Street Journal also gave Texas Supreme Court Justice Don Willett 630 words instead of 140 characters to describe his life as a judge and a father. His tweets helped earn him a spot on the list of potential U.S. Supreme Court nominees given to President-elect Donald Trump, albeit, at the end of the list. Willett, however, tweets prolifically and without the smash-mouth bravado of the incoming president. Here’s a taste of his article:

“I’m metabolically hard-wired for cloistered Supreme Court life, relishing what Oliver Wendell Holmes Jr. called “the secret joy of isolated thought.” I write a lot, and rewrite even more. When writing, I split my time between my chambers and my satellite office: my neighborhood Chick-fil-A. It offers the word-nerd trifecta: I bring Bose headphones; they provide Wi-Fi and waffle fries.”

Probably the most endearing part of the article was his description of the transient nature of parenthood.

Affluence Equals an A

By: Eva-Marie Avala and Holly Hacker
From: The Dallas Morning News
Synopsis: Without going too deep into the Dallas Morning News story on the controversial public school A-F grading plan, there’s a chart in there well worth noting. The chart is interactive at the DMN web site. 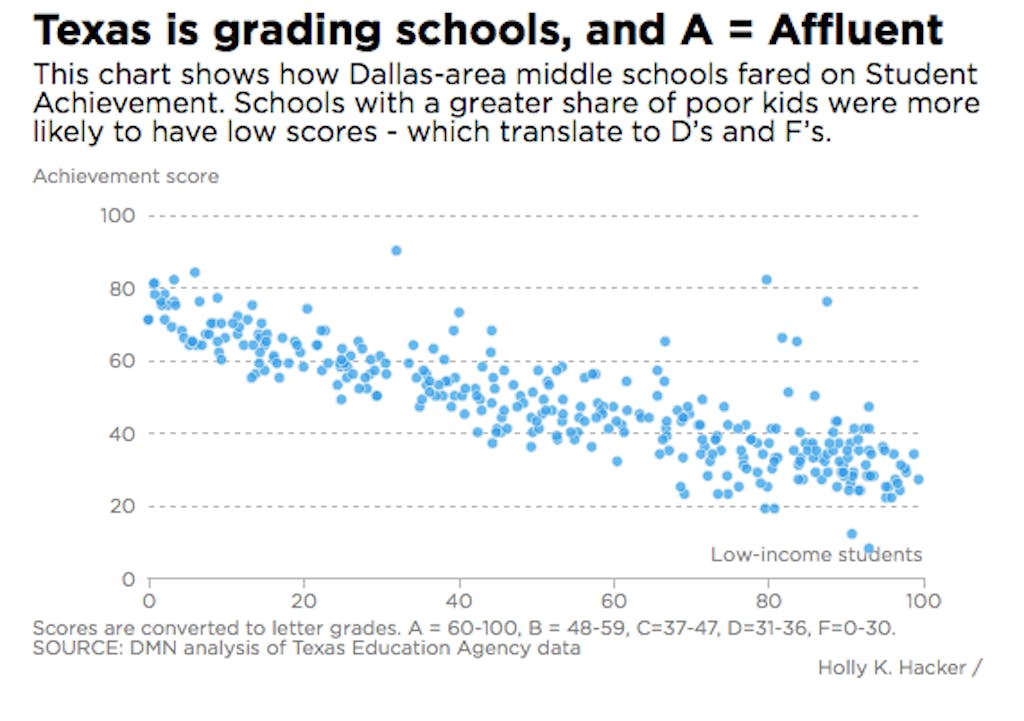 Not terribly surprising, schools with more affluent children do better in school rating systems. Expect to see this chart again this session. The public school advocates will use it to show why more money is needed for schools. The private school voucher advocates will use it to prove students shouldn’t be trapped in a failing school just because of the geography of their home. (Disclosure: My wife works at the Texas Education Agency.)

By: Joe Holley
From: Houston Chronicle
Synopsis: The Good Book says there is nothing new under the sun, and Joe Holly reminds us of a former Texas governor who swept into office with a campaign based on the Ten Commandments and the Golden Rule. W. Lee “Pappy” O’Daniel was the flour salesman/entertainer turned politician.

Crisscrossing the state in a white bus, O’Daniel railed against “the professional politicians.” With his wife, Merle, and their grown children on board, he and his hillbilly band drew massive crowds in towns large and small. He scribbled a song to showcase his campaign centerpiece, a $30-a-month pension for all Texans over 65. The author of “Thirty Bucks for Momma” polled more than 573,000 primary votes, Thompson 231,000. Even with 13 candidates in the field, he avoided a runoff with 51.4 percent of the vote.

As governor, O’Daniel abandoned his populist promises like weevil-ridden flour. He unveiled a tax plan, secretly written by his oil-industry allies and the state’s largest corporations, that amounted to a burdensome sales tax on the rural and working-class Texans who idolized him. He tried to appoint to key positions either reactionaries or men with no experience in the areas they were to oversee. His pension plan fizzled, mainly because it would cost four times the entire state budget.

So next week, after Donald Trump takes the oath of office as president, will be all be saying Pass the Biscuits Donnie.