In the years before the Civil War, U.S. Senator Sam Houston and future president Abraham Lincoln each delivered famous speeches on the politics of slavery, and both drew on the Book of Mark to make a point about how slavery politics threatened the experiment of democracy: “A house divided against itself cannot stand.”

Our latter day divisions grew out of the Iraq war and economic turmoil. First it was the tea party, and now it is “The Resistance” to President Trump. Both have had legitimate policy positions and complaints, but they also have engaged in rhetorical assaults on their fellow Americans. As Pogo the Possum said in a Sunday comic forty-five years ago: “We have met the enemy and he is us.”

In presenting today’s selection of stories, ask yourself: Can our house stand in an age of hyper partisanship?

Sure there are a lot of reasons for Democrats and liberals to be frustrated with the new Trump Administration, but keep in mind: Donald Trump since June 2015 has never had a personal positive rating. This article asks whether liberal anger is driving away moderates who might be allies were it not for the purity test that many on the left are demanding:

Mr. Medford should be a natural ally for liberals trying to convince the country that Mr. Trump was a bad choice. But it is not working out that way. Every time Mr. Medford dips into the political debate — either with strangers on Facebook or friends in New York and Los Angeles — he comes away feeling battered by contempt and an attitude of moral superiority.

“We’re backed into a corner,” said Mr. Medford, 46, whose business teaches people to be filmmakers. “There are at least some things about Trump I find to be defensible. But they are saying: ‘Agree with us 100 percent or you are morally bankrupt. You’re an idiot if you support any part of Trump.’ ”

As you look around the nation, many of the citizen demands for town hall meetings with Republican leaders feel a bit like the Regulator-Moderator War of East Texas during the days of the Republic—only without the killings. OK, sheriff, send out the congressman.

Well, maybe Democrats and liberals are not the only ones drawing lines in the sand. Mitch McConnell’s quote in this Los Angeles Times piece does not speak to unifying the nation:

“Winners make policy and losers go home,” a taunting Mitch McConnell, the Republican Senate leader, told an invitation-only gathering in his home state of Kentucky, as about 1,000 protesters gathered outside.

The town hall meeting, a throwback to a time of more intimate connection, has become a political organizing tool in the social media age — a piece of performance theater and a worldwide stage.

Obamacare, immigration, environmental regulation, Social Security, Russian meddling in the 2016 election and Trump, Trump, Trump — all poured forth this week in the form of questions, loudly and heatedly.

Texas Democrats may not be able to carry the state in an election, but they certainly are adding their voices to the national push-back. Protesters in Austin and Houston have been particularly noteworthy.

With a focus on U.S. House members John Culberson of Houston and Kevin Brady of The Woodlands, the Houston Chronicle reported from some of its local protests. Culberson is a target of Democrats because Hillary Clinton carried his district even as Culberson won re-election against an opponent who had neither sufficient money nor party infrastructure behind him—a missed opportunity for Democrats. Culberson is meeting with constituents, just not the ones protesting. The protestors are motivated, though:

Courtney Myers, a preschool teacher in The Woodlands, said there is plenty of homegrown dissent in Texas, even if “we’re tiny blue dots in a big red state.” Myers was part of a group that went to Brady’s district office Tuesday to invite him to another town hall meeting this weekend on health care, education and immigration. She acknowledged that some of the videos she has seen of recent town halls around the country “do look scary,” but said she is not looking for confrontation. “We just want it to be a successful conversation.”

More than a few articles have noted that many incumbent Republicans around the nation were elected amid the tea party protests of 2009 after the Affordable Care Act—AKA Obamacare—was passed. So while these are not reads from this week, I thought it might be good to take a look back to remind us from whence we came.

At times, during the right-wing protests against health care reform in 2009, there seemed to be more focus on the shouting than the substance of the complaints. But then, what journalist could resist using a quote like, “Become a part of the mob!”

A volatile mix has resulted. In Mehlville, Mo., St. Louis County police officers arrested six people on Thursday evening, some on assault charges, outside a health care and aging forum organized by Representative Russ Carnahan, a Democrat. Opponents of the proposed changes, organized by the St. Louis Tea Party, apparently clashed with supporters organized by the Service Employees International Union outside a school gym.

If you need any other evidence of why Republican members of Congress are avoiding the left-leaning demands to hold town hall meetings, consider this 2009 story from Politico. This kind of atmosphere is not about hearing about citizen complaints. It’s about showing up to be shouted down.

Screaming constituents, protesters dragged out by the cops, congressmen fearful for their safety — welcome to the new town-hall-style meeting, the once-staid forum that is rapidly turning into a house of horrors for members of Congress.

On the eve of the August recess, members are reporting meetings that have gone terribly awry, marked by angry, sign-carrying mobs and disruptive behavior. In at least one case, a congressman has stopped holding town hall events because the situation has spiraled so far out of control.

The news of the week that has potential repercussions beyond the nation’s immediate politics was President Trump’s declaration that the news media is an enemy of the people. 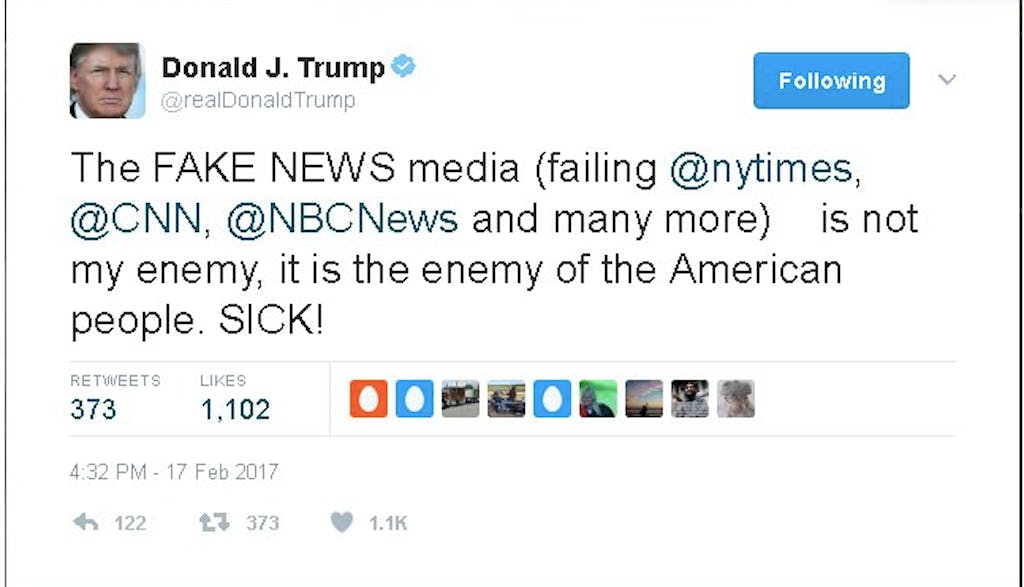 Trump doubled down on his tweet today during a speech to the Conservative Political Action Committee conference in Washington. Shortly afterward, his office barred CNN, The New York Times, Politico and the Los Angeles Times from attending a media briefing.

“I want you all to know that we are fighting the fake news,” Trump told attendees.

The nation’s founding fathers thought an aggressive news media, then known as the free press, was an important factor in protecting democracy and freedom.

“The only security of all is in a free press. The force of public opinion cannot be resisted when permitted freely to be expressed. The agitation it produces must be submitted to. It is necessary, to keep the waters pure.” That’s what Thomas Jefferson wrote in 1823. And he was a man whom the free press of his day did not treat kindly.

“A popular Government without popular information, or the means of acquiring it, is but a Prologue to a Farce or a Tragedy, or perhaps both,” wrote James Madison, author of the First Amendment.

There were many defenses of the news media published since Trump’s tweet, but this one from The Dallas Morning News was among the best:

Some enemies are adopted. Some adopt dogs. Many wear glasses. Enemies of the people are now engaged in an office weight-loss challenge.

Although not a news story, I don’t know how I can finish this string without pointing out the words of the man who organized the raid that killed Osama bin Laden, a real enemy of the American people. University of Texas System Chancellor Bill McRaven spoke to aspiring journalists at the communications school and called Trump’s statement “the greatest threat to democracy in my lifetime.” See his full speech in the video below.

The comments section is open. Use your First Amendment rights.