Self-appointed fiscal watchdog Michael Quinn Sullivan blasted legislators  yesterday (9/23) for a spending program that allows the state to attract and subsidize Hollywood filmmakers who wish to make movies in Texas. I find myself in rare agreement with Mr. Sullivan on this point. When I wrote a story about cutting the budget last October, I zeroed out the Film Commission. Sullivan based his post on the Empower Texans web site on a Wall Street Journal story. Here is the lead for his article: While other states have come to their senses about subsidizing Hollywood, Texas’ lawmakers continue pumping taxpayer cash into a scheme of dubious value to Texans and our economy. The Wall Street Journal reports today that states are halting the subsidies as they find footing the bill for films isn’t as glamorous as the latte-liberals in the film industry would have us all believe. There is one problem with Sullivan’s analysis. Film subsidies in Texas, while they are included in the state budget that lawmakers vote on, are not really proposed by the Legislature. They are one of several spending programs designated as “trusteed programs” in the Governor’s office. In other words, the subsidies come from Rick Perry’s office, not from general revenue or other funds controlled by the Legislature. If they represent foolish and wasteful spending, as Mr. Sullivan and I believe, the responsible party is Governor Perry–not the Legislature, which rubber-stamps this and other trusteed programs (the Enterprise Fund and the Emerging Technology Fund, among others). Blaming the Legislature is devious and flat wrong. The buck stops with Rick Perry. But Mr. Sullivan wouldn’t dare to criticize Perry, for whom he shills on command. He wants to preserve the image of a spendthrift legislature, which has no basis in reality. 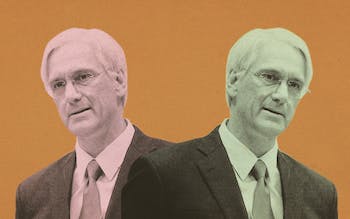