State Senator Konni Burton isn’t exactly a lefty elitist. In fact, the faith-based Republican from Colleyville won office with the help of the Northeast Tarrant County Tea Party. But this weekend she warned fellow conservatives to not just buy into the Trump Administration as a mindless embrace of Republican politics.

In response to White House Press Secretary Sean Spicer’s tirade against the news media over the number of people who attended Donald Trump’s inaugural, Burton wrote: “Y’all Spicer made refutable claims in that press conference. If you’re on the right don’t just go to ur corner & defend the indefensible.” 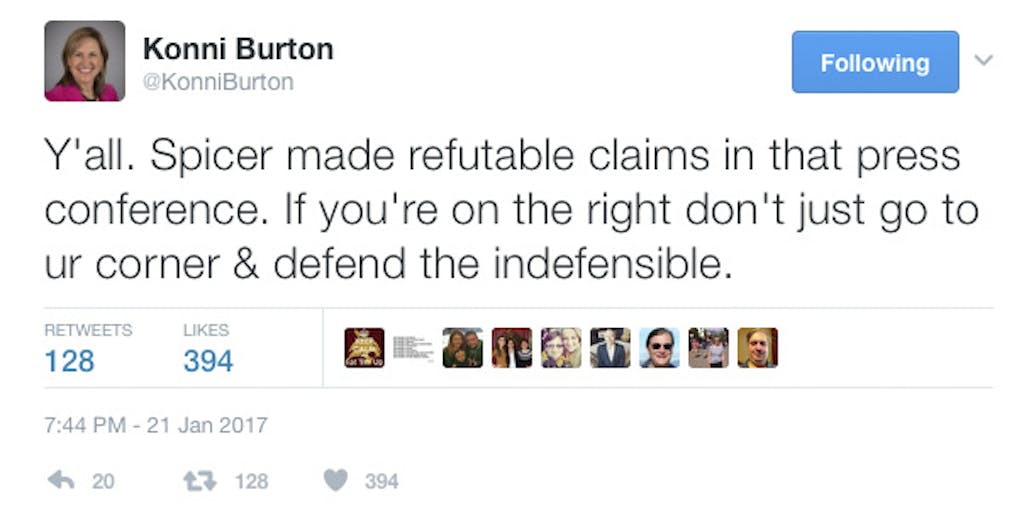 She also re-tweeted someone else’s post that said: “I call this ‘The Bannon Effect’, where you hate something so much, you become exactly like it to fight it.” Burton, who hasn’t been shy about criticizing Trump, wrote in reply, “This is so true. It’s something I’ve seen and thus realized myself.”

Spicer’s news conference was so far off base that a Washington Post headline read: Sean Spicer held a press conference. He didn’t take questions. Or tell the whole truth. The main issue was news media photos comparing the size of the Trump inauguration crowd with that of President Obama’s first inaugural. In the Obama photo, the National Mall is jammed with people, but not for the Trump swearing-in. The comparison was made because Trump claimed to have the largest crowd ever. “Photographs of the inaugural proceedings were intentionally framed in a way, in one particular tweet, to minimize the enormous support that had gathered on the National Mall.” Spicer also complained about an erroneous pool report from a Time reporter stating that Martin Luther King’s bust had been removed from the Oval Office when it had not been. The error was quickly corrected, but Spicer wouldn’t let it go. “Some members of the media were engaged in deliberately false reporting,” he said. “This was irresponsible and reckless.”

Burton also had some words for the media. She wrote the media should have done “fact checking” before reporting the MLK bust story. She also ripped reporting on the Women’s Marches that occurred around the country on Saturday. The Women’s March was about women’s rights to control their own bodies and reproduction, opposition to Trump’s Administration, and an outcry against misogyny that was promoted during the campaign against Democrat Hillary Clinton. The size of the Women’s Marches was notable, not only around the country but internationally. An estimated 7,000 people marched in Dallas, and an estimated 5,000 to 6,000 people were at the Tarrant County Courthouse in Fort Worth. Another 50,000 people jammed the streets of downtown Austin. KHOU reported that 20,000 marched in Houston.

But Burton, an opponent of abortion, criticized organizers of the Women’s March on Washington for ejecting a feminist group that opposes abortion and claimed a media “#narrative” denigrated people who oppose abortion by calling them “anti-abortion” instead of “pro-life.” She retweeted a woman who observed, “Women’s March has 200,000 people? Media slobber. March for Life has 650,000 people? Media yawn. This is why the right hates the media.”