Yesterday, I wrote that in the wake of the New Hampshire primary, there are three Republicans who can plausibly argue that they are the party’s best available alternative to Donald Trump and Ted Cruz: Jeb Bush, John Kasich, and Marco Rubio.

By that I meant two things. Any of the three can fairly assert, in their fundraising emails, that they are the most likely to beat the other two. And any of the three can make a reasonable argument that, of all the Republicans running, they would be the best nominee. Since we won’t know for a while which of the three will be the alternative, I figured I’d weigh in on which one should be. The evidence points in one direction. Jeb!

As far as being equipped to fight this out over the long haul, Bush clearly has the edge over Kasich and Rubio. His obvious advantages, in money and connections, are so staggering that I’m inclined to hold them against him, as a matter of principle. But so are many Americans, I think. And thus far, Bush hasn’t been able to leverage his material assets for political gain. He finished in fourth place in New Hampshire, just a hair behind Cruz. The numbers, when crunched, revealed that his campaign had effectively spent $1,200 per vote, and Cruz’s had spent just $18.

The result is that Bush has been, in one sense, a genuine underdog. Rubio was savaged for his glitch in the most recent debate, but prior to that, he was graded on a curve. Most of the party establishment, and the media, heralded his third-place finish in Iowa as if it was a win. And he finished in third place in Iowa thanks in part to extensive support from the establishment, and blatantly preferential treatment in most of the mainstream press. Kasich, meanwhile, is the beneficiary of what George W. Bush used to call the soft bigotry of low expectations. Objectively speaking, his performance in New Hampshire wasn’t all that amazing. After making it clear that he would stake his candidacy on the state, and spending most of his time and money there, he came in second place, with half as much support as the winner. But no one was expecting Kasich to do that well a week ago, and so all observers were impressed.

Bush, by contrast, has been held to a punitively high standard. Think about everything Trump has said during the course of this campaign. Trump is a draft dodger who casually maligned John McCain, a veteran of the war he dodged, a man whose commitment to public service survived seven years as a prisoner of war, on the basis that, as someone who spent the Vietnam War in the shelter of his unearned privilege, he prefers “guys who don’t get captured.” Remember the tut-tutting Trump received over that incident, or all the subsequent ones? Compare those comparatively subdued reactions to the widespread derision directed at Bush for a self-effacing joke he made to underline his proposal that the president should work for a more peaceful world. The comparison is insane. It raises real questions about who we are as a country. And it says something about Bush. Like Kasich and Rubio, he’s persevering despite the long odds. Unlike either of those two, he’s spent months under adverse conditions that go beyond the general absurdity of the 2016 elections. Any president can expect to encounter ruthless scrutiny and disproportionate scorn. Bush, evidently, can handle it; that will serve him well in the months to come.

If you think about what the American electorate seems to be looking for this year, Bush’s credentials are stronger than one would think. More than half of the votes cast in Iowa and New Hampshire have gone to Trump, Sanders, or Ted Cruz. There’s surely a common denominator among those three candidates. We can rule out experience: Sanders has a ton, Cruz has some, and Trump has none. We can rule out ideology: Trump’s is mutable, Cruz’s is elusive, and Sanders’ is unpopular.

The answer to this riddle may be hiding in plain sight. In the past few years I’ve heard people say Washington is broken, or something along those lines, so often that it seems like static. But the success of Sanders, Trump, and Cruz, I think, suggests that it’s more than that. All three are campaigning on a promise to take on the status quo. And that’s a promise their supporters find credible, albeit for very different reasons. Sanders has integrity. He’s spent decades describing himself, in public, as a socialist, despite the fact that he could derive no conceivable benefit from doing so. Trump has no integrity whatsoever: his signature credential is his willingness to fight the scourge of political correctness, and yet he won’t even take credit for calling Cruz a “pussy.” What Trump has is an alibi: thanks to his father, he has more wealth and power than he can even use, regardless of whether he becomes president. Cruz, meanwhile, is so clearly running for president that he’s been accused of “careerism.” But he does have a record of fighting the powers that be, as his many critics in Congress are more than happy to confirm.

Bush, obviously, is the opposite of an outsider. There’s no indication that he empathizes with these jacobins. What’s odd is that he can claim all three credentials. He’s an unapologetic supporter of amnesty, whether the question concerns unauthorized immigrants or curricular standards; those stances are so politically thankless that Sanders would approve. Like Trump, Bush has an alibi: he’s Jeb Bush. At any given moment he can adjust his monocle, and retreat to Bush Manor. Like Cruz, he’s antagonized the Republican establishment: while Cruz was mischiefing his onetime boss as solicitor general of Texas, Jeb was refusing to go along with his brother’s plans to bring offshore drilling to Florida.

Moreover, Bush obviously doesn’t kowtow to the lamestream media. That is, presumably, why he and his campaign have wholly failed to convey any of these aspects of his record to the American public. And as Cruz reminded us after the Iowa caucus, the media don’t choose the winners; that’s a lucky break for Bush, because we would have already coalesced around Rubio. But if the establishment GOP subset of We the People opts for Bush instead, I suspect they won’t be disappointed. 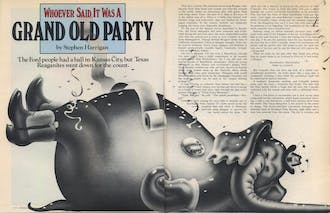 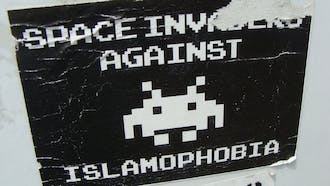 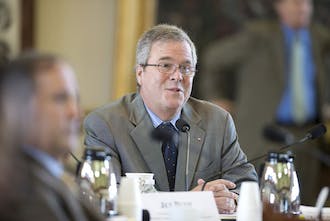