NORMA CHAVEZ vs. NAOMI GONZALEZ (El Paso) [revised] This is the only runoff on the Democratic side. It has become a proxy fight between TLR and the Trials, like the Rios Ybarra-Lozano race. Chavez is attacking Gonzalez for taking money from Texans for Lawsuit Reform — some 88% of her $192,000 in contributions, according to the El Paso Times. (Chavez received $108,000 from the Trial Lawyers.) I had a phone conversation today with an astute political operative in El Paso who said, flatly, “Norma is not going to win this race.” For one thing, no incumbent has won a runoff here since 2001. Then too, some folks are mad that she got her degree at UT instead of UTEP. Some of her supporters acted like thugs at a recent forum. She may have boasted too much about her insider status in Austin, and her relationship with lobbyists there. Her ground game may not be as strong as it used to be. Little things ultimately add up to a big thing that was the end of this writeup yesterday: If Chavez has a problem, it’s that she has made too many enemies. DELWIN JONES vs. CHARLES PERRY (Lubbock) Perry made an unexpected late charge to close within a few points of Jones on March 2. Zach Brady finished third. This district includes four rural counties as well as part of Lubbock, and Brady was able to make inroads into ag communities where Jones has always run well, garnering endorsements from the Texas Ginners’ Association, Texas and Southwestern Cattle Raisers Association, Texas Forestry Association, and the Texas Cattle Feeders Association. The likelihood is that the ag voters will return to Jones in the runoff; Perry’s support is mostly from the city. Brady has said that he “supports” Jones, and that he “recommends” Jones, but he hasn’t used the e-word yet. It is possible, but far from certain, that senators Duncan and Seliger will come out for Jones as well. Perry has been embarrassed by charges that he accepted a corporate contribution, which is illegal in Texas. The case for Perry is that Lubbock is the bailiwick of home school advocate Tim Lambert, and runoff turnout is often dominated by ideological voters. This district had a huge turnout on primary day — 25,000 votes — and will probably have another big showing for the runoff. It looks to me as if Jones will pull this one out. MARK GRIFFIN vs. JOHN FRULLO (Lubbock) This is an open seat created by the retirement of Carl Isett. Griffin is the Perry appointee to the Texas Tech board of regents who left the board under duress after having the temerity to say nice things about Kay Bailey Hutchison. Isett is backing Frullo big-time, having given him $30,000 from his own campaign treasury. Griffin had 51.3% of the early vote, but Frullo won on election day to trim the margin to 48-43. A third candidate forced the runoff. Frullo has the support of conservative talk radio in Lubbock (as does Charles Perry). The race looks like a tossup to me. MABRIE JACKSON vs. VAN TAYLOR (Plano) Taylor is the Flying Dutchman of Texas politics, always searching for a safe harbor for his political ambitions. First he showed up in Waco to run against Chet Edwards for Congress, then he moved to Collin County in the hope that Ralph Hall or Sam Johnson would elect to retire. When neither did, he entered the race for the open seat created by Brian McCall’s retirement in this Plano district. The Jackson camp has accused Taylor of resume fraud and labeled him “Moving Van” Taylor. Taylor reports outstanding loans of $420,000 and has spent a small fortune on the race. Jackson has deep roots in the community, and she led Taylor on primary day by more than a thousand votes. Edge to Jackson. DAN HUBERTY vs. DR. SUSAN CURLING (Humble/Kingwood) Huberty had a huge lead going into the runoff of almost 30 points. He also has the backing of state senators Tommy Williams and Dan Patrick. Curling has attacked Huberty over the vote to award a contract to Steep Creek Media, saying he had a conflict of interest because his wife worked for the company. The attack fizzled because the position was unpaid. Huberty, who has ties to Boone Pickens, countered that Curling had contributed to Democratic congressman Gene Green. Curling’s only hope in this race is support from the Kingwood area, where most of the votes are. I don’t think that’s enough. [Note to readers: The controversy over the role of Huberty’s wife was the subject of the first comment about this post. Following that comment, I have published the article in the Quorum Report about this controversy, which was reprinted by permission in the Kingwood Observer.] Two other races will determine the Republican candidates against incumbent Democrats. In Williamson County, where Diana Maldonado has established a Democratic beachhead in a red county, the race for the Republican nomination to oppose her is between John Gordon, a longtime Republican stalwart in the district, and Larry Gonzalez, a Capitol insider, who received $90,000 in contributions from homebuilder Bob Perry. (Perry also made a large contribution to Victor Leal, a candidate for the seat vacated by David Swinford. Perry gets his share of criticism, but may be the only Republican in Texas who is trying to do something about bringing Hispanics into the GOP.) It will be interesting to see if the Victor Carrillo effect hurts Gonzalez. Gordon held a slight lead going into the runoff. The other race is in Travis County for the right to face Democrat Valinda Bolton. Paul Workman led Holly White Hunter going into the runoff. Workman has charged Hunter with being a carpetbagger who moved into the district to run for office. She has charged that Workman contributed to Democrats, including former speaker Pete Laney and state senator Kirk Watson. This may be one of those races where Workman’s deeper roots in the district turn out to be decisive. 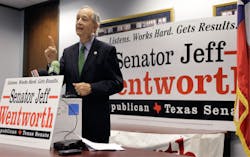