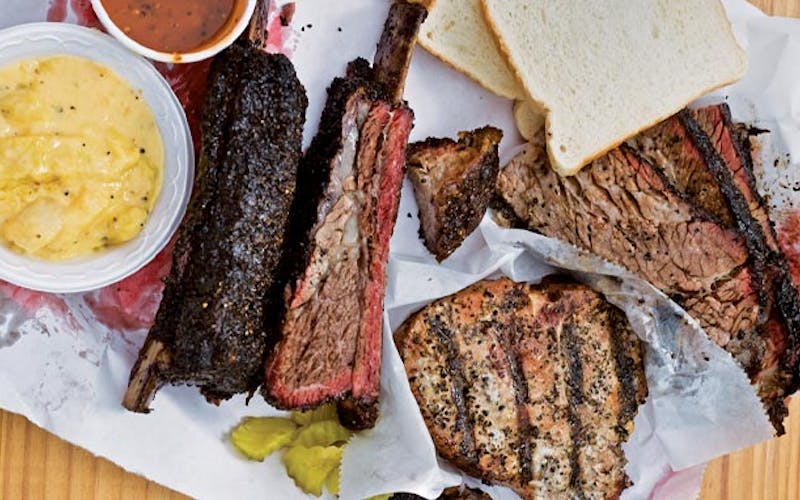 Texas barbecue, the classic version of which is found primarily in Central Texas and distinguished by its use of beef brisket and its indirect smoking method, is superior to all other regional varieties of barbecue. This is an incontrovertible fact. However, the state boasts tremendous variety of barbecue styles, from the cabrito pits of South Texas to the sweet tangy ribs of East Texas. Over the years, Texas Monthly has written about them all. In our first barbecue story, “The World’s Best Barbecue is in Taylor, Texas. Or is it Lockhart?” Griffin Smith Jr. wrote that, “at first blush, the East Texas chopped pork sandwich with hot sauce has little in common with the slab of Central Texas beef. . . . The emphasis in Central Texas is overwhelmingly on the meat itself—sauce, if available at all, is usually just a side dip.”

Central Texas barbecue owes its origins to the meat markets and grocery stores opened in the 1800s by German and Czech immigrants, who brought with them a style of smoking meat over wood with a simple preparation of salt and pepper. “Whatever fresh meat they couldn’t sell, they would smoke and sell as ‘barbecue,’” Katy Vine wrote in her 2012 story “Of Meat and Men.” “As demand grew, the markets evolved into barbecue joints, though the style of service didn’t change much. The meat was still sliced in front of the customer in line and served on butcher paper.”

The most famous of these meat markets became part of a canon—Louie Mueller’s in Taylor, Kreuz Market and Black’s in Lockhart, and City Market in Luling. The late 1990s brought on a subtle change to this lineup. After Kreuz Market’s owner, Edgar “Smitty” Schmidt died, the siblings who inherited the business parted ways. As a result, Kreuz Market moved to another part of town and the original building became Smitty’s. It made the “Best of the Best” barbecue in Texas Monthly’s 2003 round-up (the first in a series supervised by food editor Patricia Sharpe).

The front-runners had become so familiar that when the Texas Monthly staff hit the ground in 2008, for another “Top 50” review of barbecue joints, they were surprised by a completely unknown newcomer: Snow’s BBQ, in Lexington, “a small restaurant open only on Saturdays and only from eight in the morning until whenever the meat runs out, usually around noon.” A year later, in Austin, a little trailer called Franklin BBQ opened, causing such a fever that by the time it opened a brick-and-mortar restaurant in the spring of 2011, people slept on the ground overnight for a spot in line.

A shift was underway, highlighted by Vine’s 2012 story: “Whereas the legendary spots of yore had been primarily rural, now the widespread hunger for sublimely smoked meat, coupled with the boon of instantaneous buzz and feedback, made it possible for urban upstarts to enter the scene.”