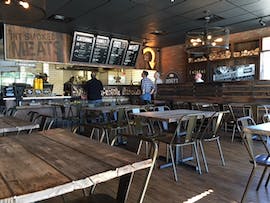 A New Look For Dickey’s

Dickey’s Barbecue Pit has more than 500 locations, but their newest remodel in Dallas is one of kind—for now. New graphics, lighting, and design flourishes give it an updated look that’s five years in the making, says CEO Roland Dickey Jr. in an article by Restaurant Business. It’s an… 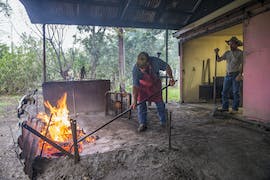 The Top 25 New and Improved BBQ Joints in Texas

It’s been two years since Texas Monthly published its last Top 50 BBQ Joints list. It was a feat of reporting that took me and my barbecue-eating cohorts across the state to eat at countless legendary restaurants, holes-in-the-wall, out-of-the-way joints. The work didn’t end when the issue went to press.

How Long Will You Wait?

Waiting in line for barbecue is a fact of life if you seek out the good stuff at prime times. You know when heading out to Lockhart, Taylor, or any number of barbecue destinations on the weekends that you’re not going to walk right up to the counter to place…

– No more freelance line-standers at Franklin Barbecue: You’ll have to wait in line for your own brisket now w/ Franklin Barbecue’s line holder ban http://t.co/SawW7eALrR pic.twitter.com/LNm34XuyxD — Eater Austin (@EaterAustin) October 4, 2015 – On the same day, the… 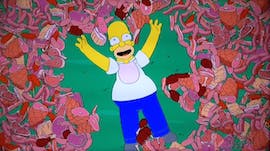 The Simpsons Do a BBQ Episode

With so much barbecue fluff on television these days, it was nice to see a serious discussion of smoked meat on . . . The Simpsons? The writers obviously did their homework for last night’s episode. Homer bought a smoker shaped from a meteor (that looked a lot like…

– Matt Garner, a central figure in the formation of Houston’s barbecue style, gets nice treatment in the Houston Chronicle. – Also in the Chronicle, food critic Alison Cook announced her 100 favorites restaurants in Houston this past week. Killen’s Barbecue was #4, CorksScrew BBQ was #31, Roegels Barbecue Co.

The West Wing Should Have the Best Wings

Barbecue and politics have long, shared history. A few months back we looked at some humorous political slogans calling for brisket as a 2016 contender. Aaron Franklin was even seeking some votes, but now it’s Brad Orrison of the The Shed Barbeque & Blues Joint looking for…

– I reiterated on the Texas Standard that sous vide meat with liquid smoke is not barbecue. – For The Love of Meat, a documentary about Texas barbecue and the pitmasters who make it will debut with a screening in Austin on 10/08. – Catch a… 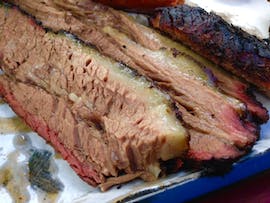 High-caliber Texas-style barbecue keeps popping up in the oddest places. Two weeks ago I found some great brisket in Los Angeles, and this past weekend the same thing happened in Portland, Oregon. I visited a tiny place called Matt’s BBQ, and its origin story is a wonderful microcosm that… 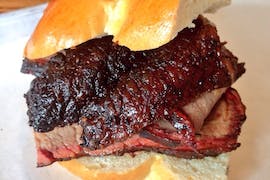 It’s my job to travel this great country—and parts outside Texas—looking for notable barbecue joints. But searching for good brisket in California can feel like waiting for a cool September day in Texas: both exist, but mainly in theory. After making my way through a solid Southern California itinerary…

– Staying healthy as a pitmaster can be a challenge: Health hazards of the barbecue pitmaster / @jcreidtx http://t.co/ZH9IzUgcya Great to hear Clarence is healthy again. pic.twitter.com/N1bWBiqRlK — Mike Morris (@mmorris011) September 9, 2015   – “Texas is an…

– A California barbecue cooks uses his camera time for an audition: – With much talk about diversity, or lack there of, in barbecue, Chris Reid delves into the multicultural barbecue scene of Houston. – Foodways Texas released this oral history of Dzuik’s Meat… 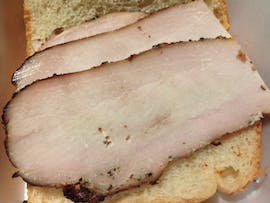 Smoked turkey is about to get expensive. An outbreak of avian flu that started back in March has decimated the turkey flocks in the US, especially in Minnesota. The state is the largest turkey producer, and they lost 10% of their yearly stock due to the outbreak.

– A new film is coming out about barbecue in East Austin: Slow Burn Trailer from Jeff Mertz on Vimeo. – You can attend the Kickstarter Launch Party for the Slow Burn film in Austin on 09/05. – The BBC reported American barbecue and…

– After a steady fall, the Texas cattle inventory is on its way back up. It’s already ticked up 6% compared to last year’s numbers, which represents the first increase since 2005. – A man in Waco tried to steal some brisket from a local grocery…

Last week I had the honor of being included in a list amongst a group of barbecue folks who I greatly admire. The list was entitled America’s Most Influential BBQ Pitmasters and Personalities. Those listed, at least the top ten, were all very deserving of recognition.

– From the Austin American Statesman: Austin is not banning barbecue. – “The city of Austin’s Health and Human Services Committee said a recommendation for a city-wide ordinance on barbecue smoke will not come from them.” – Politifact looks into the claim:…

– Jacob Brogan is upset about his love for grilling because its homosocial symbology might suggest “same-sex intimacy that deflects the supposed dangers of sexual contact between men but allows them to confirm their masculinity by excluding women.” – In Massachusetts, they can’t tell the difference between a brisket…

Yesterday Rush Limbaugh ran with a bogus story about Austin banning barbecue. The transcript now on his website, entitled “The Left Declares War on BBQ” echoes a bunch of outdated material from a recent blog post on “I Am A Texan,” which reported that the Austin City… 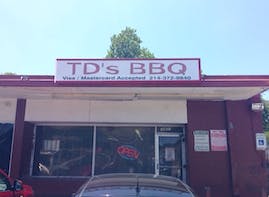 With what seems like three new barbecue lists coming out daily during the summer, I’ll forgive you if you didn’t notice the new one this morning. However, many did comment on Thrillist’s new one entitled “An Expert Panel Ranks the 5 Best BBQ Joints in Dallas.” This list included…

– The Austin Health & Human Services Committee will meet again on 08/03, and item #5 on their agenda is “Discussion and possible action on the initiation of a code amendment to mitigate the effects of smoke emissions from restaurants and mobile food vendors near residentially zoned areas.”…

– Good news! The price of beef plate short ribs is now at a three-year low. Those monster beef ribs are going to get cheaper. – Party like a pitmaster: – Two industry experts debate the effect that beef feedlots have on the environment. 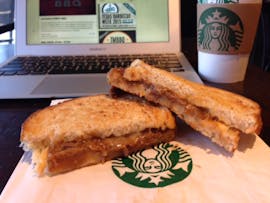 Here I sit, a contradiction personified. I’m typing in a Starbucks in Dallas wearing a t-shirt that reads “LOCAL” and drinking hot coffee on our first true 100 degree day of the year. I just finished the last bite of a sandwich I abhorred before I ever bought it, one…

With all the candidates thus far who have entered the 2016 run for president, the logos and mottos abound. Our new crop of Texas Monthly interns figured that none of the candidates matched the qualifications of one Aaron Franklin, proprietor of Austin’s Franklin Barbecue, so they made some alterations to the…

– Stubb’s barbecue sauce sold for $100,000,000 and TM’s Dan Solomon has the story. – CHD Expert provides some interesting industry numbers on the impact of barbecue joints in the country’s restaurant landscape. – Steven Raichlen is back with a new barbecue show called…

– Texas Governor Greg Abbott says that calling barbecue sauce “the most important thing about barbecue” was, in hindsight “my biggest regret” while in office. – Officials in China have seized meat illegally smuggled in from Vietnam. It was all previously frozen, and some of it… 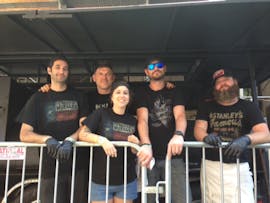 Today Wayne Mueller begins the final leg of his around-the-world barbecue missionary tour, a journey that has taken him to Japan (through Tokyo and three other cities); a stint at the World Expo in Milan; two flights through London, and one very long weekend in New York City…

– Travel + Leisure calls Austin “America’s next great food town” citing great restaurants like Franklin Barbecue and Valentina’s Tex-Mex. – Directly from Big Apple BBQ -> How not to trim a brisket:   – The Daily Meal asks for tips from some barbecue experts at…

– Southern Living’s Robert Moss released his list of the fifty best barbecue joints in the South. – Some in Houston aren’t happy about being snubbed by Moss. – Kansas City is named the best city for barbecue by Travel + Leisure. Don’t worry,…

– Wayne Mueller is at the World Expo in Milan, Italy serving up Texas BBQ: Texas meets Italy meet Texas. Wayne Mueller, the Master of the BBQ Pit, and Laurel Evans…

– A new class of the Barbecue Hall of Fame has been named. This year, Ed Fisher, Steven Raichlen, and Paul Kirk will be inducted. – Tim Carman of the Washington Post examines the rise of the urban barbecue joint, and credits Aaron Franklin for bringing…

– Austin’s so-called “smoke scrubber” ordinance is dead. Members of the Economic Opportunity Committee “voted unanimously this afternoon not to require BBQ food trucks and restaurants located near residential areas to install smoke scrubbers.” – A deep look at the price of beef in America:… 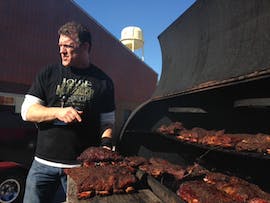 Wayne Mueller is going around the world on a Texas barbecue missionary tour. In a month’s time he’ll travel from Taylor, Texas to Japan, Europe, and back to the good old U.S. of A. In that time Mueller will cover about 25,000 air miles, and he’ll smoke a whole mess of beef ribs.

A James Beard for Barbecue

Aaron Franklin did it. Last night the owner and pitmaster at Austin’s Franklin Barbecue became the first ever pitmaster recognized in any “best chef” category of the annual James Beard Foundation Awards. (See this earlier post for more on the significance of the win) For the…

– Brisket prices are finally trending downward. Our national nightmare might be coming to a close. – A tribute to Annie Mae Ward who established the barbecue stand at New Zion Missionary Baptist Church in Huntsville, aka The Church of the Holy Smoke. – The Texans…

The wholesale cost of brisket has been increasing, sometimes dramatically, since 2013. Now, it seems to be tumbling from its peak. Back in mid-January the wholesale price for whole briskets (IMPS 120) was $3.59/lb and this week it has dropped to $2.74/lb. That’s the lowest price for brisket…

– A semi hauling more than twenty tons of pork butts caught fire on the Interstate in Kansas City. – The New York Times offered their take on the Austin barbecue smoker resolution. They looked at it in context of other odor-related cases. You’ll also learn…

– A Field Guide to the American Sandwich from the NYT. Texas chopped beef gets some love, but the best photo is from Iowa. – Louis McMillan of McMillan’s Famous Bar-B-Q in Fannin, Texas was recently recognized by the State Senate of Texas for his work…

– The Houston Chronicle asks “Have we reached peak barbecue?” – Texas BBQ Treasure Hunt examines just how much we pay for bones when ordering ribs at a barbecue joint. – The Austin City Council passed a resolution to study smoke mitigation requirements for… 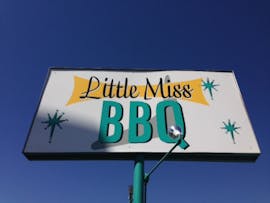 At 10:00am, the sun seemed nearly at full strength in the desert. One man had unfolded a chair and sat next to the door waiting for it to open. By the time it did, a line stretched at least forty deep, and the parking lot was so full that some…

– The Austin City Council will discuss the new barbecue smoke resolution in today’s council meeting. – The resolution has been revised from its original version that Aaron Franklin spoke out against on Monday. – The Austin American Statesman covered the resolution as well…

– A Missouri State Senator has begun a so-called Pork Steak Rebellion to rail against the EPA, claiming that they are trying to take away our grills. – The Daily Kos and Meathead Goldwyn provide some clarification about the EPA study, which is actually a little…

– BBQ in Florida has hope. This 4th grader derides the “BBQ” sloppy joes at his school cafeteria:   – The beef supply in 2015 is projected to be the lowest since 1993. – Some folks upset with the upcoming USDA dietary guidelines, which will likely include… 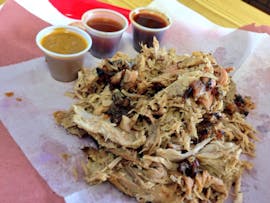 It was a unique day for barbecue in Dallas last Saturday. Whole hog isn’t an item you normally see on a barbecue menu in Texas, and Cattleack Barbecue isn’t normally open on Saturday. Owners Todd and Misty David were showing off what they had learned in January’s…