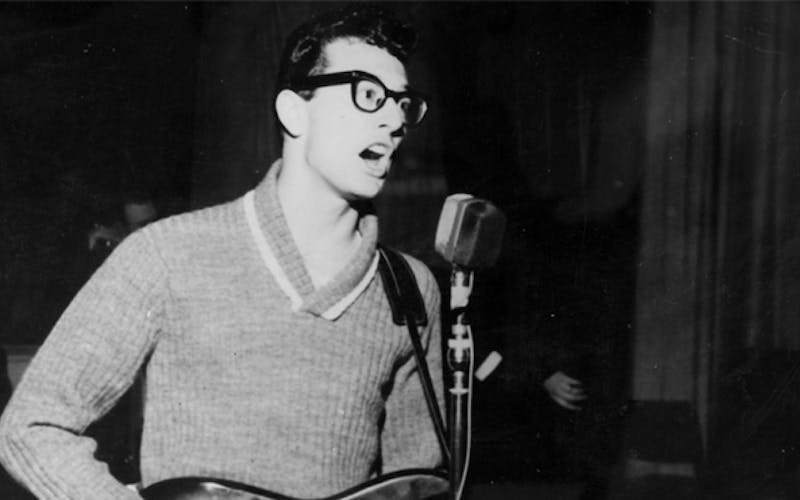 Buddy Holly was born in Lubbock, Texas, on September 7, 1936. As the front man for his band the Crickets, he was the pop sensation behind several Billboard-topping hits, including “That’ll Be the Day,” “Oh, Boy!,” and “Peggy Sue.” By the time he was 22, he had catapulted to fame, selling out venues and going on big tours with famous performers like Elvis. His rock and roll ride lasted a short eighteen months before he tragically died in a plane crash in Iowa, an accident that also killed fellow music icons Ritchie Valens and the Big Bopper.

The skinny, bespectacled kid grew up playing country music, and he got his first big break in 1955, when one of his bands opened for Elvis. “Hearing Elvis play live changed Holly forever,” Michael Hall wrote in “The Night the Music died,” a February 2009 profile chronicling the last days of Holly’s life. “He moved toward a more rockabilly sound and started the Crickets. Stardom followed fast: ‘That’ll Be the Day’ was his first hit, in the summer of 1957; then came ‘Peggy Sue,’ an appearance on The Ed Sullivan Show, and tours and shows with Chuck Berry, Jerry Lee Lewis, and Little Richard, who described him as a wild boy for the women.'”

He married María Elena Santiago, a receptionist at his publisher’s office, in August 1958. He soon moved to New York and split with the Crickets. He wanted to start his own record label and publishing company, but he was short of funds at the time. So to raise money for his ambitious plans, he signed up for a package tour called the Winter Dance Party. After a show in Iowa, Valens, the Bopper, and Holly chartered a small plane, which crashed in the early morning hours of February 3, 1959.

As with many tragic, early deaths, conspiracies circulated, with some Iowans believing “that some kind of onboard violence contributed to the crash.” Experts later refuted this theory after exhuming the Bopper’s body to confirm that he died on impact and not from foul play.

Holly’s legacy is what would be considered larger than life. His signature black, plastic-rimmed glasses have become a symbol of the chic geek, and his songs have been covered by rock heavyweights like the Beatles and the Rolling Stones. Don McLean’s hit “American Pie” is inspired by Holly and the day of the plane crash, and the indie-pop band Weezer first gained famed with their single “Buddy Holly,” which they released on September 7, 1994, the day Holly would have turned 58.

On September 7, 2011 (what would have been Holly’s 75th birthday), he received his star on the Hollywood Walk of Fame. The Buddy Holly Center, in Lubbock, is a shrine to the city’s hometown hero.