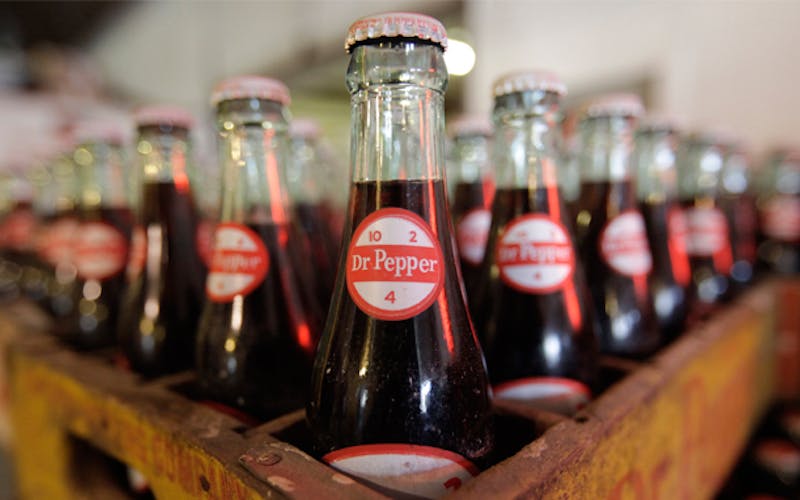 “About every three days, on the average, every man, woman and child in the state drinks a Dr Pepper,” Leo Janos wrote in the first-ever Texas Monthly. The days of advertisements claiming sugar and caffeine “brightens the mind and clears the brain” may be behind us, but the soft drink once known as a “Waco,” pre-dated Coca-Cola by five months and is as Texas as they come. The occasion of its invention on December 1, 1885 was #145 on our “Great Terquasquicentennial Road Trip,” while “Sip a Dublin Dr Pepper” was #10 on our Texas “Bucket List.” As Peter Elkind mused in July of 1985, being a “Pepper,” is a lot like being Texan: free-thinking, stalwart, and fizzy—with qualities no outsider will ever know or understand.

In Dr Pepper’s case, those qualities would be the absence of a period in “Dr Pepper” (here’s why) and its 23 flavors and spices, the secret formula for which is kept in a vault at Plano corporate headquarters (with back-ups in two bank vaults somewhere in the Metroplex). “No, I can’t tell you even one of the flavors,” Dr Pepper senior vice president of research and development told Brian D. Sweany in 2010. But prune juice isn’t one of them.

Equally good hot or cold, Dr Pepper also pops up as an ingredient in fudge, at fine Dallas restaurants and in BBQ sauce. Its greatest modern expression came via the town of Dublin, where the bottler known as Dublin Dr Pepper started offering the drink in 1891. A century later, Dublin was still sweetening its Dr Pepper with Imperial cane sugar, long after high-fructose corn syrup had become industry standard. “Over time, the word “Dublin” began to signify to aficionados of Dr Pepper what “prime” means to lovers of red meat,” Sweany wrote in his March, 2012 obituary for Dublin Dr Pepper.

That’s right: obituary. Once famously available in just six north central Texas counties, Dublin Dr Pepper had become more widely distributed in response to high demand, something the soft drink’s corporate parent, the Dr Pepper Snapple Group, had no problem with–until they did. “We call them bootleggers, but we mean that in the best way,” a company official said in 2006. But in January, 2012, the two companies terminated their relationship in a legal settlement. Dublin Dr Pepper is now Dublin Bottling Works, with its own line of naturally sweetened sodas, while Dr Pepper Snapple sells its own cane sugar version.

The death of Dublin Dr Pepper set off an explosion of love, grief and outrage on social media, with some people calling for a boycott. But Dublin’s Jeff Kloster, the grandson of original cane-sugar visionary W.P. Kloster, isn’t one of them. “I’d be lying if I said I’d never drink another Dr Pepper,” he said. “It’s part of our history. It’s still part of our life.”