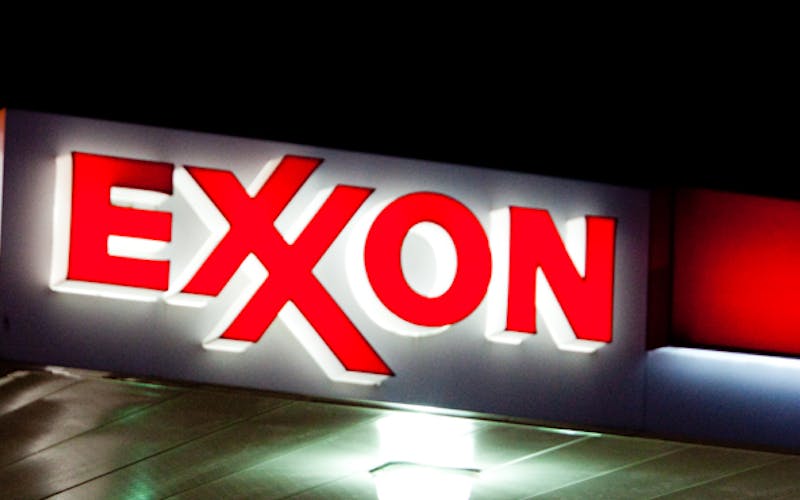 ExxonMobil is a multinational oil and gas corporation based in Irving, Texas. It’s “America’s second-biggest corporation—and,” as Bryan Burrough wrote for us in 2012, “by far the biggest anything headquartered in Texas.”

Exxon has a strong Texas heritage. It is the direct descendant of Humble Oil, which was founded in 1911 by a handful of friends in Humble, Texas. The company was, as contributing editor Nicholas Lemann wrote in 1978, “the class of the Texas oil and gas business—the best paying, the best staffed, the best at finding oil, and a Texas company, founded by Texans and headquartered in Texas.”

In 1919, Humble Oil became wedded to John D. Rockefeller’s Standard Oil, when the New Jersey-based company bought half of Humble’s stocks. During the fifties, Standard began to take a stronger hand in Humble’s activities, and in 1972 the two companies merged under the new name, Exxon.

In the seventies Exxon distinguished itself as being the Goldman Sachs of oil and gas—in 1978, Exxon spent $230,000 on each employee every year. But of course there was a hook: “Exxon likes to hire only potential presidents,” says one employee, “so there are an awful lot of unhappy people around.”

In 1989 Exxon’s Valdez tanker spilled hundreds of thousands of barrels of crude oil in the Prince William Sound of Alaska in what was then the largest oil spill in American history. It was a public relations nightmare. To save its image, Exxon invested in saving oil-logged sea otters (at a cost of $50,000 per head) and went on a “shopping binge . . . [for] jeans, flannel shirts, suspenders, and heavy boots” so that Exxon officials would look more like the aggrieved Alaskans. The spill cost an estimated $2 billion to clean up and recovery is not yet complete.

Exxon, like all huge companies, has been embroiled in numerous controversies. Mimi Swartz’s devastating 2008 piece “Below the Surface” tracks an endless legal battle between one of Texas’s largest ranches, the O’Connor ranch, and Exxon. The oil company was allegedly frustrated with the O’Connors’s very unusual contract, which granted the family access to all of Exxon’s records about the wells on their land, as well as fifty percent of all the oil profits derived from those wells. Exxon was found guilty by two courts of having prematurely plugged wells on the ranch that still had oil, and of sabotaging them with junk so that they could not be reopened and tapped. But the Supreme Court of Texas, notoriously predisposed toward big oil, unanimously found for Exxon.

In 1999 Exxon merged with Mobil in the “largest corporate marriage ever,” wrote Kathryn Jones, and in 2008 ExxonMobil became the most profitable company in the world, with $45 billion in profits. In 2009, as the market declined, ExxonMobil invested—a move typical for the corporation—purchasing XTO Energy, America’s leading natural gas production company, for $31 billion. ExxonMobil is currently not only America’s largest oil company, but the country’s largest gas company too.