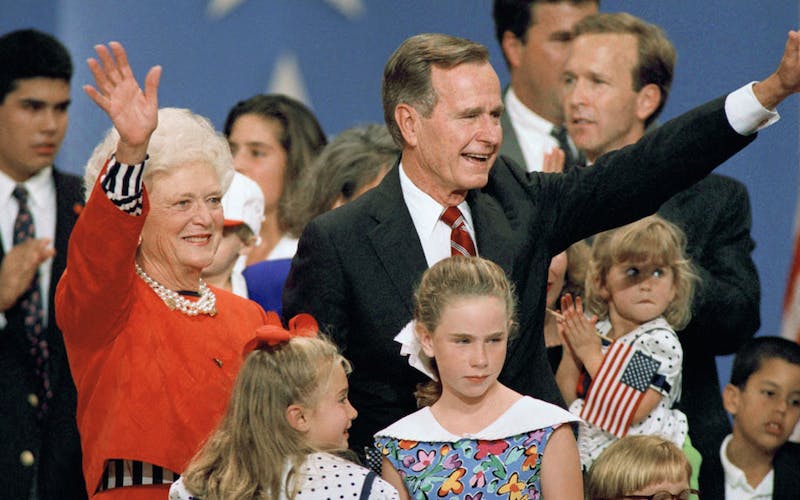 There have been three American presidents who have called Texas home—Lyndon Baines Johnson, George H. W. Bush, and George W. Bush—or four, if you want to include Dwight Eisenhower, who was born in Texas but moved to Kansas as a boy. George H. W. Bush, who was elected to the nation’s highest office in 1988 after serving two terms as vice president to Ronald Reagan, sometimes seems like the least Texan of all of them.

Bush was born in Massachusetts and raised in Connecticut. His family has deep roots in the East Coast’s political establishment, and his father was a U.S. senator from Connecticut for many years. Bush moved to Texas as an adult, in the late forties, after graduating from Yale, serving as a Navy pilot during World War II, and marrying Barbara Pierce, a similarly blue-blooded girl from New York’s Westchester County.

Even after he launched his political career in Harris County and made a fortune in the oil patches of the Permian Basin, Bush spent much of his time outside of the state. Before becoming vice president, he had held a number of powerful jobs in politics—he represented Texas in the U.S. House of Representatives, he represented the United States as the country’s ambassador to the United Nations, and he served as director of the CIA, among other things. But Bush never served in Austin, and his last job in state politics was as chairman of the Harris County Republican Party. At times, Texans have wondered whether Bush even felt the intense pride for the state that most Texans don’t even bother trying to repress. “Even allowing for the way government has changed in the quarter-century that separates the two Texas presidents, George Bush’s record for helping Texas is spotty at best,” Paul Burka wrote in 1992.

But despite all of that, George H. W. Bush is an exemplar of what is, or used to be, a common type in Texas politics: the pragmatic, business-minded conservative. Both parties have produced plenty of those. In 1970, for example, Bush ran for United States Senate, against the Democrat Lloyd Bentsen. The two men were so similar that pundits were bored to tears. “The only evident difference between them, judging from their own TV spots, seemed to be that Bush loosened his tie a little more and kept one hand in his pocket while strolling,” Al Reinert recalled several years after the election. And incidentally, Bush lost that race. Back in 1970, all things being equal, Texas voters favored the Democratic party.

Today George and Barbara Bush live in Houston. He is the oldest former president alive, and he has recently faced some health troubles; in January 2013 he was released from a Houston hospital after a bout of bronchitis forced him into a seven-week stay. His legacy as president has been largely obscured by the two Republican presidents who preceded and followed him—his old boss and his eldest son. But as is the case for most people, and most politicians, Bush’s strengths and weaknesses have always looked like two sides of the same coin. As president, he was criticized for being aloof, patrician, and tepid, but he was praised for his dignity, his moderation, his even head, and his even hand. Those may not be the archetypal Texas virtues, but neither are they foreign to us.