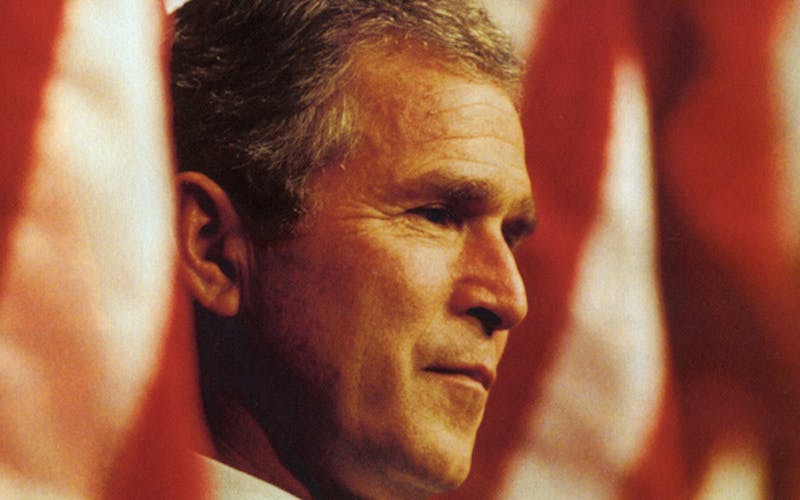 Texas Monthly’s first profile of George W. Bush was published in 1989, when he was thinking of running for governor. In some respects, Patricia Kilday Hart noted, he was an unlikely candidate: “His reaction to issues is largely ad hoc and, despite extensive briefings by Republican legislators, somewhat uninformed.” And for that matter, Bush had never held elected office before. (He had run for Congress in 1978, but he lost.) On the other hand, Bush did, as he told Hart, have good name recognition. His grandfather, Prescott Bush, had been a United States senator from Connecticut. His father, George H. W. Bush, was President of the United States at the time.

While the younger George decided not to run in 1990 (the office went to Ann Richards, a Democrat), W. did eventually go on to become one of the most influential and controversial Texans of all time. He was born in 1946, in Connecticut, but the family moved to Midland when he was a toddler, because his father was in the oil business. He went east for his education—Andover, Yale, and Harvard—but came back to Midland and got into the oil business. He liked baseball, so he bought a stake in the Texas Rangers. He met a school librarian, Laura Welch, at a backyard barbecue, and married her three months later. When he told his mother that he was leaving the Episcopalian church for the earthier denomination of Methodism, she picked up the phone and called Billy Graham for advice.

Bush was, in other words, apparently determined to be his own man, and mostly incapable of it. In 1994, when he did decide to run for governor, he was still trying to get out of his famous father’s shadow. He snapped when executive editor Skip Hollandsworth asked whether they could talk about the relationship: “’Are you going to write that kind of article?’ he asks me, his voice getting edgy. ‘One of those pseudo-psychological me-and-my-dad stories?’”

The stakes were higher than they might have seemed. Democrats still controlled the state legislature and many statewide offices, but they were adrift in terms of message. Republicans were simultaneously emerging as the party of power and showing signs of strain, as hard-liners were increasingly dissatisfied with the pragmatic, business-minded conservatives (from both parties) who had historically dominated Texas politics. The result was that Bush came to power at a critical moment in state politics. “He is in a position to be a pivotal figure in Texas history,” senior executive editor Paul Burka wrote in 1994, immediately after the election.

Somewhat improbably, Bush seemed to become just that. One hundred days into the governor’s first term, Burka offered an update: Bush was “batting a thousand.” He had campaigned promising to pursue four things—education reform, tort reform, welfare reform, and tougher juvenile justice laws—and made headway on all of them, with an unaffected manner that mollified the left while insulating him from the far right. Over the next six years, the governor’s career wasn’t perfect, but it turned out to be better than anyone expected: knowledgeable, disciplined, and determined.

By the end of the decade, the Republican takeover of Texas politics was complete, and Bush, who was reelected in 1998, had a record that would propel him to the Republican presidential nomination. On the national stage, however, Bush seemed to undergo another transformation. “A lot of people—even his close friends—are not quite sure how to describe Bush,” Hollandsworth wrote in 1995. A decade later, that was still true. “What happened to Governor George W. Bush?,” Burka asked in 2004. “Where is the guy we sent to Washington?”

Today, George and Laura Bush live in Dallas. He has largely avoided the post-presidential spotlight, perhaps because he wants to make way for the next generation of Bushes; his nephew George P. Bush is apparently running (for something) in 2014. Maybe he’s not sure what to think either. But George W. Bush has surprised everyone before.