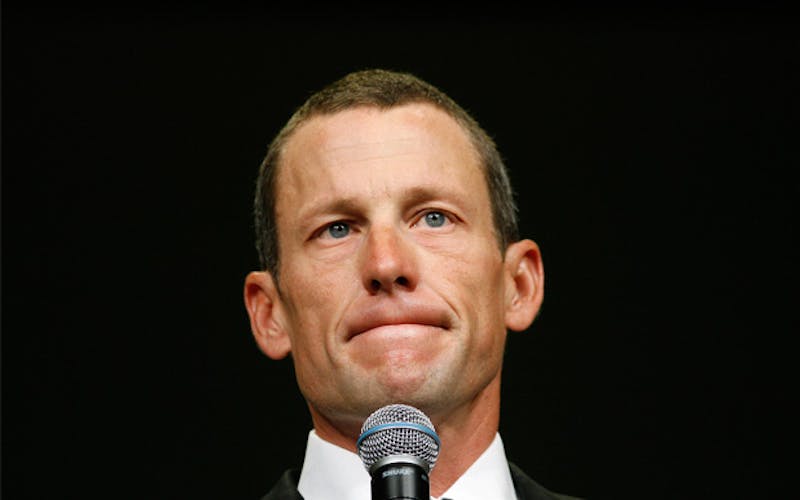 Lance Armstrong is a competitive cyclist who won the Tour de France seven times from 1999 to 2005. He was stripped of those titles in 2012 when the Union Cycliste Internationale acknowledged that Armstrong was guilty of using performance-enhancing drugs and techniques.

He denied the accusations for years, telling senior editor Michael Hall in 2001, “I can only assert my innocence. I’ve never tested positive; I’ve never been caught with anything.” But then in January 2013, according to Ian Dille, “Oprah got Lance Armstrong to publicly admit what we already knew: he used a variety of performance enhancing drugs to win seven Tour de France titles.”

There is no doubt that Lance is an extraordinary competitor. Born in 1971, he grew up mostly in Plano, where he cycled competitively in his teens before moving to Austin in 1990. In 1996 he was the top-ranked cyclist in the world when he was diagnosed with testicular cancer, which had spread to his lungs and brain. He went through four rounds of chemotherapy, and in 1997, doctors told Armstrong he was cancer-free. He founded the Livestrong Foundation (initally named the Lance Armstrong Foundation) that same year, the organization that adopted the yellow bracelet as its emblem.

In June 2012 the United States Anti-Doping Agency released more than one thousand pages of evidence that he had in fact used PEDs, including testimony from eleven of Armstrong’s former teammates and friends. USADA filed a report that said Armstrong enforced “the most sophisticated, professionalized, and successful doping program that sport has ever seen,” and the UCI accepted the findings. Armstrong did not appeal the decision. After denying doping allegations for years, he admitted his guilt in an widely-publicized interview with Oprah Winfrey in January 2013. A day later, the International Olympic Committee asked him to return his 2000 bronze medal.

Lance married Kristin Richard in 1998. The couple had three children before divorcing, in 2003. He later had two children with his girlfriend, Anna Hansen. He owns several Austin businesses including the Juan Pelota Café and the bike shop Mellow Johnny’s, and he is part owner of the downtown Austin bar Six Lounge. (Photo/Associated Press)