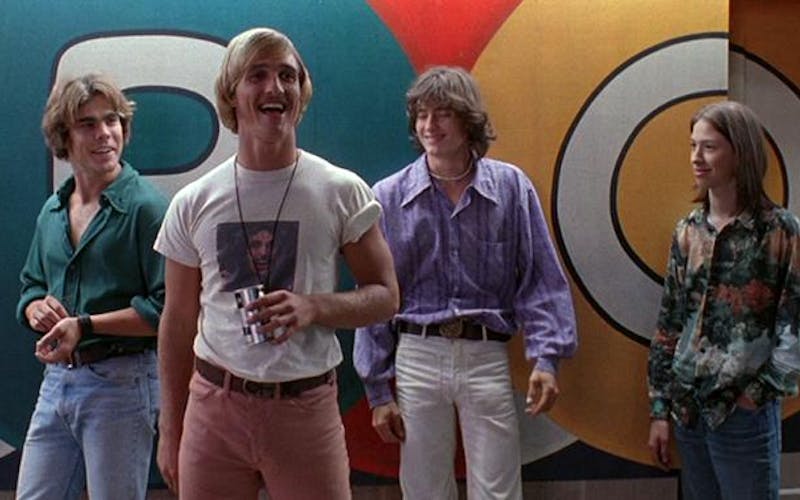 Matthew McConaughey, a Uvalde native, is one of Texas’s most famous actors—“a gossip-blog punch line and a box office monster” as John Spong wrote in 2008. “His mom, Kay, was a kindergarten teacher, and his dad, Jim, had been drafted by the Green Bay Packers, [but ran] a gas station and an oil pipe yard, and died at 64 while having sex with Kay on a Monday morning.”

McConaughey was a graduate student in film directing at the University of Texas Austin when he walked into the Hyatt bar one summer Thursday and introduced himself to Don Phillips, a producer who—after a long night with McConaughey, which included getting booted out of the bar—would cast McConaughey in his breakout role in Dazed and Confused. As John Spong recounted in his 2003 oral history of the making of the movie, McConaughey’s father died five days into the shoot. Walking around on set with the director Richard Linklater, following his father’s funeral, McConaughey mused, “I can still have a relationship with my dad, but I’ve got to keep him alive. He’s got to just keep livin’” That comment inspired the dialogue that saved the movie and launched his career. On the final night of filming, as the cast was standing on the football field, desperately searching for the words that would make for the movie’s climax, McConaughey busted out with the now-famous line, “The older you get, the more rules they’re gonna try to get you to follow. You just gotta keep livin’ man, l-i-v-i-n’”

That’s been McConaughey’s personal philosophy from the time Jason Cohen wrote our first profile of him in 1996 (the name of McConaughey’s production company? j.k. livin productions) to our most recent, 2008 profile of him and his new lifestyle brand, “called—you guessed it—j.k. livin.” McConaughey has appeared in many movies in that time, namely romantic comedies, such as The Wedding Planner, How to Lose a Guy in 10 Days, Failure to Launch, and Fool’s Gold, as well as dramas and quirky films like The Lincoln Lawyer, Bernie (co-written by Skip Hollandsworth and based on Hollandsworth’s 1998 Texas Monthly story “Midnight in the Garden of East Texas”), Killer Joe, and Magic Mike. His role in the Dallas Buyers Club as a bigoted man dying of AIDS earned him rave reviews and an Oscar for Best Actor in 2014.

All the while, we’ve lovingly tracked McConaughey’s triumphs (what a performance in Bernie!) as well as the moments he’s, let us say, bottomed out, such as when, in 2000, he was arrested for dancing “to the beat of his own bongos (and his own bong) while clad only in a bandanna bearing the logo of his beloved alma mater, the University of Texas.” Rarely has the title Bum Steer been more apt.