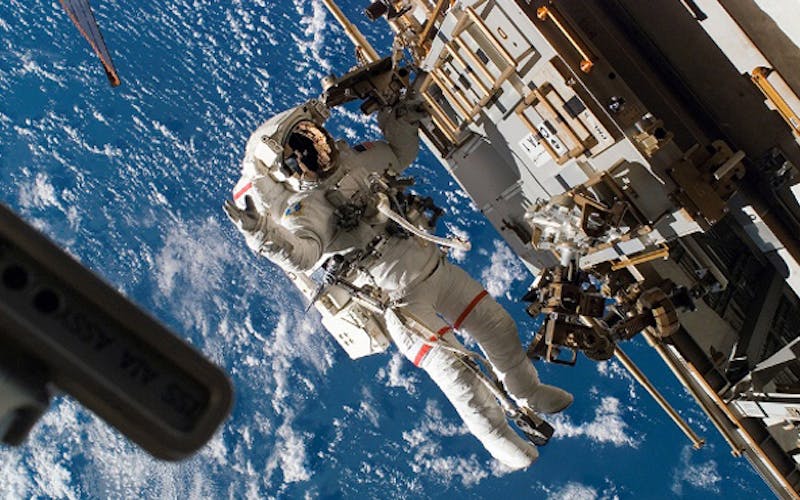 The National Aeronautics and Space Administration has called Texas home since 1963, when the Manned Spacecraft Center opened in Houston. The site was selected thanks to the lobbying efforts of Lyndon Baines Johnson, then vice president, and Houston Congressman Albert Thomas. “The road to the Moon lies through Houston,” Thomas said at the time.

Humble Oil gave Rice University 1,020 swampy acres to bequeath to NASA for the site. (In February 1973, less than a month after Johnson’s death, the Manned Spacecraft Center was renamed in the late president’s honor.) Astronauts—“tight-lipped, square-jawed and blue-eyed, dedicated patriots, fit heirs to the mantle of Jesse H. Jones and Glenn McCarthy,” in Reinert’s words—took to life in Houston, “the biggest up-from-the-bootstraps boomtown in the world, where … if you’re cagey enough, ambitious enough, tight-fisted and stout-hearted enough, you can Make It, climb to the top of the world and ride in monogrammed Cadillacs to the Petroleum Club.”

As the United States and the Soviet Union jostled to put the first man into space, the latter country prevailed in April 1961, when Yuri Gagarin orbited the earth aboard Vostok 1. Alan B. Shepard followed him into space a month later on Freedom 7, but it would be nearly a year before an American, John Glenn, would make a full trip around the earth. After Mercury and Gemini projects demonstrated that the United States could put a man into space, NASA turned its attention to the moon. President John F. Kennedy, speaking in September 1962 to a crowd of 40,000 gathered in Rice University’s stadium, declared that going to the moon is the “the most hazardous and dangerous and greatest adventure on which man has ever embarked.”

After three Skylab missions and a rendezvous with the Soviets in space, NASA took a six-year break from human spaceflight until the launch of Space Shuttle Columbia in April 1981. The Shuttle spent the next 30 years ferrying astronauts into low-earth orbit to conduct experiments, release satellites, and help build the International Space Station.

After the Challenger exploded shortly after launch in January 1986, Al Reinert reflected about what had gone wrong at NASA, finding that the space agency’s tragedy is that instead of viewing exploration as an end in itself, NASA had been “reduced to the level of petty politics, sucking up to every special-interest group that appears at the launchpad: congressmen, corporations, journalists, Saudi princes, generals and admirals, and teachers,” he wrote. Shuttle missions resumed after almost three years. Tragedy would revisit in the Shuttle program in February 2003, when Columbia disintegrated during reentry over East Texas. Gary Borders, editor of the Nacogdoches Daily Sentinel, described the next few hours in the newsroom as the police scanner “crackled nonstop” as citizens called in to report finding debris in their yards. To date, more than 84,000 pieces of Columbia have been recovered in more than 38 counties in Texas and Louisiana.

In 2007, S.C. Gwynne penned a Texas Monthly cover story about the astronaut love triangle, finding that the bizarre sex scandal “illustrated in excruciating detail just how fundamentally purposeless, money guzzling, overpressurized, and phenomenally dangerous the shuttle was 26 years after its first mission.”

The Shuttle, which Reinert dubbed the “the least sexy spaceship ever imagined,” would make its final flight in June 2011, flying 135 missions in total. Now, NASA’s future is unclear. A recent report from the National Research Council found the agency is suffering due to a lack of consensus on what its next human spaceflight goal should be. Should NASA send astronauts back to the moon? To Mars? To an asteroid? These questions have yet to be answered.