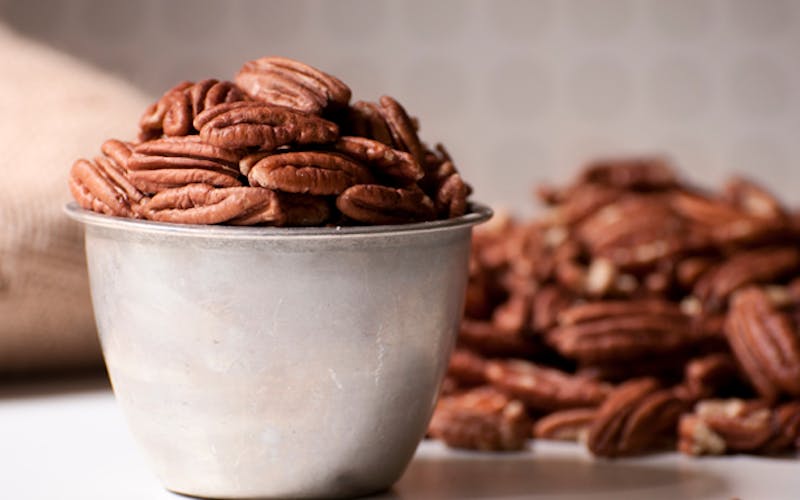 The pecan’s history in Texas dates back “65 million years, though it was not until about 16,000 years ago that it began to receive serious attention,” writes James McWilliams in a book excerpt published by Texas Monthly in 2013. “Although the Native American inhabitants of what we now call Texas never established pecan orchards per se, evidence suggests that they dispersed pecan seeds along riverbanks and visited these sites annually, doing their best to corner the market before the squirrels arrived.” McWilliams wrote about the nut in his book The Pecan: A History of America’s Native Nut in part because of China’s growing obsession with the pecan. “In 2000 China was so unfamiliar with pecans that it didn’t have a word for them,” he wrote. “Today it purchases nearly 100 million pounds a year, about a third of the entire United States crop.”

But Texans have long revered the pecan. Our first governor born here, James Hogg, insisted a pecan tree be planted atop his grave. The Thirty-sixth Legislature declared the pecan the state nut in 1936. In 2013, the Legislature further honored the nut by naming the pecan pie the official state pie. Texas grows millions of pounds of pecans each year, making the state one of the U.S.’s leading producers of the nut.

No Texas cookbook is complete without a pecan pie recipe, from the straight pecan pie to the gussied-up versions. And certainly no Thanksgiving in Texas can pass without pecans, whether it be in pie form or something a little different, like dressing studded with the state nut. But pecans rarely taste better than when you find a tree heavy with nuts, shake a limb until a few rain down, then sit down, crack them open, and eat the sweet meat straight from the shell.