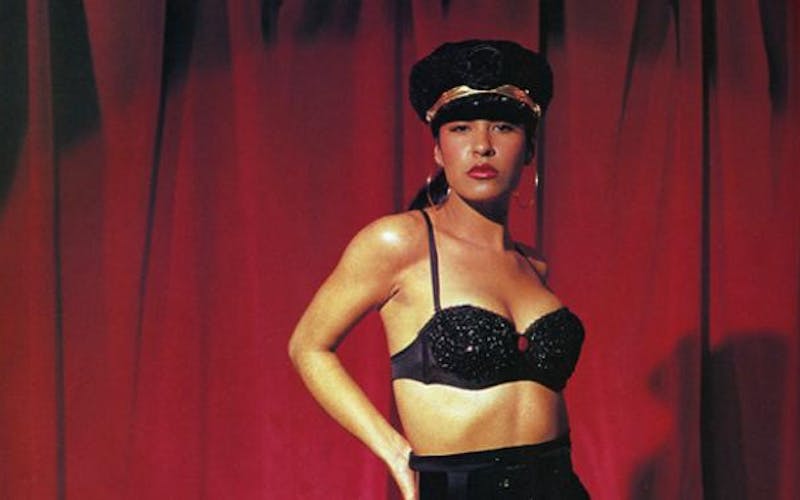 Selena Quintanilla-Perez, a third-generation Texan, was born in Freeport in 1971. The youngest of three children, she began singing at the age of eight. Backed by her father, Abraham, on guitar; her brother, A.B., on bass; and her sister, Suzette, on drums, Selena started her musical career at her father’s Mexican restaurant in Lake Jackson. “Oh my gosh, that girl could sing!” Rena Dearman, who began playing keyboards with the band when Selena was nine, recounted in Texas Monthly‘s 2010 oral history of the pop star. “I used to listen to her and wonder, ‘Okay, where is that coming from?’”

When the Quintanilla family hit hard times, the band—christened Selena y los Dinos—hit the road and played any gigs that Abraham could book. Although none of the kids spoke Spanish, Abraham taught them to play Tejano, the exuberant South Texas dance hall music he had grown up playing, which is often accompanied by Spanish lyrics. “With its vigorous polka beat pepped up by various influences—pop, traditional Mexican, Latin, country, rap, rhythm and blues—it has emerged as the sound of assimilation in Hispanic Texas,” Joe Nick Patoski noted in Texas Monthly in 1994, in the magazine’s first profile of Selena.

After a string of regional hits, Selena y los Dinos began getting major radio play in South Texas with their hit “Dame Un Beso” and a cover version of Ritchie Valens’s “La Bamba.” The band’s popularity quickly grew in Mexico and Central America. Guitarist Chris Perez, who would later marry Selena, joined the group in 1989. Under A.B.’s direction, the band developed a more modern sound that drew from funk and hip hop, and Selena’s music soon reached a wider audience. Her album Live! won a Grammy in 1993 for Best Mexican American Album, and her songs rocketed up the Latin charts. With a crossover album in the works that included several songs in English, she was poised for worldwide fame. Her performance at the Astrodome on February 26, 1995, broke all previous attendance records.

A month later, the president of her fan club, a San Antonio nurse named Yolanda Saldivar, shot and killed Selena at a Days Inn in Corpus Christi. After her murder, “the legend of the talented, beautiful, smart, clean-living vocalist who proved you can assimilate and have your culture too . . . spread from her hometown of Corpus Christi throughout the world,” Patoski wrote in 1995. Street murals of Selena that evoked the image of the Virgin de Guadalupe popped up around the state, and more than 600 baby girls in Texas were named after her in the months after her death. Her crossover album, Dreaming of You, was released posthumously and debuted at number one on Billboard’s album chart, making it the second fastest-selling release by a female vocalist in the history of pop music.

“Selena has been canonized, sanctified, and resurrected,” Pamela Colloff wrote in her 2010 oral history about Selena. “There has been a glossy Hollywood biopic, a touring musical, and talk of featuring her on a postage stamp. In South Texas and beyond, she has been elevated from popular singer to something more ethereal: cult hero, martyr, patron saint. Thousands of her fans still travel each year to Corpus Christi, where her family’s recording studio—as well as her home, former boutique, grave, and memorial—has become Texas’s own Graceland.”