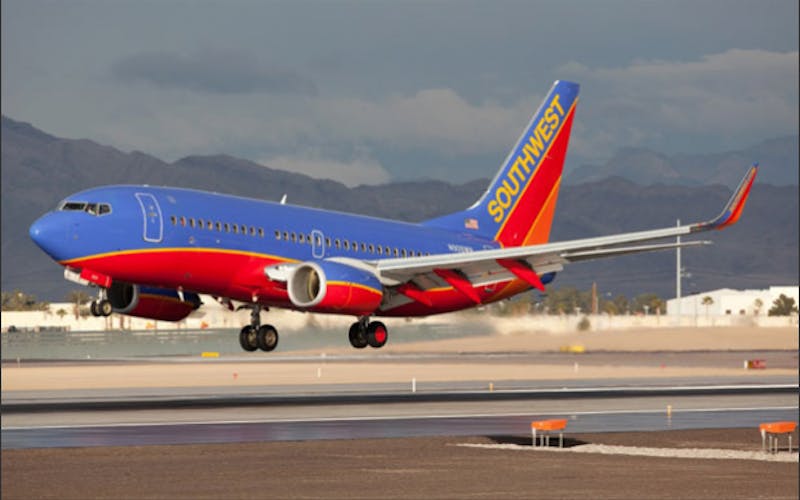 The mother of all low-cost carriers got its start as a triangle scrawled on a bar napkin. The corners represented San Antonio, Dallas, and Houston—the three cities to be connected by Southwest.

Rollin King presented this picture to Herb Kelleher in 1967, and Kelleher quit his law job and began defending Southwest against the airlines threatened by the very idea of Southwest. The single state airline, which wasn’t tied up in any federal regulation, had the potential to offer low fares, a business tactic James Fallows wrote about in “The Great Texas Airline War,” our first piece covering Southwest in 1975. (He correctly noted that the fate of Southwest would preview the fate of American airlines after deregulation.)

Flying point-to-point was one of the main innovations of Southwest. That and keeping costs really, really low. Tickets were cheap because there was no food on flights, no seat assignments, no classes—as contributing editor Jan Jarboe Russell wrote in 1989, “everyone was treated the same.” Southwest didn’t charge cancellation fees, or bag fees, and they had quick turnaround times, so that two years after its first flight, Southwest’s flight schedule, as senior editor S. C. Gwyne wrote in 2012, “began to resemble a bus schedule.”

What Southwest lacked in frills, it made up for in spunk. As Colleen Barrett, Bill Kelleher’s longtime secretary and the president of Southwest from 2001 to 2008, told Texas Monthly in 2003, “To make up for the advertising we couldn’t afford, we decided we were going to be fun, zesty, and a little irreverent to generate a buzz.” The models for their first ads were their “big haired flight attendants,” who, Russell wrote, “look like they went to the same West Texas high school.” Once on board, the flight attendants would strip down into red-and-orange hot pants and go-go boots. They sang songs, cracked jokes, and seduced clients with their Texas friendliness. When Southwest could finally afford advertising they gave their account to Austin-based GSD&M, a group of wild UT graduates flying by the seat of their pants and the fire of their imagination.

In the early days Southwest only hired one percent of all applicants, and “managers used such things as the humor test to weed out candidates,” Gwynne wrote. “Prospective pilots were sometimes asked to change into Southwest shorts during their interviews; if they weren’t good sports they weren’t hired.” Southwest attributes its success to its unconventional values: employees first, passengers second, shareholders third.

In the 2000s, Southwest profited from fuel hedging and was one of the only airlines to avoid bankruptcy. Southwest acquired AirTrans in 2010, adding 8,000 employees to their 35,000. Despite several union disputes surrounding the merge, Southwest Airlines remains one of the most consistently profitable carriers. They are the largest low-cost domestic airline, and, in terms of customers carried as of 2011, the largest airline period.